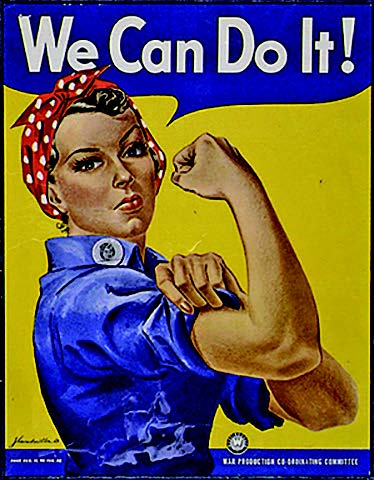 All of my life I had seen a White woman, fist up, a red bandana around her head, determination on her face and words above her saying “We Can Do It!” I never thought much about it until I attended a program this past summer where there were no Black women or any women other than White women celebrating the Rosies. As National President of the National Congress of Black Women, I responded to the invitation to attend the observance on the U.S. Capitol Grounds where we were asked to “Ring A Bell for Rosies. Tell America, ‘Wake Up! Listen to Rosies. ‘Pull together, not apart.” Great advice.

When I saw no Black women being honored, it dawned on me that there must be some Black women Rosies who worked during the war, so I raised the question. A wonderful 99-year old White women told me indeed there were Black women Rosie the Riveters. She sent me a lot of confirmation of what she said—and the contact with her introduced me to the son of a Rosie the Riveter. His name is Gregory S. Cooke—a career educator and historian. He is an award-winning documentary filmmaker.

The woman I met at the event sent me lots of information on Black women Rosie the Riveters. A call from Gregory S. Cooke followed. I learned that he had spent three decades fighting to illuminate African American agency in one of the most consequential events in human history. In his organization, he stated that his mission is to move our legacies from the margins to the main pages of American and global history.

I learned from him that his research took him to Bastogne, Belgium and on to Great Britain where he discovered 137,000 African American men and women waiting for D-Day—June 6, 1944. I learned from him that 1.1 million African American men and women risked their lives for Franklin Roosevelt’s “Four Freedoms,” but he also knew that most of them could not vote when they returned home; for them, only the “back of the bus” was waiting. But most significantly for him, he began collecting oral histories of African American veterans. 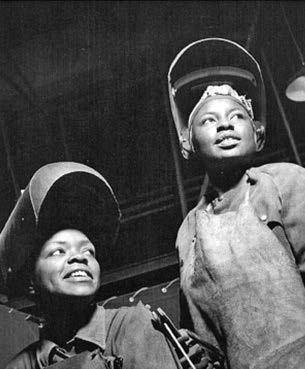 He found compelling stories about friendship, love, “brown babies,” and racial violence among Americans—byproducts of fraternization between “Choc’late soldiers” and white Brits. These stories, especially the ones about interracial dating, were quashed during the war because they were problematic for the American racial narrative. In Great Britain he encountered African American women in World War II — the 6888 Postal Battalion – 850 WAC’S who sorted mail for four million G.I.’s in Europe.

He dug deeper and stumbled upon 600,000 African American “Rosie the Riveters in the U.S. who helped build the “arsenal of democracy.” These women had courageously and defiantly fled economically and culturally stifling lives as domestics and sharecroppers to work, for the first time, in factories and in government and corporate offices. They also battled racism and sexism. One Rosie, he said, “It took Adolph Hitler to get colored women out of White women’s kitchens.”

This information gave Mr. Cooke a better understanding of his mother’s stories she had repeated to him during his childhood. He then understood his mother’s courage as a pioneer and being a history maker. How many more stories are there about the important work Black women have done? As a result of what he learned in his research, he created Invisible Warriors: African American Women in World War II. Our historic stories are so often left out of history. It is incumbent upon all of us to research and find other stories of our foremothers who’ve done great work that benefits us all.