The “Greatest Homecoming On Earth” was the scene of one of the greatest comebacks in A&T history last Saturday as the Aggies stormed back from a three-score deficit in the opening quarter to eventually outlast Campbell, 45-38, in a battle of first place teams in the Big South conference.

Sophomore running back Bhayshul Tuten continued to strengthen his case for the Walter Payton award, finishing with a game-high 256 yards and two touchdowns on 30 rushing attempts.

Time and time again, whenever the Aggies needed a big play, Tuten was there to respond. 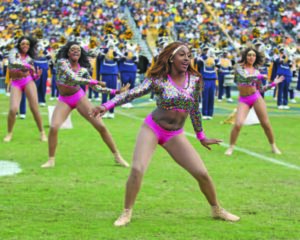 His 42-yard touchdown run in the opening quarter helped the Aggies keep pace after Campbell jumped off to a 14-0 lead, and he later added a breathtaking 72-yard touchdown run on A&T’s opening drive of the third quarter to spark the second half rally.

Defensively, the Aggies withstood a blitzkrieg 28-point scoring barrage by Campbell in the opening period. However, after making some key scheme adjustments, they were able to hold the Camels to just 10 points in the final three quarters.

The turning point came on Campbell’s first play of the second half, when A&T linebacker Jacob Robert made a one-handed interception on a slant route and returned it back for a 39-yard pick six.

“It was a character win,” said A&T head coach Sam Washington, who now has a 3-1 record on Homecomings since taking over the job in 2018. “I thought the guys showed true grit and no quit in the effort that was displayed. At halftime, they received the information given to them, and then they came out and made that happen, showing a lot of character.”

The challenge now for A&T will be to avoid an emotional letdown this Saturday when they return to Truist Stadium at 12 p.m. to host 1-7 Norfolk State.

The Spartans are led by former A&T assistant coach Dawson Odums, who was also a star defensive lineman at NCCU in the mid-90s when Washington served as the Eagles’ defensive coordinator.

It will be the 45th meeting between the former Mid-Eastern Athletic Conference rivals, with A&T holding the all-time series lead at 33 to 11. The last time the two met was in 2019, when the Aggies traveled up to Norfolk, Va. and routed the home team 58-19.

Odums said earlier this week that he knows the task for his ball club will be a daunting one, considering the style of football A&T likes to play.

“You gotta match their intensity,” Odums said of A&T. “They believe they are the bullies. You gonna have to put your mouthpiece in your mouth and say, we’re gonna fight.”

After starting the year 0-3, the Aggies have now won five straight games and are undefeated in Big South conference play. A&T currently remains tied at the top of the conference standings with 3-0 Gardner-Webb, but the Aggies control their own destiny for an automatic berth in the FCS playoffs.

For graduate quarterback Jalen Fowler, last week’s win over Campbell might be considered a career-defining moment, as he bounced back from an early interception in the redzone to finish with 233 yards passing and two touchdowns.

His main target was senior wide receiver Zach Leslie who finished with four catches for 124 yards and two pivotal touchdowns.

“I am very proud of this team in general,” said Washington. “If you look back on the first three ballgames, we were 0-3, and it seemed like nothing was going right for us. We weren’t going in the right direction. Most teams would have folded under those situations, but this team was able to stick together and LOA – love one another. We stood on that, and look at us now.”