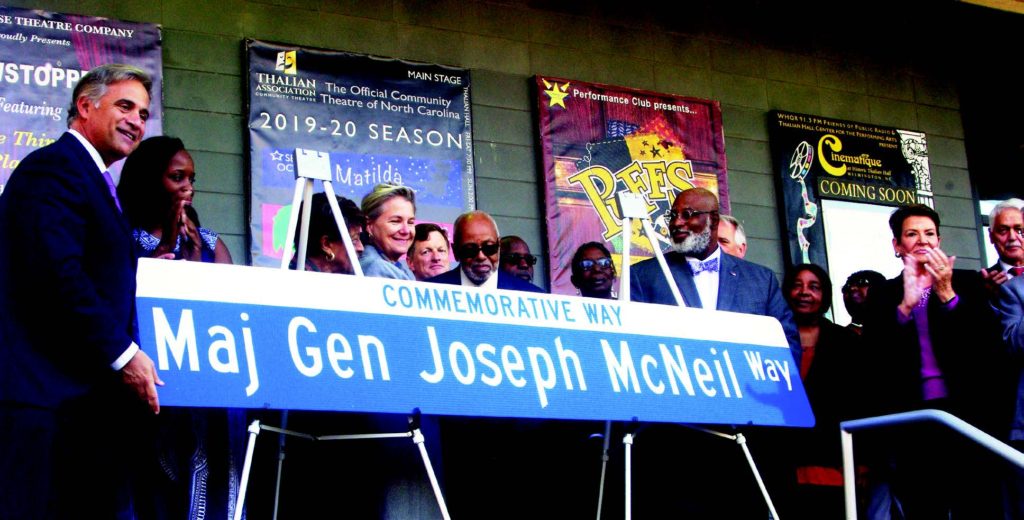 A ceremony and reception were held Saturday, Oct. 12 in front of Thalian Hall, at Third and Chestnut Streets.

On February 1, 1960, McNeil was one of four freshmen friends at A&T College, who dared to break the status quo of racial segregation by sitting at the all-White lunch counter of Woolworth’s in downtown Greensboro. 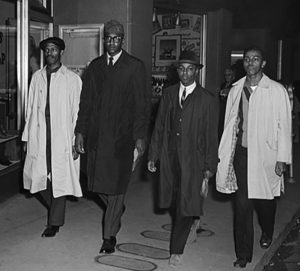 These four young men: David Richmond, Franklin McCain, Jibreel Khazan (né Ezell Blair, Jr.) and McNeil “walked together from the university’s library to the downtown Greensboro Woolworth store. Once there, they purchased items from a desegregated counter, and then sat down at the “Whites only” lunch counter where they were refused service.

“The group stayed until the store closed, and then left to return the next day. As media coverage of the demonstrations grew, more protests were being staged throughout the state of North Carolina, and in other Southern cities. As sales at boycotted stores began to be affected by the protests, store owners began to serve all customers in their establishments.
McNeil was involved with the formation of the Student Executive Committee for Justice, a joint organization between A&T students and Bennett College students, focused on the picketing of segregated downtown Greensboro establishments. McNeil would later participate in negotiations between student protesters, Woolworth’s management, and the Human Relations Commission.”

This act of civil disobedience by McNeil, David Richmond, Franklin McCain and Jibreel Khazan (ne Ezell Blair Jr.) led to lunch counter sit-ins across the South and the country and helped galvanize the 1960’s Civil Rights Movement. McNeil stood firm with his A&T Four brothers and others, who were determined to break the back of segregation across the United States. The four freshmen from A&T College became known throughout the world as the A&T Four.

A Wilmington native, Joseph McNeil grew up on South Eighth Street in the city and graduated with honors from Williston High School. He enrolled at A&T on a full scholarship in the fall of 1959 and graduated from A&T College in 1963 with a Bachelor of Science in engineering physics.

McNeil received a commission of second lieutenant in the United States Air Force and served his country in Vietnam, where he was a navigator, directing aircraft going into Vietnam. He led the re-fueling of KC 135s, a support aircraft for B-52 bombers, the largest aircraft in the Air Force.

When he left active duty, McNeil joined the Air Force Reserve and rose to the rank of major general. He also served as Deputy Director of the Federal Aviation Administration.

McNeil and his wife, Ina Brown McNeil, are the proud parents of five children.