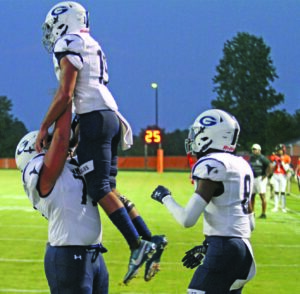 In a clash of the football Titans, both unbeaten, Southeast Guilford hosted the Grimsley Whirlies at Bill Slayton Athletic Field. It was the Metro 4-A Conference opener for both teams. Grimsley prevailed 35-7. The Whirlies capitalized on two Falcon mistakes by its special teams to take a 14-0 half time lead.

The Falcons tried an onside kick off to open the game, but Grimsley recovered on their 45-yard line. Six plays later, quarterback Ryan Stephens scored from 4-yards out. The PAT was good. Early in the second quarter, the Whirlies blocked an Aiden Bonds punt and scored seven plays later on a Jacarion Maynard run.

Grimsley converted a third-and-27 on the drive with a 36-yard reception from Stephens to Terrell Anderson.

Grimsley opened the second half with a seven play, 64-yard scoring drive. Stephens ran his second touchdown of the game on a 13-yard keeper. Grimsley posted 21 second half points to take firm control.

The Falcons scored on their next possession thanks to a long punt return by Kiyre Wall. After driving deep into Grimsley territory on fourth and 10, the Falcons’ drive was kept alive on a Grimsley penalty for holding. Elijah Davis scored Southeast’s only touchdown from one yard out. The Whirlies closed out their scoring on rushing touchdowns by Stephens’ 53-yards and Maynard’s 23 yarder.

Grimsley was led by senior quarterback Stephens with 11-of-17 passing for 137 yards, while rushing nine times for 88-yards and two touchdowns. Maynard, a senior running back had 14 attempts for 85-yards and two touchdowns. The Whirlies’ defense held Southeast to 40-yards in the first half and 201 for the game. The Whirlies’ defense also had two interceptions and blocked a punt.

“Anytime you go on the road in this conference, especially in a place like this, and find a way to get a win that’s good. It doesn’t matter what the score is,” said Darry Brown, Grimsley head football coach.