Whirlies advance to the NCHSAA 4-A State Championship 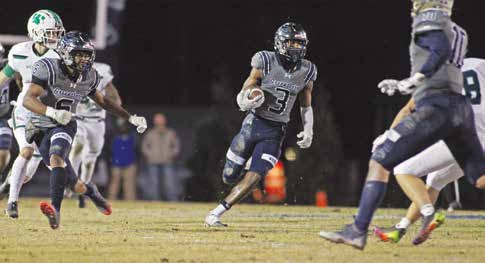 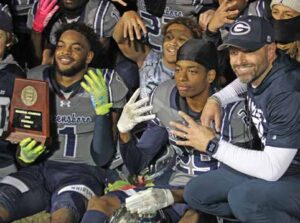 Grimsley and New Bern will play for the 4-A State Championship Friday night at UNC Kenan Stadium, in Chapel Hill. Game time is 7 p.m.

The Grimsley Whirlies earned this win the hard way with defense. Weddington Warrior quarterback Tyler Budge helped break two ties in the game with touchdown passes to Griffin Reimer and Zymill Patterson. Grimsley received a big offensive boost with less than a minute before the half when quarterback Ryan Stephens completed a 49-yard scoring strike to Terrell Anderson to tie it 21 all at the half.

Early in the fourth quarter, Weddington scored on a Tyler Budge touchdown pass to Brett Williams but the PAT was blocked. After a punt exchange, the Warriors drove to the Whirlies’ 12 yard-line before Grimsley defense forced a field goal- attempt which was blocked and retuned by Grimsley’s Chris Young to midfield.

Grimsley scored on a short drive on Mitchell Summers’ second touchdown of the game, a six-yard run. The all-important PAT was good by Jackson Henry lifting Grimsley to a 28-27 lead. The Warriors last chance was stopped by Grimsley’s defense on downs touching off a wild celebration among players, coaches and students storming the field as time expired.