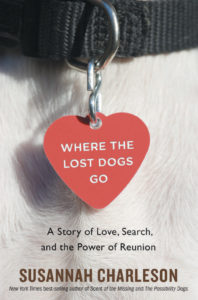 The panic can’t be described.

Your dog is missing. How did he get out? Where did she go? Most importantly, where is he now and how can you ever hope to find him? Do you run outside, call the neighbors, call her name? That panic is horrible, so be prepared by reading “Where the Lost Dogs Go” by Susannah Charleson.

The story sounds like a near-ending: because of her work with dogs and rescue groups, Susannah Charleson gets constant pleas to save and foster dogs that are scheduled to die by euthanasia. It’s heartbreaking and she does what she can, but on one hot Texas day, after receiving multiple messages about a filthy, smelly little mixed-something-breed that was doomed, Charleson did a little more.

She didn’t need another dog; she already had several, including some that were on hospice care but this little waif seemed different. He wasn’t giving up, and neither was Charleson: she fetched the new “family member” and named him Ace.

For Charleson, this was what she’d done all her life. Her parents had both been fierce animal advocates, and she grew up with pets they’d found and saved. Many of her best memories of childhood were wrapped in animal tales; both her parents seemed delighted that she’d carried on the efforts and in this case, they supported the idea of helping the little guy.
But Ace wasn’t like a lot of other strays.

He was loved once, says Charleson. He was well-mannered, happy, housebroken, and enjoyed car rides. Once his health issues were addressed, he got along well with other dogs and with people. What had happened to him that he’d ended up living in a culvert in a sketchy neighborhood?

While looking for Ace’s former owners, Charleson pondered that. Some dogs like to sneak out the door or under a fence for adventure. Others do it in fear. In any case, untold numbers of dogs go missing each year and, though there are ways to recover one that’s lost, some never return home again. It can happen to anyone.
Says Charleson: “Dogs don’t wander until they do.”

If you’re a pet lover, you know the panic you feel when your baby goes missing: it’s instant, helpless, urgent, and terrifying, all at once. “Where the Lost Dogs Go” can help make sure it doesn’t happen again.

But lost-dog-proofing advice isn’t all you’ll find here: author Susannah Charleson writes about her parents, who showed her compassion for animals and who couldn’t live with one another, but couldn’t live without one another, either. She includes her dog, Puzzle, in her tales, which will please fans of her other works. It’s kind of like having a book wrapped in a book wrapped in explanations for how rescue groups work and how readers can ensure their pets make it home if they’re ever lost.

That makes this story a valuable investment, one to read and save-in-case. For Dog Moms, Cat Daddies, and pet sibs alike, if you don’t read “Where the Lost Dogs Go,” you’re missing out.

Terri Schlichenmeyer is the Peacemaker bookworm. She is a Dog Mom in LaCrosse, Wisconsin to loveable Lhasa apsos Louie and Wrenn.