This year’s game was higher scoring, but the West won once again, topping the East 33-14 behind a strong night on defense and a powerful running game.

The running back trio of Jabrii Carolina (Thomasville), Tre’von Hester (Page) and Akin Robinson (West Rowan) capitalized on big holes opened by their offensive line, with each back recording a run of 25-plus yards in the first half. Carolina and Hester each finished with a pair of touchdowns. 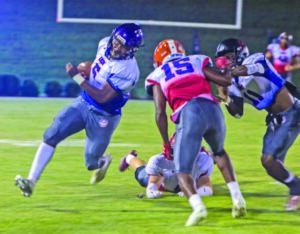 First-down runs by Carolina and Hester set up the West’s first score of the game, an 11-yard touchdown run by quarterback Jahmier Slade (Dudley).

Later on in the first quarter, the West defense forced its second three-and-out of the night, giving its offense great field position around midfield. A few big plays later by Hester and Carolina saw the West deep in the red zone, and Carolina finished off the drive with a 3-yard TD run, making it 14-0
Hester’s good night became better with a 29-yard TD run, with East defenders struggling to bring him down at the goal line as the West went up 20-0 late in the second quarter.

The East offense eventually got going just before the end of the half, with quarterback Hayes Pippin (Washington) connecting with Southern Durham’s Jewalace Holmes for a 22-yard touchdown on a go route, making it a 20-7 game at the half.

It was more of the same out of the break for the West, as its defense forced and recovered a fumble. A few plays later, Carolina punched it in from five yards out for his second TD run of the night, as the West went up 26-7.

But Holmes’ big night continued for the East, as the Southern Durham wideout hauled in a 24-yard TD catch from Hoggard quarterback Sam Jones with less than nine minutes in the third quarter.

Neither offense could get much going during the first few minutes of the fourth quarter, but the West eventually padded its lead with a one-yard TD run from Hester, his second score of the evening.