Warhol Artwork On Exhibit at UNCG 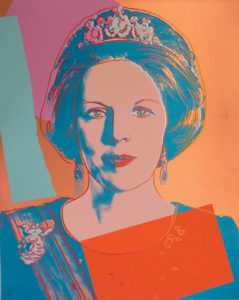 Image: Andy Warhol, “Queen Beatrix”, 1985, from the “Reigning Queens” series, screen print on Lenox museum board, extra, out of the edition. Designated for research and educational purposes only. Gift of the Andy Warhol Foundation for the Visual Arts, 2013.

A new exhibit titled “Andy Warhol: Prints, Polaroids, and Photographs from the Collection” is being featured now through Feb 3 in Gallery 6 at the The Weatherspoon Art Museum, located on the campus of the University of North Carolina at Greensboro.

Warhol shot his iconic color Polaroids of celebrities and society figures systematically in his studio. After interviewing the sitter, he would place the person in front of a plain white background for multiple photographs in various poses. Sometimes white makeup would be applied to the person’s face to compensate for the effect of the camera’s flash. Ceaselessly egalitarian, Warhol would solicit input from the sitter and whoever else was on hand before selecting the best image to use as the basis for a larger work.

In contrast to this methodical approach, he made his black-and-white, 8 x 10-inch photographs spontaneously using various automatic (point-and-shoot) cameras. Rather than serving as source material, their primary purpose was documentary. Warhol took a camera with him wherever he went and once said, “A picture means I know where I was every minute. That’s why I take pictures. It’s a visual diary.” These images allow us to tag along with him as he experienced everyday life.

Lastly, the four screen prints on display reveal Warhol’s broad approach to subject matter, ranging from the historic to the current, and from the legendary to the ordinary. Warhol favored the screen printing technique in part because it allowed him easily to make a large quantity of artwork in short time. The bright, aggressive colors of these prints activate their rather banal images.