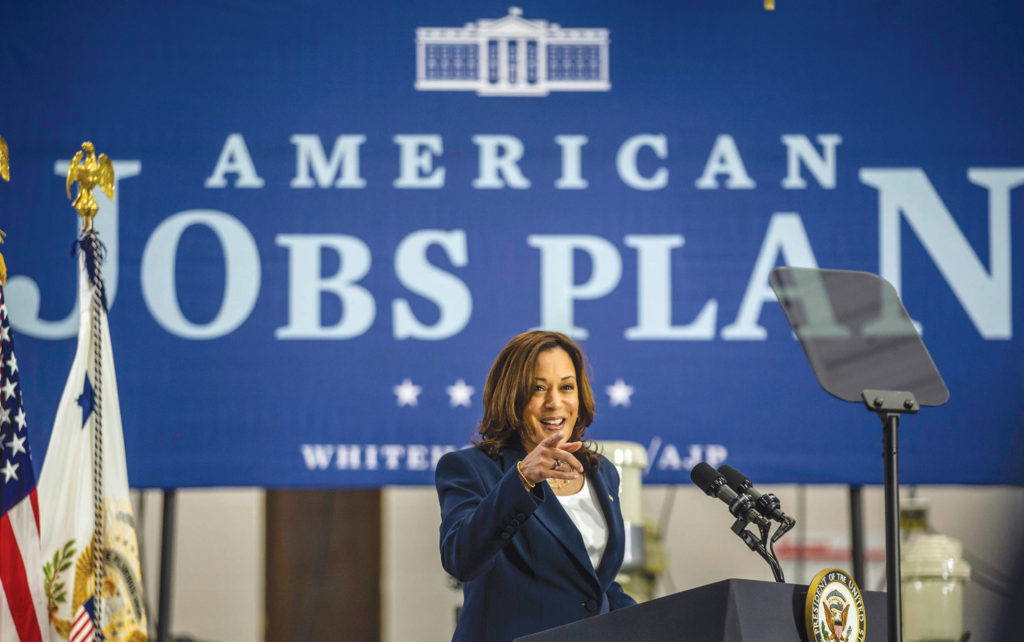 The Biden American Jobs Plan is about more than building the typical infrastructure of roads, bridges and public transit. According to Vice President Kamala Harris, it’s about reimagining how to improve the lives of Americans. Harris traveled to Guilford County to promote the American Jobs Plan at Guilford Technical Community College’s Jamestown campus. The reimagining of the future of infrastructure involves the creation of highly skilled technical jobs and education. Included in the plan are provisions to help Historically Black Colleges and Universities (HBCUs) and minority serving institutions (MSIs); invest in research and development (R&D), manufacturing, and training; and build a caregiving infrastructure.

The American Jobs Plan will:

In an exclusive interview with the Carolina Peacemaker, U.S. Vice President Kamala Harris described infrastructure as whatever gets you to where you need to go.”
To do infrastructure, Harris said, “That’s about pipe fitters and plumbers and electricians and the building trades — all of those folks who have the skills that will actually allow us to build up.”

She said it’s important for us to invest in strengthening our infrastructure and competitiveness by creating the good-paying, union jobs of the future.

The American Jobs Plan seeks to rebuild the nation’s infrastructure and economy utilizing the latest technical skills to train American workers for the 21st Century. And according to Harris, “The Biden Administration will make sure that the nation’s HBCUs and minority-serving institutions are not overlooked.”

The American Jobs Plan includes $20 billion to upgrade research infrastructure and laboratories at HBCUs and MSIs and $10 billion for investments in research and development (R&D) on those campuses.

“We want to make sure that they [HBCUs] continue to be competitive because, of course they are producing leaders in every field we can imagine.”

Vice President Harris, who is the first woman to be elected to the second highest office in the land, pointed out that the climate crisis has been a key component of how the American Jobs Plan has been designed. She addressed the dire need to fix the nation’s water infrastructure in drought-stricken communities across the nation. “We need to deal with the fact that historically, wars have been fought over oil. In a short minute of time, they’re going to be fought over water.” She said the U.S. needs infrastructure that allows for the capture and storage of water. “It is a vital resource that we cannot take for granted.”

The jobs plan will also invest $400 billion in the nation’s care economy by expanding access to quality, affordable home or community-based caregiving for aging populations and people with disabilities. The plan invests in caregivers, who are disproportionately women of color, and addresses racial disparities in access to home and community-based care. Harris said the plan “will make sure caregivers have all of the benefits in the workplace that come with important work. And if you need to go to work, part of the infrastructure you need is that you have the caretaking of your family members that otherwise you would be taking care of.” Harris was clear that caregiving must be affordable for families.

When asked about senior care or childcare provisions for people who may work nights or on weekends Harris said, “In the care economy, we want to build it up in such a way that people who work during hours that are not nine to five also have access to childcare and to home care.”

Now, the tough part, getting the bill through Congress, specifically the U.S. Senate; The American Jobs Plan will cost nearly $2 trillion over eight years. The Biden Administration has pointed out that this once in a lifetime plan will benefits thousands of Americans and accounts for a mere one percent of the nation’s gross domestic product (GDP) annually.

The Carolina Peacemaker is a founding member of the N.C. Black Publishers Association (NCBPA).