The Bears battled to turn a 31-point second half deficit into single-digits but their rally fell short despite a game-high 34 points from Junior Amir Hinton, who also finished with five rebounds, five steals and three assists. Junior DaVaughn Kelsie added 17 points and freshman Geremy Taylor chipped in 12 points and four rebounds.

The Bears chipped the deficit to single digits after scoring five-straight, capped off by a steal and slam dunk from Hinton to force the Trojans to call a timeout with 9:21 on the clock. Two steals and fast break dunks from Hinton helped pull the Bears and bring the score to 27-22.

VSU held a 38-34 advantage of the Bears on the glass which led to a 19-6 frame for the Trojans in second chance opportunities. Shaw never led the entire game despite its bench outscoring its opponents 66-13.

“I take my hat off to Coach [Lonnie] Blow and Virginia State on a wonderful season,” Shaw coach Joel Hopkins said. “They did a great job tonight.”

“It wasn’t perfect, but it doesn’t matter how many you win by,” said Blow, who has won three CIAA titles as a coach including 2010 at Saint Augustine’s. “We’re going to enjoy it, but we have more stuff to do.” 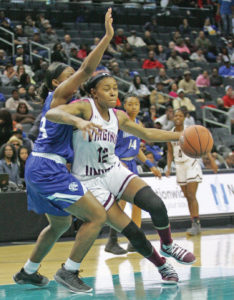 Jasmine Carter (#12), a Virginia Union senior forward, finished with a double-double – 18 points and 14 rebounds for the Panthers. Carter was also named the tournament’s MVP. Photo by Joe Daniels/Carolina Peacemaker

With the win, the Panthers (27-2) receive the conference’s automatic bid to the NCAA Division II Tournament where the team is expecting to be the No. 1 seed in the Atlantic Region. The back-to-back championships are the Panthers’ first since they captured the 1981 and 1982 tournament titles. The Broncos conclude their season with a record of 21-8.

“Fayetteville has done a great job,” said Panthers Head coach Ann Marie Gilbert “I’ve known coach King-Coleman for many years and she dominated the South Division last year at 10-0 and again this year she won her division so I first tip my hat to an outstanding coach who has done an incredible job with her team.”

McNeill’s 37 points brought her tournament total to 134, breaking the record of 123 points set by North Carolina Central University’s Jacqueline Pinnix set back in 1984. For her performance over the three games, McNeill was named the CIAA Tournament Most Valuable Player.

Carter finished the game with 18 points and 14 rebounds while Spivey dished out a game high nine assists.

Bennett paced the Broncos with 11 points while Clifton pulled down 11 rebounds.