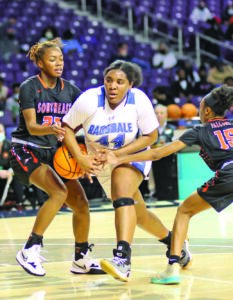 Ragsdale’s Christian Arwater (#44) is stripped of the basketball by Falcons Regan Harris (#23) and Kailey Gates (#15). Photo by Joe Daniels/Carolina Peacemaker

In day two of the 2021 HAECO Invitational, the top two women’s teams were upset. The Page Pirates sent the defending and top seed Northwest Guilford Vikings packing, falling 58-41. The Pirates led 22-6 at the break. The Vikings never got closer than 13 points during the second half. Page forward Hattie Sloyan scored nine of a team-high 29 points during a third quarter breakaway run. The score was 37-24 in Page’s favor at the beginning of the fourth quarter and within six minutes the Pirates’ score ballooned to 44-26. Northwest shot a dismal 3-of-34 from the field and 0-for-15 on 3-pointers. Kara Rumple paced the Vikings with 11 points. With the win, Page improved to 4-5 overall while the Vikings fell to 7-4.

In game two, Southeast Guilford Falcons sent No. 2 seed Ragsdale Tigers home by the tune of 47-41. The Falcon’s received great guard play from Sydney Roberts, who touched the Tigers for 32 points on 12-of-18 from the field and 8-of-10 free throws. Southeast moved to 8-2 overall while the Tigers dropped to 5-4. Christian Atwater, a Ragsdale center, led the Tigers with 16 points and eight rebounds.

In the nightcap opener, the Bengals of Greensboro Day School cruised to an easy 63-35 semifinal victory over the Golden Eagles of Smith High School. The Bengals opened with a 10-2 run and led 37-13 at the half. Late in the third quarter, the score was 43-17 in the Bengals’ favor. A fourth quarter run by Smith kept the score respectable. The Bengals had three players in double figures led by Jaydon Young and Nik Graves with 13 each, while Julius Reese added 12 points. Greensboro Day improved to 17-2, while Smith fell to 7-4 overall. NayShaun Hale led Smith with 11 points.

In the night’s final game, two old rivals clashed with the Grimsley Whirlies holding off the Page Pirates 50-41. With the win, Grimsley remains unbeaten at 10-0, while Page dropped to 4-5 overall.

The Whirlies jumped out to an early lead at 17-5 and led 24-15 at half time. A Page scoring run closed the score to 34-31 before Josh Scovens gave the Pirates their first lead at 39-38. But over the next three minutes they were outscored 12-2. Zack Wiggins led the Whirlies with 14 points and seven rebounds. Grimsley’s Tyler Albright and Jaden Watlington scored 12 apiece. Scovens led the Pirates with a game-high 22 points.