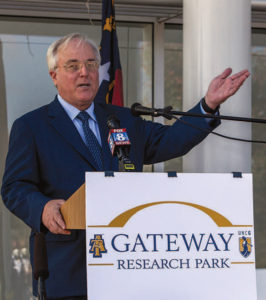 United Parcel Service (UPS), the multinational package delivery and supply-chain management company, announced that it will expand its presence in North Carolina with the addition of 592 jobs in Guilford and Alamance Counties.

According to Anthony Copeland, director of the North Carolina Department of Commerce, UPS plans to invest a total of $316.4 million at two sites – one in Mebane and one in Graham – over the next four years.

“When we did start shuttering things in North Carolina, we never shuttered manufacturing and construction,” said Copeland. “As we’re recovering, we’re seeing the rebound being faster than in some other places. This project demonstrates all the fundamentals of what success in economic development is.”

State officials estimated that the UPS expansion project will create $38.5 million in annual payroll in the Triad region and increase North Carolina’s Gross Domestic Product by approximately $1.4 billion over the next 12 years. Copeland added that the expansion will help alleviate North Carolina’s current 6.5 percent unemployment rate.

Founded in 1907, UPS is an Atlanta-based company that employs a workforce of 528,000 and operates out of more than 1,800 facilities around the world. UPS currently has 2,461 employees in North Carolina.

There are 451 new jobs set to be at a newly constructed package car center at the N.C. Commerce Center in Graham, which also shares jurisdiction with Mebane. 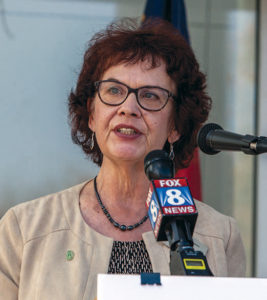 “Our vision was to have magnificent major companies like UPS locate here,” said City of Mebane Mayor Ed Hooks. “Our dreams are becoming fulfilled.”

The other 141 new jobs will be at the Greensboro Distribution Center on Industrial Avenue (in City Council District 1 represented by Sharon Hightower), which is the fifth largest UPS hub in the United States.

“An expansion such as this is a win for our community and our region. This investment speaks to the growth of supply chains and logistics and our industry sector in Guilford County,” said Abuzuaiter.

Jobs at both sites will average a yearly salary of $65,147 dollars.

Mayor of Graham, Jerry Peter added that new job growth will also attract other national businesses to the area and help build the housing market.

“Guilford County has always been a strategic location for transportation and logistics and continues to be an ideal for investment by companies such as UPS. Existing industry growth and expansion is critical to our county’s success,” said Phillips.

The N.C. Department of Commerce and the Economic Development Partnership of N.C. led the collaborative effort to expand UPS. This project is supported by a state job development investment grant worth up to $10.23 million over the next 12 years.

“This is an exciting time to be part of North Carolina’s economic growth. We look forward to bringing additional jobs that pay well to the Greensboro area as a partner in the community,” said UPS Director of Transportation Keith Hill, adding that UPS is also currently hiring for seasonal workers.

Understand the symptoms of caregiver burn out