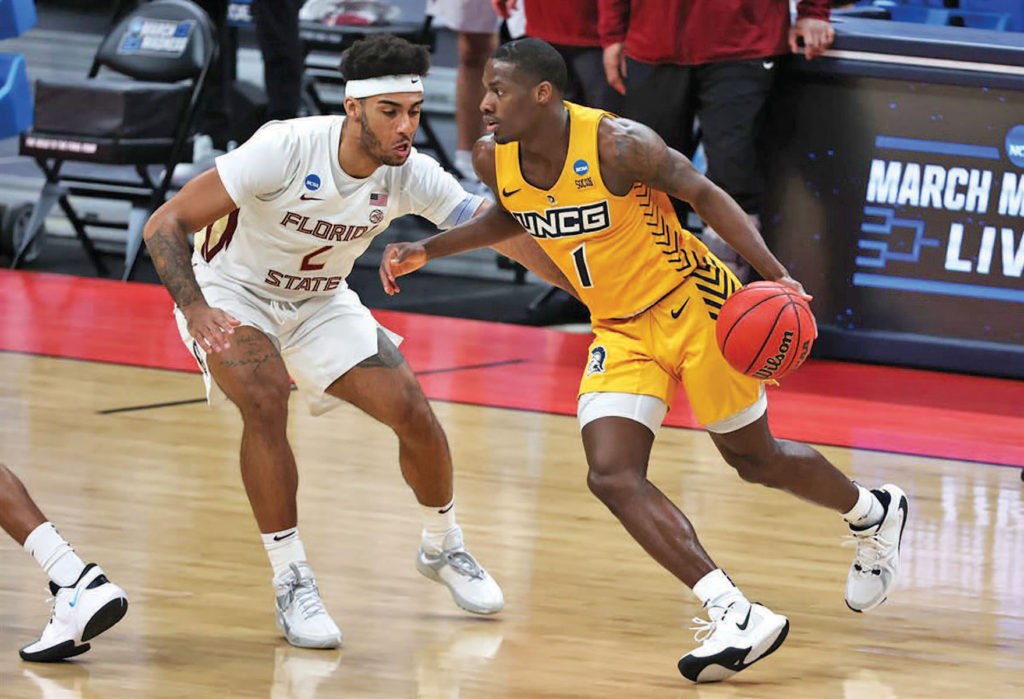 INDIANAPOLIS – The “Next Play” ethos of the UNC Greensboro (UNCG) men’s basketball program was on full display before a national television audience during the NCAA Division I championship tournament against Florida State Saturday afternoon at Bankers Life Fieldhouse.

Throughout a season of tension, turbulence, and triumph, UNCG never looked back on bad plays, possessions, or tough breaks. It continued playing until the clock reached zeroes. In falling short to Florida State, 64-54, UNCG showcased all of its resilience, tenacity and toughness.

The Seminoles were in a battle.

It’s a disappointing end to a memorable season for UNCG, which won 21 games, the Southern Conference regular and postseason tournament championship, and created lifetime memories during a journey through a challenging 2020-21 season.

“I think the thing that hurts the most is you feel like you had some chances,” UNCG head men’s basketball coach Wes Miller said. “You’re in a two-possession game in the last couple minutes. The biggest thing I’m proud of is no matter what happened, no matter how bad it looked at times or got away, our guys kept fighting.

Senior guard Isaiah Miller led the Spartans with 17 points. Sophomore guard Keyshaun Langley tied his career-high with five 3-pointers en route to 16 points. He ended the first half with a four-point play that brought the Spartans to within, 29-26 at intermission.

Miller finished his sparkling Spartan career with 1,967 points and 315 steals, which is the most in program history. There’s more that Miller accomplished, but his value went far beyond the individual accolades he accumulated during a season to cherish. He was the fuel that powered UNCG.

He had flashes of brilliance during the game, including a vicious dunk on an inbounds alley-oop play that made jaws dropped. Then during another scintillating sequence, Miller blocked a shot, saved the ball to his teammate as he was falling out of bounds and dropped in a floater to bring UNCG to within, 49-48 with 5:38 remaining.

Junior Kaleb Hunter added seven points including a wicked crossover move after a behind-the-back dribble for a layup during UNCG’s second half rally. Junior Mohammed Abdulsalam finished with five rebounds. Kobe Langley, Angelo Allergi, and Hayden Koval turned offensive possessions for Florida State into a hassle at times.
Isaiah Miller shared his message to his teammates during the post game press conference.

“I told them, the first thing when I hit the locker room, I told them I loved them,” said Miller on his words to his teammates in the locker room. “I said ‘Thank you for a wonderful season.’ We had a great season. Those boys were with me side by side. Win or lose, we just kept coming together. What I’m going to tell them when I see them, when we get back, I’m going to tell them like keep this thing going.

“As you can see, I think I’m a walking example when that comes to something. I mean, hard work is really going to show at the end of the day, and I think that’s what I’m going to tell them. Hard work, get back here, and we’re not just going to enjoy this moment next time. UNCG is always going to be my family. I think they’re going to conquer this moment at some point in time after I leave.”

UNCG came to Indianapolis expecting to win. That’s why, this hurts.

The Spartans walked out of Bankers Life Fieldhouse with their heads held high because when they could have folded; they competed like crazy. When it came time to dazzle, they did it with poise, confidence and character.

Raiquan Gray scored 17 points, Balsa Koprivica had 13 points and nine rebounds and Anthony Polite added 12 points for the Seminoles, who advanced to play Colorado in the second round.

As Isaiah Miller walked off the court for the final time, he shared a long hug with UNCG director of athletics Kim Record. Wes and Isaiah Miller shared a moment as well.

The Spartans overcame a 1-3 start to the season and a 1-2 beginning to SoCon competition. UNCG rallied from double-digit deficits to win games four times this season. The Spartans defeated 16 programs with winning records, the most of any NCAA Tournament team and won 10 road games, tied for the most in the nation. They also thrilled audiences each night with tough defense, highlight-type dunks and a special bond that will never be broken.

UNCG returns 14 players from this season’s squad so next year will be fun and they know Isaiah Miller will be watching, texting and supporting.

“I just told him after the game how much he’s meant to this program and to the university and to Greensboro and to me personally and all the people in that room,” Wes Miller said. “I told him how much I love him and how much I’ll never be able to express to him how much I love him. I don’t have the words to describe that. Then I told all those guys that he took our program a step further than the guys that got it to where it was when he walked in the door, and it’s their job now to take it another step further. That’s the best way to honor him.”