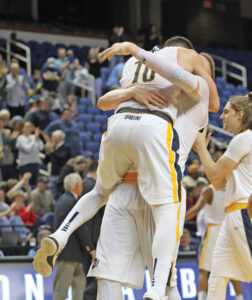 For the second-straight season, the UNCG men’s basketball team can call itself Southern Conference Champions and this year the Spartans are outright titleholders after posting an 88-75 victory over Samford Sunday afternoon (Feb. 25) at the Greensboro Coliseum in the regular season finale.

The victory secures the No. 1 seed for the Spartans in the upcoming SoCon Tournament and also assures UNCG of the league’s automatic bid in the NIT.
The SoCon regular season title is the second overall SoCon title all-time for UNCG and the fourth title in SoCon play as the Spartans also won two North Division championships in 2001-02 and 2011-12. The Spartans are the first team in the SoCon to win consecutive regular season titles since Davidson accomplished the feat in 2012-13 and 2013-14.

The victory improves the Spartans to 24-7 overall on the year and 15-3 in SoCon play. The 24 wins are the second-most all-time in program history, trailing only the 25 wins from last year’s team. Additionally, UNCG won its program-record 15th game in SoCon play, surpassing last season’s 14-win season.

The Spartans earned the outright overall title after East Tenessee State University dropped its third-straight game, falling Sunday at home to Furman. UNCG will be the top seed in the SoCon Tournament for the second-straight year and earned a bye in the first round. The Spartans open SoCon Tournament play this Saturday, March 3, in Asheville, facing the winner of No. 8 The Citadel vs. No. 9 VMI. Game time is set for noon at the U.S. Cellular Center.

The Spartans also closed out the regular season posting a 16-1 home record, including a 9-0 mark in SoCon play. UNCG is the only team in the SoCon to go undefeated at home this season. The 16 home wins are also a program-record, surpassing last year’s 13-win mark.

Senior forward Marvin Smith paced five Spartans in double figures and turned in a career-high performance on his senior day. Smith scored a career-best 26 points in the victory while also grabbing five rebounds and dishing out two assists in 30 minutes. Smith connected on 7-of-13 from 3-point land, accounting for over half of the Spartans’ 3-pointers.

Sophomore forward Kyrin Galloway came off the bench and scored a career-high 15 points in 17 minutes of play. Galloway scored 13 of his 15 points in the second half.

Junior guard Francis Alonso added 14 points and four assists in the win. Alonso connected on two 3-pointers, breaking his UNCG single-season record for made 3-pointers (102) as he now has 104 makes on the year.

Senior forward Jordy Kuiper added 10 points and five rebounds in his senior day, connecting on 4-of-9 from the field including two 3-pointers.

Freshman guard Isaiah Miller added 10 points, marking the eighth time in the last 12 games he has scored in double figures.

Samford came out of the break and started to hit shots, posting a 14-3 run to narrow the gap to 50-36 with 16:20 remaining. Adams scored six points in the run while Denzel-Dyson and Alex Thompson each hit 3-pointers. The Spartans bent but didn’t break as Smith stopped the run with a 3-pointer and later when Samford narrowed the gap to 13 points, Galloway connected from a distance to stifle the momentum.

UNCG would push its lead back to 20 at 79-59 with 3:50 remaining as sophomore James Dickey scored four points in quick succession. The Bulldogs slowly chipped away at the UNCG advantage, hitting three 3-pointers in the final four minutes but the Spartans converted at the free throw line to seal the win and the conference championship.