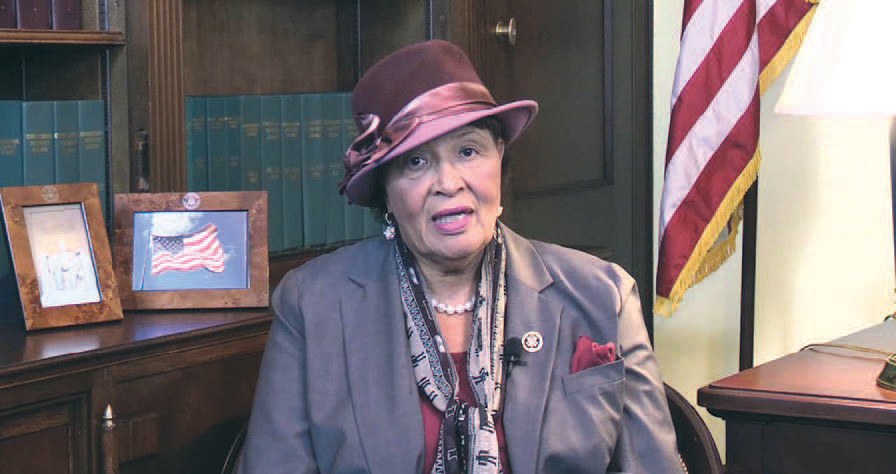 U.S. Rep. Alma Adams (D-N.C.) recalls getting emotional and upset during the attempted insurrection at the U.S. Capitol. She said she did her best to remain stoic as not to upset her young staff.
Photo courtesy of the office of U.S. Rep. Alma Adams.

“We could have all been blown up. This could have been much, much worse.”

To Congresswoman Alma Adams (NC-12), what could have been on the afternoon of January 6, 2021 is chilling enough.

But what did happen when a predominately White pro-Trump mob of thousands attacked the U.S. Capitol, seeking to either delay or stop the congressional joint session certification of 2020 presidential electoral votes, still has the third-term N.C. Democrat emotionally shaken to the point where she has serious concerns about the safety and security of the January 20th inauguration of Pres.-elect Joe Biden and Vice Pres.-elect Kamala Harris.

“Yes, I do,” Rep. Adams said, admitting during a Zoom interview Sunday that she doesn’t want to put anymore stress on her family. “I have trepidations about going back this week.”
But trepidations or not, Adams maintains that because she believes that President Donald Trump is an ever-present menace and danger to the nation until he officially leaves office on Jan. 20th, she must join her Democratic colleagues in impeaching him this week for “inciting violence against the government of the United States,” the second impeachment of his one term in office.

“He is not above the law and should not be.”

However make no mistake, with the FBI now warning of the prospect of armed protests in capitol cities across all 50 states, in addition to another violent event between now and the inauguration, Adams says there is now a “special urgency” to make the next few days safer, certainly safer than the riotous events of January 6th at the Capitol.

Rep. Adams says she was scheduled to be on the House floor at 1:15 p.m. during the joint session certification of Joe Biden’s Electoral College votes, but upon going to the Capitol, she was essentially turned away because the crowds from Trump’s “Saving America” rally had already begun forcefully entering the building.

She and her staff returned to her office in the Rayburn Building a short distance away, where they were startled by computer alerts and sirens to “stay in place” as the siege at the U.S. Capitol escalated.

The pro-Trump mob penetrated the Capitol, and all Congressional members not there yet were advised to stay in their offices and lock their doors until further instructions.

Adams recalls getting emotional and upset, yet doing her best to remain stoic as not to upset her young staff. “I was frightened, I was scared,” she recalls as she watched the live television coverage, coupled with the growing commotion just a few blocks away.

“It was just chaos everywhere, I couldn’t believe it. It looked like a war zone….it was a war zone. They had declared war on the U.S. Congress,” she said, recalling how the Capitol Police had earlier assured the Democratic Caucus during several meetings that security would be adequate.

“There is no reason why this shouldn’t have been caught,” Rep. Adams says. “There was a failure in terms of our security…”

It was not long before officers came to get Adams and take her to a secure location in the Capitol via the secure connecting tunnel system, along with other Democrat and Republican House members. However, once there, some Republican members, ignoring the mandatory COVID-19 precautionary measures, refused to wear masks, forcing leadership to order that they do.
Adams, already rattled by events around her, now had to try to isolate herself from her “colleagues from across the aisle.” She was scheduled to receive her COVID-19 vaccine shot the next day, and wondered if she could avoid infection until then.

On Monday, the day after this interview, Adams’ fear was realized when a 75-year-old House colleague announced that she had coronavirus, most likely contracting it from an infected Republican House member during the siege.

During their sequestration together, House members agreed they must complete confirming the electoral votes that night, “…otherwise [the pro-Trump mob] would have been the winners,” Adams said, noting that her family was not pleased when she informed them.

And that is what both chambers of Congress did. Despite the now well-documented attempts by Trump, his attorney Rudy Giuliani, and the pro-Trump mob of thousands – who had been cleared out by 8 p.m. when Congress reconvened, the certification process continued through the night, and Joe Biden was officially declared the winner of the November 2020 presidential election by 4 a.m. the next morning.

American democracy was delayed, but not denied.

Looking back, Rep. Adams is indeed chilled now by what she didn’t know at the time. Five people died, including a Capitol Police officer. A truck with guns and bombs was found nearby.

And a fast-thinking Black Capitol Police officer lured an angry group of White Trump rioters away from the Senate chamber, thus saving lives there.

“It was an incredibly frightening situation,” Adams now says.

She agrees with Democratic Whip Jim Clyburn of South Carolina that planning by the pro-Trump mob resulted in sensitive areas of House Democratic leadership being invaded that are not generally known to the public, proving that it was, according to Clyburn, “An inside job.”

Indeed, two Capitol police officers were suspended Monday for allegedly aiding and abetting the mob, while Democrat members expressed concern about a Republican freshman who reportedly was texting the whereabouts of Speaker Nancy Pelosi during the siege.

Pelosi was reportedly a target of the mob, along with Vice Pres. Pence, who had refused to do Trump’s bidding of stopping the certification process he constitutionally presided over. As video shows, the fever-pitched mob wanted to hang the vice president.

Rep. Adams dismisses the statement by Wake County Republican Chairwoman Donna Williams, who, after coming back from Washington, D.C., wrote in a letter that she doesn’t believe “patriotic Republicans started the riots.”

“I personally observed who appeared to be professional agitators inciting violence from the crowd,” Williams said.

Even if the GOP chair was talking about the violent Proud Boys group, who have been confirmed as being part of the mob who “started the riots,” there is little question, Rep. Adams said, that Donald Trump “gave permission” at his rally for his followers to use any means necessary to stop Congress from validating Biden’s victory, likening it to a battle.

“I do not believe these were professional agitators.” “…this was a riot,” she says, adding that Republicans have to take responsibility for the fact that they tolerated Trump and his antics for four years.

“[Republicans] should be ashamed of themselves. I don’t know how you live with yourself knowing you were part of this conspiracy.”

Adams also had choice words for the kid gloves with which Capitol Police treated the pro-Trump mob, versus the reinforced, fortified paramilitary presence that greeted peaceful Black Lives Matter protestors last summer after the killing of George Floyd in Minneapolis, Minn.

It is not lost on Rep. Adams that the country is at such bitter loggerheads as it is about to commemorate the life and work of Dr. Martin Luther King Jr. this weekend. If the civil rights leader were still here, and witnessed all that has gone on, what would he say?

“Knowing Dr. King’s work and works as I do, clearly he would not be happy at all,” Rep. Adams said upon reflection. “This is a dark day… a dark time in our country. He would encourage us; plead with us, to take the road of community… a peaceful community.”

Editor’s note – Afrique Kilimanjaro of the Carolina Peacemaker newspaper in Greensboro contributed to this report.