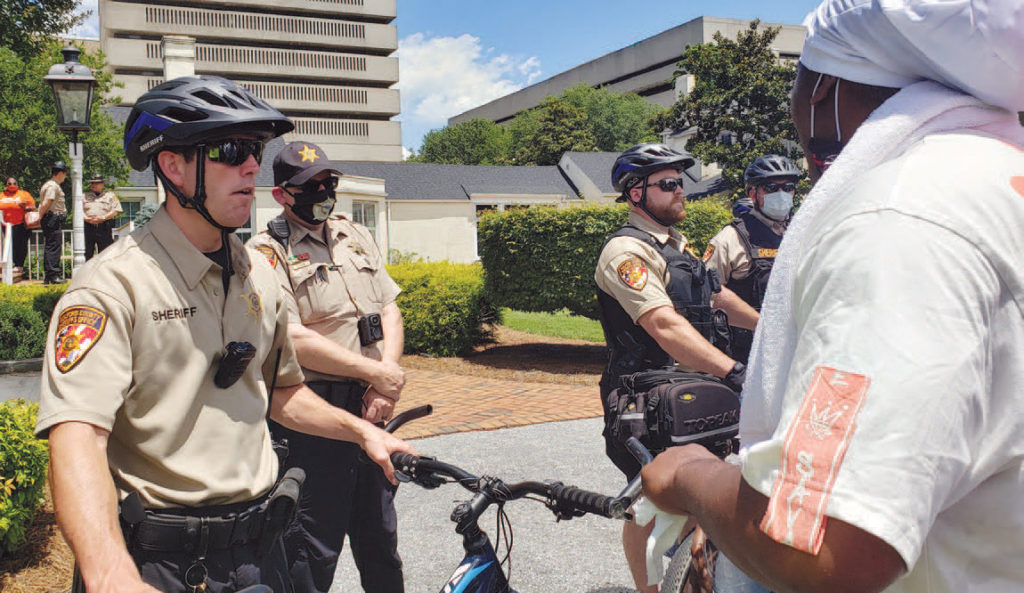 Artist, Prophet of the Streets (right), speaks to members of the Guilford County Sheriff’s Office while deputies block the entrance to the building. Photo by Chanel R. Davis/Carolina Peacemaker

Time can’t heal the hurt that emitted from the podium as Rochelle Thomas-Boyd spoke to a crowd of roughly 40 to 50 people in front of the Guilford County Detention Center that gathered to honor her oldest child, Tasharra “Tasha” Lachelle Thomas.

“It was like nobody cared. She got 2:12 seconds of news time,” Thomas-Boyd said. “I’m overwhelmed and my grief is not getting any better because I need justice for what they’ve done to my child. I need for individuals to be pulled and locked up.” 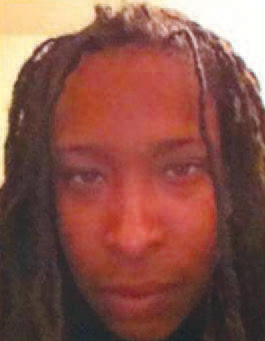 A “Justice for Tasha” rally was held on Wednesday, June 24, 2020 to bring awareness to the May 2018 death of Thomas who died in the custody of the Guilford County Sheriff’s Office. Thomas, 33, was in custody for three days for possession of a controlled substance and probation violation charges. An autopsy from the North Carolina Medical Examiner’s office stated that Thomas’s official cause of death was “sepsis due to infective endocarditis,” an infection in the heart that usually affects the inner lining of your heart chambers and valves, “due to chronic injection drug use.”

Thomas-Boyd said she doesn’t believe that’s the end of the story saying that her daughter often told her that the Sheriff’s would call and say she was dead.

“The autopsy said one thing, but we have something that says something else. Sepsis doesn’t leave you with broken bones, bruises and your hair pulled out. If anybody knows anything about sepsis, you know that you run a high fever and that you’re in excruciating pain. You would have to have had medical attention. Tasha did not. Sepsis did not kill Tasha, Guilford County Detention Center did,” Thomas-Boyd said. “She often told me ‘Mama, they going to come and tell you one day that I’m dead but just know that they killed me. They told me they tired of me.’”

Rev. Nelson Johnson from the Beloved Community Center was among the group of community organizers, community supporters and private citizens that showed up Wednesday afternoon to help support the family. Johnson said that it was Thomas-Boyd’s strength and the fact that this isn’t the first death of an inmate at the Guilford County Detention Center.

“We come together too often when the life of a beautiful person, usually Black, and in this case, a powerful, beautiful, Black woman’s life was snuffed out in this jail,” Johnson said. “We are here to break through the silence, the walls of obstruction and get some justice on behalf of Tasha and on behalf of the Thomas family.”

Kay Brown, a community organizer with Guilford for All and Greensboro Rising, told the crowd that to those questioning Tasha’s past and background.

“It doesn’t matter what she did. All Black lives are respectable and that’s not just to your terms.”

Local community activist Sandra Isley said that she invited former Guilford County Sheriff B.J. Barnes to the event through Facebook. Barnes was the Sheriff when Thomas died at the detention center.

“If he stood for what he claimed, he would be out there today to answer Tasha mama questions,” Isley said. “You can put away the paint brushes. You can put away the artwork because until we don’t have to bury our children behind bogus things, we know our Black lives don’t matter.”

Current Sheriff Danny Rogers did meet protesters outside, along with the Sheriff’s Attorney James Secor, after they marched from the Detention center to the Eugene Street Administration offices.

Responding to protesters chants for justice and demands for answers Rogers said, “No Justice, No Peace. I understand that. Do Black lives matter? Yes. I understand that as well.”
Speaking to the family, he told them “it happened before my watch.”

When cries demanding that video footage of Thomas’ death be released, Secor handed Thomas-Boyd his card stating, “If you want to see the footage, we will show you the footage.”
A statement was released later that afternoon from the sheriff’s office that, once again, state that Thomas died during the previous sheriff’s administration and that staff is working with the family’s attorney to share available information.

The release also said that “per the medical examiner, the sheriff’s office said that Thomas’ infection was caused by events before her arrest and not by any conditions or lack of medical attention in the jail.”

It goes on to read “the state medical examiner also determined that there were no physical injuries which caused or contributed to her death.”

Chanel Davis is a freelance writer with the Carolina Peacemaker. She is based in High Point, N.C.