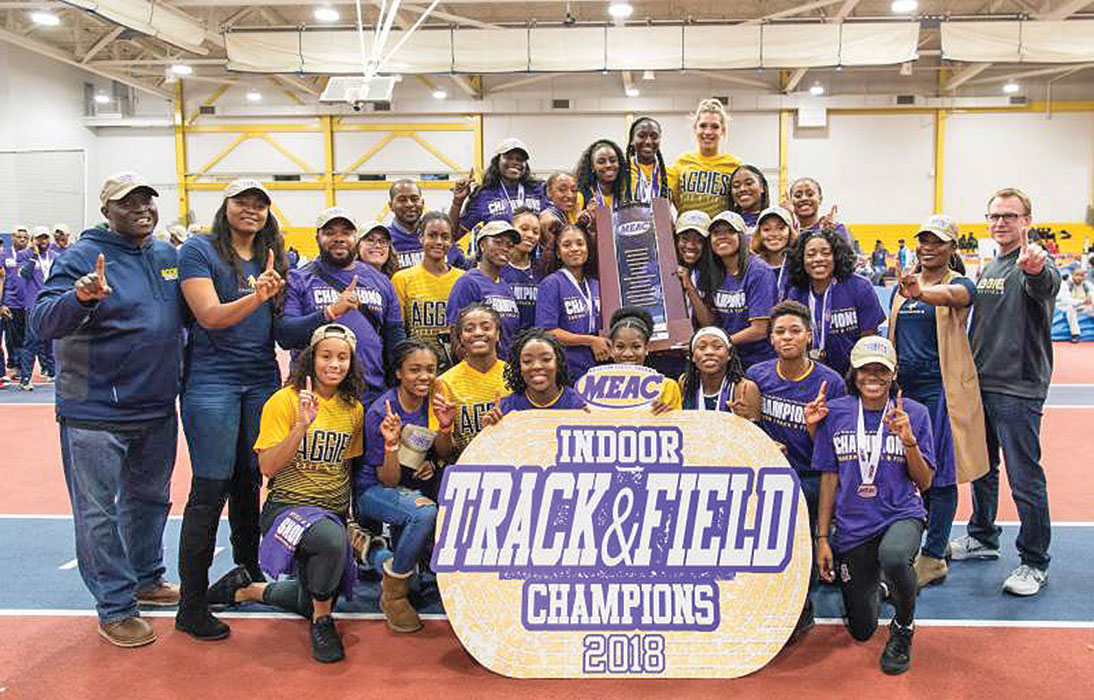 North Carolina A&T’s women’s indoor track and field team accomplished history by repeating as the Mid-Eastern Athletic Conference Champions by winning the 2018 crown at the Prince George’s Sports & Learning Complex. The men also won making N.C. A&T the first MEAC school to win back-to-back indoor men’s and women’s track and field championships since Delaware State did it in 1986 and ’87.

Not only did the women win their second straight indoor title, for the second straight year they blew away the field. A year after winning by 51 points over the closest opponent, the Aggie women won seven titles on the final day to smash the field with 173.50 points. Their closest team in 2018 was Bethune-Cookman’s 111 points. In total, N.C. A&T won gold in the women’s 4x400m relay, 60 meters, 200m, 400m, pole vault and triple jump. The Aggies won silver in the distance medley, 800m, high jump and long jump events while taking bronze in the long jump conquering the field. N.C. A&T director of track & field programs, Duane Ross, was recognized as the 2018 MEAC Women’s Indoor Track & Field Coach of the Year for the second consecutive year.

“I am extremely proud of how hard our athletes fought from start to finish,” said Ross. “Each and every one of our athletes left everything they had on the track this weekend. We had multiple athletes step up in various events, which should be the case in a championship meet. We had so many great performances, none more than Kayla White winning the 60-meter hurdles in MEAC record time and walking back to the start line and winning the 60 meters.”

Kayla White, a junior, ran the 60mh in 8.09 to break the conference record before taking down the competition in the 60 in 7.39 seconds. White broke her previous school record in the 60mh at the indoor conference championships. Akobundu (8.42) placed second behind White. Freshman TeJyrica Robinson finished seventh (8.64) and senior Morgan Knight placed eighth (8.65) to also score in the event for the Aggies.

The Aggies went on to sweep the next four events taking control of the standings. Sophomore Tori Ray won her second title in the 400m with a personal-best 54.99, while freshman Nia Lundy (56.13) was fourth, freshman Payton Russell (56.50) got her PR in fifth and sophomore Sun-Sara Williams (56.69) was seventh.

“Kristoni Barnes had an excellent meet as well,” Ross added. “She ran a fantastic competition 800m and ran extremely well on the DMR and anchored the 4×400 to its victory. I’m truly excited to see what she does in the future.”

The Aggie men won the 2018 conference championship by claiming five titles on Saturday to total 144 points. N.C. A&T won gold in the 200 meters, 60-meter hurdles, mile, triple jump and the 4×400 relay. They won silver in the 400m and 60m while earning bronze in the 60m, shot put and distance medley relay.

Duane Ross, N.C. A&T’s director of track and field programs, was recognized as the 2018 MEAC Men’s Indoor Track & Field Coach of the Year for the second consecutive year.

“This was one of the most competitive MEAC championships we’ve competed in,” said Ross. “Congratulations to both Bethune-Cookman and Hampton who didn’t make it easy. Our jumps crew performed well as they came away with wins in the men’s and women’s triple jump. Each and every one of our athletes left everything they had on the track this weekend. We had multiple athletes step up in various events, which should be the case in a championship meet.”

Junior Lasheon Strozier repeated as MEAC triple jump by having his best jump measure 49-feet, 6 ½ inches. He was followed by senior Marquise McGee pulling an upset in the mile run. McGee made a last-lap move for the lead holding off the runner-up Emanuel Too from Hampton to win gold with a time of 4:21.61. Senior Corey Aiken (4:22.52) placed fifth to put more crucial points on the board for the Aggies in the mile.

“Marquise McGee set the tone for the rest of the competition by coming up big by winning the mile,” said Ross. “Todd Townsend showed true leadership this weekend. It wasn’t just what he did on the track by winning the heptathlon and finishing third in the hurdles but how he led and inspired his teammates.”

In the 400m, senior Dajuan Harding (48.16) placed second and freshman Trevor Stewart (52.19) placed seventh. The Aggies won silver and bronze in the 60m behind sophomore Jaylan Mitchell (6.66) and junior Rodney Rowe (6.74). Sophomore Joel Thomas (6.78) followed both Mitchell and Rowe in fifth place. After a silver medal a year ago, Rowe won gold in the 200m finals with a time of 21.36.

Aaron Wilkerson’s 52-feet, 4 ¾ inches third-place finish in the shot put was the Aggies first podium finish of the day. Derrick Wheeler was eighth in the shot put at 47-feet, 4 ½ inches.
The 4×4 team of Rowe, Stewart, Johnson, Harding came from behind and won gold crossing the finish line at 3:14.60.

The throws were huge in the Aggies claiming the title. Derrick Wheeler came through in the weight throw by recording a 59-foot, 3-inch throw to beat Bethune-Cookman’s Sidney Holston by an inch. Aaron Wilkerson’s 52-feet, 4 ¾ inches third-place finish in the shot put was the Aggies first podium finish of the day. Wheeler was eighth in the shot put at 47-feet, 4 ½ inches.

“Derrick Wheeler had the biggest throw of his career in the weight throw to win,” said Ross.