Top Stories in Greensboro of 2020

The country faced a national pandemic in 2020, which forced schools and businesses to shut down, and impacted everyday life throughout the year. Virtual life took center stage with everything from community meetings to parades to graduations taking place online. Here is a wrap up of some of the events that happened in Guilford County. 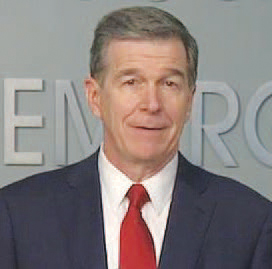 Schools and businesses were ordered to shut down in March 2020. Mass collection of PPE (personal protection equipment) like masks, hand sanitizer and gloves started. Cone Health set up the Greensboro Women’s Hospital to care for COVID-19 positive patients. N.C. Gov. Roy Cooper released a three-phased reopening plan for the state. Before businesses, schools and government buildings were allowed to reopen, social distancing guidelines were put in place that included limits on facility capacity, maintain six feet between people, wear masks in any public space and wash hands frequently. The N.C. Department of Health and Human Services provides free Coronavirus testing throughout the state.

Certain businesses reopened under Phase 2 of the state’s reopening plan in May. Restaurants, stores and hair salons could reopen, but capacity limits remained in place. Fitness centers were allowed to reopen in September. Phase 3 in October allowed bars to reopen for outdoor seating, as well as movie theaters and amusement parks.

The North Carolina Department of Health and Human Services (N.C. DHHS) announced a new COVID-19 County Alert System on November 17. The map system is designed to pinpoint counties with the highest levels of viral spread and offer specific recommendations to bring numbers down. In early December, two federally approved vaccines were distributed across the country, with frontline healthcare workers and the elderly being the first populations to receive the vaccine. The vaccine is free to all. North Carolina is expecting approximately 60,000 additional doses of the Pfizer vaccine and 176,000 doses of the Moderna vaccine, state leaders said at a news conference. The Moderna vaccine does not require ultra-cold storage and is slated to go to 59 hospitals and 97 local health department sites.

The governor instituted an executive order for a statewide curfew effective from December 11 – January 8, 2021, which requires bars and restaurants to stop the sale of alcohol at 9 p.m., and puts a “stay-at-home” order in place for everyone from 10 p.m. to 5 a.m. Bars and restaurants were later granted permission to sell to-go alcohol from December 21 to January 31. Gov. Roy Cooper announced plans on December 23 to extend the state’s evictions moratorium on residential evictions for non-payment of rent through January 31, 2021.
The community also stepped up during the pandemic, with churches and local nonprofits holding free drive thru health fairs and food distribution events to provide people with much needed supplies.

As of December 29, 524,279 people in North Carolina have tested positive for the coronavirus and 6,574 have died since April, according to N.C. DHHS. 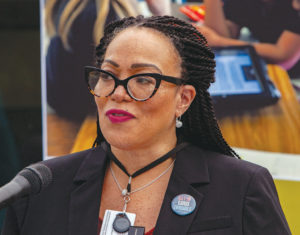 Dr. Sharon Contreras, who has worked as the Guilford County Schools superintendent since 2016

Guilford County Schools (GCS) shut down in March as per the Governor’s orders. The school year was completed remotely, with seniors graduating in drive-thru ceremonies. The district spent the summer designing various options for remote learning and in-person learning with socially distanced classrooms. With assistance from the N.C. Department of Public Instruction, GCS was able to put school bus mobile hotspots into the community and open learning centers to provide access to technology for students. The district also spearheaded a campaign to collect new and gently used electronic devices for the 73,000 students across the county. After multiple delays to reopening due to rising COVID-19 numbers and trends, the GCS facilities opened to pre-kindergarten, kindergarten, first and second grades on November 12. Students in third, fourth and fifth grades are scheduled to return on January 5, while sixth graders are scheduled to return to their classrooms on January 7. Seventh and eighth graders are expected to return to schools for in-person learning on January 11.

Guilford County voters also approved a school bond referendum on the November election ballot to authorize the county to issue up to $300 million in bonds for school facility maintenance and repair.

Not even a national pandemic could stop the 2020 Presidential Elections this year. The use of paper ballots was approved in 2019 by the Guilford County Board of Elections. Because of the virus concerns voters turned to mail-in ballots, which increased by 80 percent this year, according to county elections officials. Twenty-five early voting sites ran from October 15 – 31, which also included Sunday voting. The Guilford County Board of Elections received and hand counted more than 6,000 mail-in ballots. A recount was issued for the District 4 Guilford County Commissioner race between Republican incumbent Alan Branson and Democrat challenger, Mary Beth Murphy, who ultimately won the seat. The nine-member board, which has been controlled by a Republican majority since 2012, switched to a 7-2 Democratic majority.

Official election results were approved by the board of elections after a final hand count of all ballots on November 12. Democratic candidate and former U.S. Vice President, Joe Biden was elected as the next President of The United States. His running mate, California Senator Kamala Harris became the first woman of color to be elected as Vice President. The Presidential Inauguration is January 20, 2021. 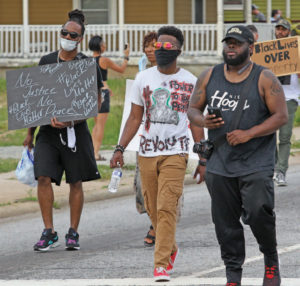 The video recorded death of George Floyd at the hands of Minneapolis Police officers on May 25, sparked a series of protests across the nation, denouncing police brutality against Black bodies. Riots, looting and property damage exploded in different parts of the country, including Greensboro. Greensboro Mayor Nancy Vaughan declared a curfew for the city of Greensboro beginning June 1 from 8 p.m. to 6 a.m. The curfew was met by resistance from parts of the community who believed the curfew was intended to silence those fighting for social justice. The mayor lifted the curfew on June 8.

Brian L. James, a 24-year veteran of the Greensboro Police Department (GPD), was sworn in as the Chief of Police in January, succeeding Chief Wayne Scott. Upon his hiring, the new chief held community forums in different neighborhoods and began instituting new policies that addressed the community’s concerns. Some of the policy changes included a ban on the use of chokeholds, the RIPP Hobble device, hogtying and officers shooting at moving vehicles. The new policies also include a clause that holds officers responsible for reporting another officer if they observe the use of excessive force. In September, the Greensboro City Council voted down an amended measure to require officers to get written consent before conducting a consensual search of a person or their property. Chief James assured the community that officers would continue to use body cameras to document all traffic stops and police interactions.

The family of Marcus Deon Smith, the 38-year-old unarmed African American man who died in GPD custody in 2018 after being hogtied officers, continued to push for justice and accountability from the police department. The state medical examiner ruled his death a homicide. The Smith family currently has a federal civil rights lawsuit against Guilford County, the city of Greensboro, eight officers and two paramedics. The lawsuit claims they violated Smith’s constitutional rights by improperly restraining him and failing to treat his underlying heart condition.

In July, the Greensboro City Council unanimously approved June 19 also known as “Juneteenth” as a paid holiday for City employees beginning in 2021. In October, the council issued a formal apology to the survivors of the 1979 Greensboro Massacre, specifically addressing the Greensboro Police Department’s role on that day that resulted in the shooting death of five people. The formal apology also included a “Morningside Homes Memorial Scholarship” to be awarded annually to graduating seniors from James B. Dudley High School.