Top 5 stories in Guilford County in 2021 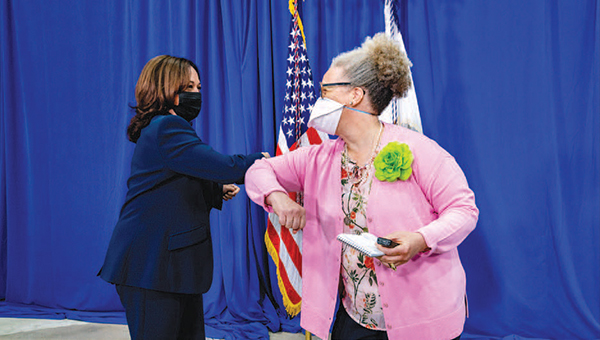 2021 opened up with a national push to get everyone vaccinated against COVID-19. The Guilford County Department of Public Health supported vaccination sites across the city, including the FEMA led mass vaccination site at Four Seasons Town Centre mall and one at the Greensboro Coliseum. The county also rolled out a mobile vaccination program in May to take the shots directly to the community. There were more than 65 approved sites, such as doctors’ offices and pharmacies, designated as vaccination clinics.
The county created a COVID-19 data dashboard on its website, much like the one The N.C. Department of Health and Human Services used, to provide more demographic data on people who are partially or fully vaccinated against COVID-19. Users are able to see vaccinations by race, ethnicity, gender and age group by county, by week and since vaccinations began. The Guilford County School board relied heavily on the numbers tracked by the GCDPH to make determinations on school reopening.

United States Vice President Kamala Harris came to Greensboro in April 2021 as part of a cross-country tour to discuss President Joe Biden’s American Jobs Act. During her stop in Greensboro she visited the Center for Advanced Manufacturing at Guilford Technical Community College in Jamestown, toured the Thomas Built Buses (TBB) manufacturing plant in High Point, and took time to sit at the F.W. Woolworth’s lunch counter at The International Civil Rights Center and Museum in downtown Greensboro.

The Steven Tanger Performing Arts Center opened for its first show in September, a performance by city native and Grammy Award-winner Rhiannon Giddens. The first months of the center included touring Broadway music “Wicked”, the Guilford College Bryan Series and Greensboro Symphony performances. Spearheaded by the Community Foundation of Greater Greensboro and numerous business organizations, the $93 million venue was built using City and private donations. It is named for the chief executive officer of Tanger Outlets, Steven B. Tanger, who pledged $7.5 million for the project.

At its December 21 meeting, the Greensboro City Council voted to hire Taiwo (Tai) Jaiyeoba as City Manager, effective February 1, 2022. Jaiyeoba succeeds David Parrish who resigned from the position on June 30 and Chris Wilson who has served as interim City Manager. Jaiyeoba comes to Greensboro from the City of Charlotte where he served in a dual capacity as Assistant City Manager and director of the Planning, Design and Development Department. He was a member of Charlotte’s Executive Leadership team, providing support to the departments of Planning, Transportation and Charlotte Area Transit Services.
2021 Municipal Elections have been delayed until May 17, 2022, due to litigation over redrawn state and congressional districts. All nine council seats, including mayor, are up for election next year. All candidates filing has been halted in the state. The Supreme Court is expected to deliver a ruling by January 11.

North Carolina A&T State University brought home a win to Greensboro this year with Track and Field athletes, Trevor Stewart and Randolph Ross Jr., taking gold medals for leading the United States in the men’s 4×400-meter relay in Tokyo. They are the first in Aggie history to win the gold medal. The last Aggies to compete in the Olympics were Troy Douglas and Ruth Morris for the games held in Barcelona in 1992.

After a yearlong hiatus, GCS students returned to school in January. In the midst of implementing a staggered reentry plan, the Guilford County School Board received criticism from parents who didn’t want their children wearing masks and from people concerned about Critical Race Theory being taught in schools. While the school board insisted it wasn’t in the approved curriculum, school board members received threatening emails, which prompted them to temporarily close their meetings to the public and increase security.