‘Tis the Spirit of Tailgating Season 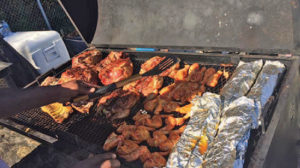 Tailgating is where Southern legacy meets HBCU culture. During GHOE this occurs from sunrise to sunset.

This series of events on Saturday consists of students, Aggie Alumni, family and visitors spread out all over the southside of campus, Murrow Blvd, behind the football stadium, and in the baseball parking lot.

Rest assured, everyone and their mother will be at this year’s tailgate. Tailgating is a fundamental part of HBCU culture but more importantly it has become a part of Southern Legacy.

In the past, celebrities such as actor and A&T Alumnus, Terrance J, have participated in tailgating at N.C. A&T. This year, rumors are that Insecure actor Sarunas J Jackson might attend. Jackson started the rumor on social media.

“I wanna go to a NCAT homecoming! I was so close to going that I feel I owe it to myself to peep,” the actor said in a Twitter post.

The grandparents will be parked with their trucks, tents, and grills giving out free food to all the A&T students. Alumni will be hanging around the Greek plots, reminiscing about their good ole’ college days. There will be vendors selling shirts, sweatshirts, hats, food, and everything else Aggie Pride. In past years, some of the vendors were God is Dope, College Girl the Brand, HBCU Pride, and much more. With Fall at its peak in late October, light jackets and colorful sweaters will be expected. The tailgate will be a fall fashion show.

Tailgating would not be complete without the Greeks BBQing and stepping on their plots.

There is an expression around campus from an unknown source that states: “An HBCU tailgate is a family reunion, a block party, a cookout, a kick back, a fashion show, a festival, a Black power rally, a revival, an oasis, and a physical and spiritual baptism in Blackness.”

What makes this year’s Tailgate extra special is that North Carolina A&T State University is playing Howard University for the homecoming game. The two institutions represent the largest HBCUs in America.