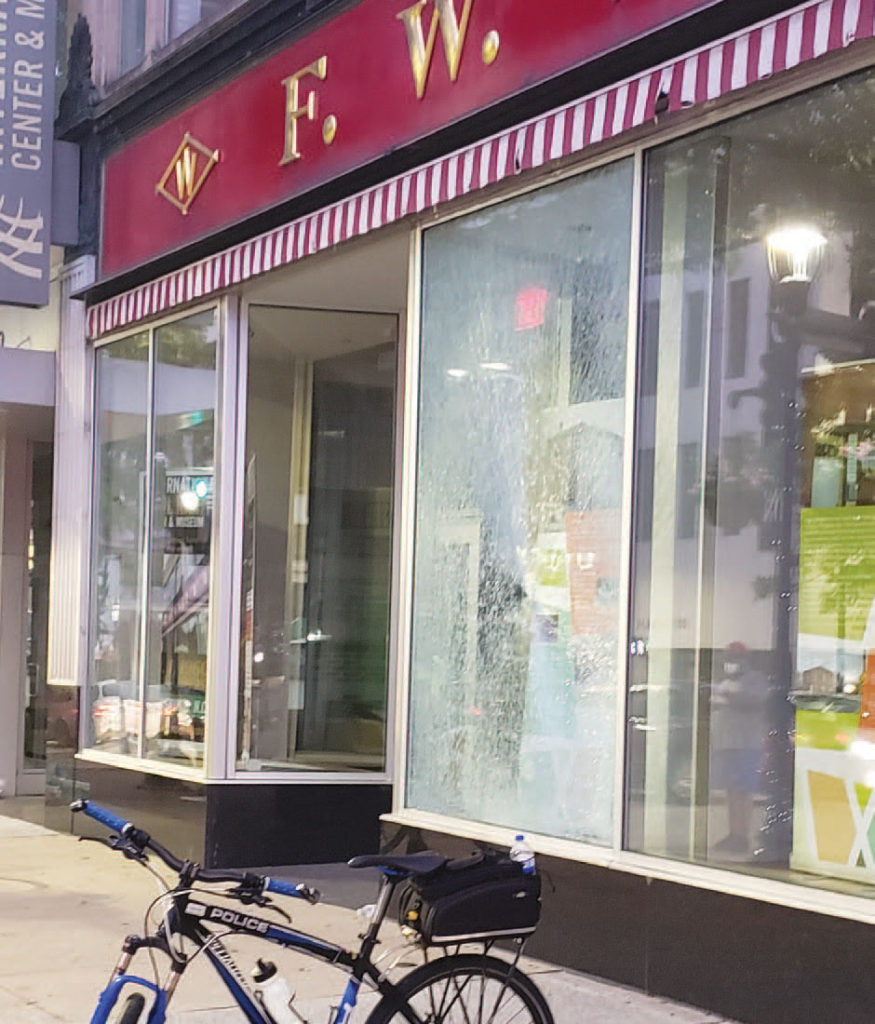 The old F.W. Woolworth building now the home of the International Civil Rights Center and Museum had its front window broken.

On a hot and muggy Saturday afternoon a few people began to make their way to the corner of February 1 and South Elm Streets.

A few more would round the corner. A crowd would cross the street.

Soon it a was clear that a sizeable group of people were in attendance in front of the International Civil Rights Center and Museum in Downtown Greensboro to meet an impromptu call, slowly but surely, to action.

Less than 24 hours before, Anthony “A.J.” Morgan, who goes by the rap moniker Free Dope Major, posted to his social media platforms asking that anyone who felt the anger, hurt and turmoil that he did about Minneapolis, Minn. resident George Floyd’s death at the hands of law enforcement, and the many incidents that came before that, to meet him at the museum.

“Socially we need this as a people. We need to come together,” Morgan said. “We need to understand the power of unity and community and what happens when we come together. I feel like this was a good example of peacefully doing that.”

Not really knowing what to expect, himself, members of Morgan’s family and friends were soon faced with a few hundred people who felt the same way he did.

But the most compelling of all these emotions was eagerness. Eager to act in a peaceful manner to show the city, or whoever was watching or listening really, that they would not continue to just stand aside and continue to watch police shoot and kill unarmed Black and Brown men and women.

Sage Boone was one of those protesters. With a large white sign that not only read “No Justice, No Peace” in black, block lettering but also included names of victims that have died by the gun of police or in police custody, she stood ready to take to the streets.

“I’m here to fight for injustice and fight for what’s right. I feel strongly about this every time an innocent Black person is killed by the police. Police brutality has been way out of hand for way too long,” Boone said. “It has been 400 years of the Black community suffering and I can’t handle it anymore and neither can Black people.”

They did just that, marching throughout downtown Greensboro past the General Greene statue, across the railroad tracks, over the bridge and back to the museum.

Then the group began marching again throughout downtown, past the General Greene statue, across the railroad tracks, down Gate City Boulevard, past the Greensboro Coliseum and onto Interstate 40. Stopping traffic in both directions and resting before heading back to the museum.

Morgan called the protest amazing. This being his first time organizing an event like this he said it was beautiful to have the support from older organizers and the community. He is hoping that people can see the power of unity from the protest.

“Not just Black unity. The problem is that we have advertised our freedom and trying to get out of oppression not to just Black people. It is going to take White people standing on that front line and saying, ‘you know what, enough is enough.’ It’s going to take Asian people, gay people, trans people, all different types of people to come together and say, ‘enough is enough.’ That is what I hope people take from this.”

UNCG student and Winston-Salem native J. Andrew Speas came out with his partner Kemari Bryant to see exactly how the peaceful protest was done. The pair plan to hold their own protest on Sunday, June 7 at 2 p.m. at LeBauer Park.

Speas said that even though he is an observer he is excited to see so many people come out to participate.

“I am happy that despite a pandemic, people understand that if a pandemic doesn’t kill us the police might and understanding that our generations and future generations deserve better. We may not see the change but damnit we are going to fight for it,” he said. “I’ve met some really fantastic folks during this time and I hope that we develop a lasting relationship that expands the conversation beyond just public demonstration but teaching and how to radicalize, organize and how to move forward as a body. Not only that, but to make sure that voting is a part of the conversation. We can walk the streets and we can have the conversations but if we don’t vote then change won’t come because the people who make the laws will still not look like us.”

After sunset, a vastly different group of protesters came to the scene and littered themselves amongst the peaceful ones.

This led to chaos within the city.

Multiple businesses were damaged throughout downtown including the International Civil Rights Center and Museum, the historic Carolina Theatre, Community Theatre of Greensboro, DGI, Art Mongers, The Candy Shop, Dudley Beauty School, Vivid Interiors and more. Damage and looting occurred at Social Status and Mellow Mushroom and an SUV drove through a crowd at the corner of South Elm and Lewis Streets.

In the early hours of Sunday morning, a fire was set ablaze at the Guilford County Courthouse. Greensboro police were forced to pull out riot gear and deploy pepper-spray and tear gas to clear the streets.

Greensboro has seen protests every night since and has been under an 8 p.m. to 6 a.m. curfew since Monday night (June 1).