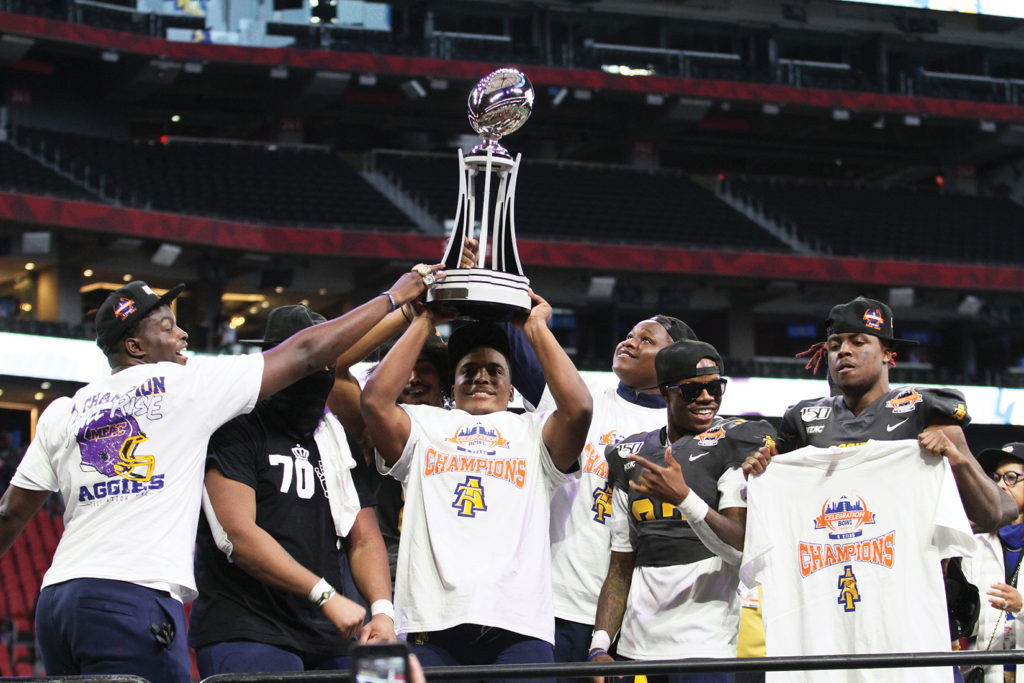 ATLANTA – In what has become an annual pilgrimage to a place known as the Empire State of the South, A&T once again proved to be the most dominant empire in the world of HBCU football.

Matching their highest scoring output of the season, the Aggies raced ahead of Alcorn State before halftime and then overwhelmed the Braves during a frantic third quarter, eventually pulling away for a 64-44 win.

For the Aggies (9-3), it was their third straight Celebration Bowl victory and the fourth overall in the five-year history of the bowl game. It also earned A&T the recognition of being the 2019 HBCU National Champions, putting a wonderful bow on another memorable, yet challenging season.

“We’re humble but hungry,” said A&T’s Sam Washington, who has now won his second consecutive Celebration Bowl as head coach after earning two previous bowl victories as A&T’s defensive coordinator under legendary coach Rod Broadway. “We carried that theme with us throughout the entire season. We wanted to remain humble, and we wanted to stay hungry so that we could reach this pinnacle again.”

An electric crowd of 32,968 inside Atlanta’s Mercedes-Benz Stadium was treated to non-stop offensive fireworks in the second half, as both teams responded with big play after big play, combining for 49 points in the third quarter alone. That would set the Celebration Bowl record for the most points ever scored in one quarter. Fortunately for the Aggies, they were able to score 28 of those points and despite a gallant effort from the Alcorn quarter Felix Harper (341 yards passing, three touchdowns and one interception) and wide receiver Chris Blair (seven catches for 150 yards and one touchdown), the Braves never got closer than 11 points the rest of way.

A&T’s fifth-year senior quarter Kylil Carter, who entered the contest with a somewhat inconsistent resumé, was expected to serve as little more than a game manager against a tough Alcorn defense. Reportedly, some Alcorn players even stated that their game plan was to try to hold him to under 50 yards passing.

Instead, he responded with the best outing of his career, setting Celebration Bowl single-game records in passing yards (364), touchdown passes (6) and total offense (460).
“We watched film on them for a couple of weeks, and we knew that on play-action (the defensive backs) would kind of come down (for run support),” said Carter, who was named the Offensive MVP of the Celebration Bowl. “We thought we could throw over top of them and let our receivers make plays.”

After missing a chance to play in last year’s Celebration Bowl after suffering a broken leg in a car accident, Carter enjoyed what will go down as one of the greatest performances ever by an A&T quarterback.

Afterwards, however, Carter was quick to share the credit to his coaching staff and teammates.

“(Offensive coordinator Chris) Barnette opened it up, I didn’t,” said Carter. “We just went out there and executed whatever plays he called. I tried to make it count, get the ball in the receivers’ hands and give them a chance. They caught the ball and made plays.”

Korey Banks was the Aggies’ leading receiver with six catches for 122 yards and two touchdowns. Elijah Bell only caught two passes on the afternoon, but both resulted in long touchdowns including a 53-yarder in the second quarter to give the Aggies a 7-3 lead.

Zach Leslie caught four catches including a 59-yard touchdown that made the score 14-10, and Ron Hunt added a 43-yard score during the see-saw third period.

A&T running back Jah-Maine Martin was held to just one rushing yard in the first half but exploded for a 75-yard touchdown run on his first carry of the second half and finished with a game-high 110 yards rushing.

Defensively, the Aggies were led by true freshman linebacker Jacob Roberts who recorded six tackles and had a 28-yard interception return.

That big play helped set up a 26-yard Noel Ruiz field goal, giving A&T a 17-10 lead with five minutes left in the second quarter. After forcing a quick three-and out, the Aggies embarked on an eight-play, 64 yard scoring drive that was capped by Carter’s four-yard pass to Banks on a drag route.

That score put A&T ahead 24-10 at the break and after withstanding a back-and-forth third quarter, the Aggies were eventually showered with confetti from the rafters, celebrating yet another title.

“This shows people out there that (our) system works,” Carter said. “If you buy in, you win a championship.”