The Pride roars to first USA South football win since 2015 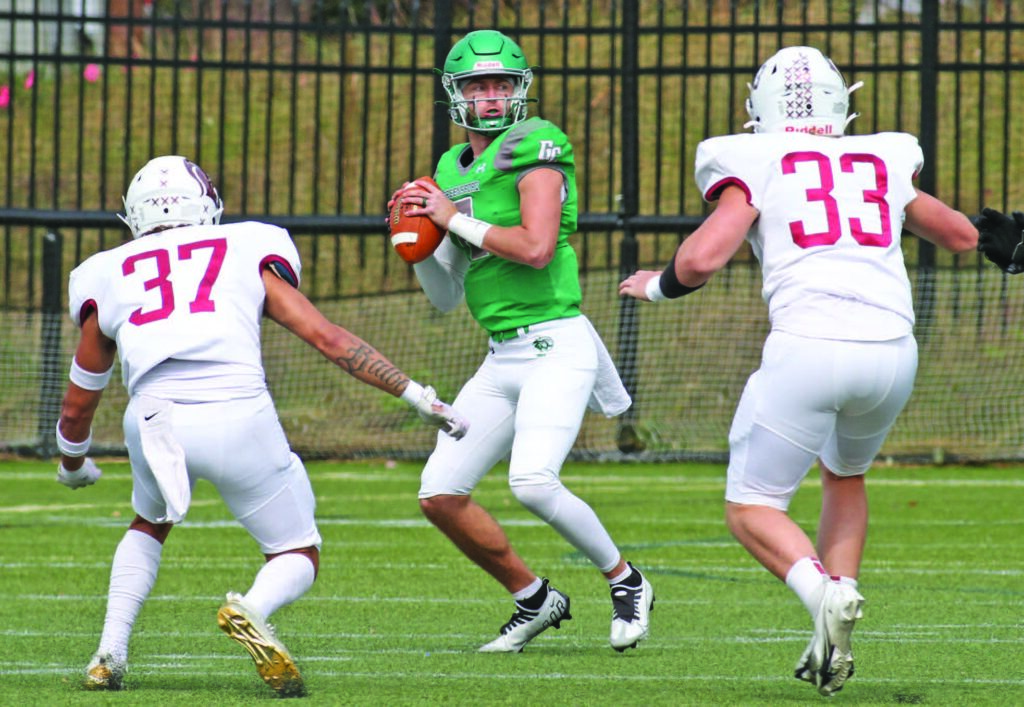 The Greensboro College Football team celebrated with emotion after their first win of the season, following a Saturday afternoon victory over Southern Virginia University on sun drenched Pride Field by a score of 38-28. The Pride used a potent offense which battered the Knight’s defense for 555 yards and created timely turnovers to pick up the conference victory.

Coach Tyler Card must have seen something on film as the first play from scrimmage for the Pride demonstrated, as it only took 12 seconds for the scoreboard to flip. Senior QB David Loughry II would heave a high arcing pass down the left sideline, and the pass would drop into the hands of K.J Greer for a 75-yard strike that would send Pride Field into a frenzy as Greer could not be caught for the score.

Following a Knight punt, which pinned the Pride back to their own 7-yard line, Loughry II would then begin to methodically work his offense downfield with a pair of third down conversions. In the end, he would hit Coy Davis on the slant pattern for a 14- yard strike and a two touchdown lead with 4:39 remaining in the quarter. The Knights would strike back quickly with a long touchdown pass to slice the Pride lead in half as the quarter would come to an end.

A poor punt by the Pride at the end of the first quarter would give the Knights solid field position and they moved the ball toward the tying score. However, a huge interception and return of 40 yards by Derek Smith would thwart the drive and put the Pride in a position to explode to finish the half. And the fireworks flew quickly as the Loughry II to Davis combination clicked again from 25 yards for the score. Marano Collins would continue his success kicking extra points as he would drill his third of the game for the 21-7 advantage with 12:05 remaining in the half.

The Knight’s troubles continued, as a fumble and TD return by Symieon Marsh-Sheridan would stretch the lead to 28-7. The Knights would still be in a giving mood as Tyler Alston would then intercept a pass at the Pride 43-yard line. Coach Card’s crew would then reach into their bag of tricks as a Loughry II would fire a pass behind the line of scrimmage to the versatile Cale Matthews, who would then deliver downfield to the streaking Deaven Hawkins for the 43-yard connection and score. The quick strike and big play defense would stretch the lead to a comfortable 35-7 count at the break.

The third quarter would begin with both the Knights and Pride drives ending with failures to connect on fourth down plays. The Knights would respond quickly with a long run to cut the deficit to 35-14. The Pride would take the ensuing kickoff and put together a time-consuming drive which resulted in a Collins 39-yard field goal making the score 38-14. During the drive Loughry II and Hawkins would continue to play pitch and catch, and Cristian Burgess chipped in with 23 yards on 5 carries. The quarter would end with same margin.

The Pride would have a field goal blocked and the Knights would storm down the field for touchdown and successful two-point conversion to cut the lead to 38-22 with 4:08 remaining in the game. Following a short Pride drive, the Knights would quickly strike again to make the score 38-28. The two-point conversion pass was intercepted. The Pride would then recover the short kickoff and a pair of first downs would seal the victory as the Pride would win the game 38-28.

GC Head Coach Tyler Card had these thoughts on the win: “ I am very proud of our guys finding a way to finish and get our first victory. It was great to get a win on Pride Field and to see the energy on the sidelines. Our guys played their tails off all afternoon. What a great feeling to have our first conference win since 2015. Now we have shown that we know how to win a football game and it is on us to put two halves together each and every time we play.”