The Beloved Community Center hosted its second People’s Town Hall for this election cycle, inviting state and national candidates to listen to community concerns at Presbyterian Church of the Covenant in Greensboro.

“A people’s town hall is where the people get a chance to speak,” said Joyce Johnson with Beloved Community Center. She then opened the floor to the community members who were invited to speak. 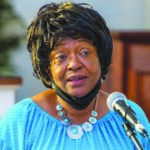 The People’s Town Hall scraps the traditional candidate forum script where candidates simply state their respective platforms and tell voters why they are the best person for a particular position. During this town hall, candidates for state and national offices first listen to comments from community members based on the issue areas chosen by event organizers during previous Get Out the Vote planning meetings. The candidates present were given an opportunity to provide a three-minute response and offer their perspectives on matters raised by the community. At the end, town hall attendees were allowed to ask additional questions to the candidates.

“We want candidates that are going to allocate for funding for reentry programs and expungement opportunities. We also want to look at SNAP benefits and the availability to felons. We all have to eat. How do we pay the criminal debt if we can’t get a job due to criminal history,” said Noble, who shared that she was formerly incarcerated and is now attending N.C. A&T State University working towards a degree in social work. 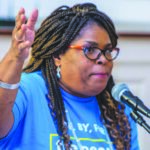 A North Carolina Court ruled in April to give 56,000 people in North Carolina who are ex-felons the right to vote this year. Guilford County has 2,193 people who are on parole, probation, or post-release supervision for a felony conviction, who are now eligible to legally register to vote.
“We’re all going to the ballot box for a reason. Engaging the citizens in civic engagement matters. On the ground, work matters,” said Lissa Harris of Democracy NC.

Bruce Rich, Director of Community Housing Studies at UNCG shared that rental market trends in Greensboro for July and August have doubled since 2020 and Greensboro has the second fastest growing rent since last year. “Rent is going up. How do we grow the supply of affordable housing? That doesn’t necessarily mean public housing, or unsafe housing that people don’t want,” said Rich. “We can’t build sustainable housing policy on a one-time payment of COVID funds relief money. We’re going to have to think bigger, more radical. Can the private market really supply housing needs like it claims it can? It can’t. Do you want eviction to be the only way to allocate scarce housing? Our city needs real investment in permanent housing. Eviction has become part of relocation which is alarming.”

Minister Kenya Hamlin of United Church of Christ discussed debt in all forms from criminal debt, medical debt, Black farmers debt and student loan debt, a topic that U.S. President Joe Biden has been focused on lately. “We are all called to build a just economy for all. The challenges are we are a Christian organization, but we also lift up that God doesn’t want people to die owing. There should not be people dying in debt. We are finding ourselves with predatory debt.” said Hamlin, who added, “Students should not be preyed upon. I want to engage the candidates on what is the new system to educating our next workforce.”

The GOP has been in discussion with the N.C. Department of Revenue about taxing it. N.C. Gov. Roy Cooper has asked the Republicans not to do that. 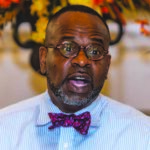 Six candidates participated in the town hall meeting, all of which are Democrats.

Rep. Pricey Harrison, running for a tenth term in the N.C. House, named her priorities as women’s reproductive rights, fair redistricting maps, housing and the environment.

“What we need to do is realize we have the biggest assault on court judicial review. It’s going to get much worse. Everybody needs to vote all the way down the ballot including the judges which is one of the most important races on the ballot,” said Harrison.

District 28 Sen. Gladys Robinson is going for her seventh term in the N.C. Senate.

“As hard as we work, we can’t do anything as the minority. We have to change the people in office who don’t care about these issues. They are funding more private schools, charter schools and decimating our public schools. Medicaid expansion has taken me 10 years to get through the senate,” said Robinson.

Sherrie Young, a Democrat candidate for the N.C. House District 59 seat is running against incumbent Rep. Jon Hardister (Rep). She noted that high on her priority list of issues is Medicaid and housing, specifically for the elderly.

“I serve this community as teacher, so I understand service. Being a judge is the epitome of service. I’m blessed to be in that capacity to impact change. You have to be at the table to make change. I don’t make laws, I enforce them. I try to prevent people from coming back into the system, I do my best to see that justice is served and if there’s an opportunity to help people in that process then that’s good,” he said. 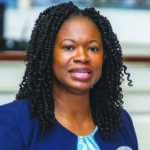 “One of the things that I continue to do is to make sure the court still remains. Children getting in trouble in school shouldn’t be put into the prison pipeline.

I’ve been active in my district. If we don’t show up and vote, bring everyone because when Jan 1 comes it’s too late to ask who the judges are.

Guilford County District Attorney Avery Crump was elected in 2018 and is running for reelection this year. As the current District Attorney, Crump implemented a juvenile justice program that offers juvenile offenders with misdemeanor, nonviolent charges to have their charges dismissed through community service and restitution. She also instituted a program that helps people with minor traffic violations against their driver’s license an opportunity to have the fines waived.

“Judges cannot make change. They are elected to enforce the laws that your legislators make. It was very disheartening to me to have to sentence juveniles for certain offenses, give them a record, give them jail time because they couldn’t afford alternative programs. I believe in the law, but I also believe in second chances,” said Crump. “I also want people properly licensed on the road. We’ve helped over 12,000 people get diving privileges restored in Guilford County. I’m a public servant not a politician.”

Coming up, Oct 3- 7 is voter education week and October 14 is the deadline for voter registration.

The next People’s Town Hall is October 18.