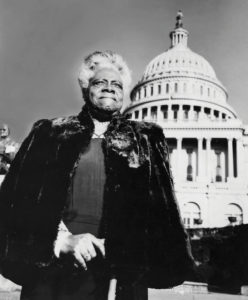 The Life and Work of Dr. Mary McLeod Bethune

Mary McLeod Bethune, the founder of our beloved National Council of Negro Women (NCNW), was born on July 10, 1875 in a small log cabin on a rice and cotton farm near Mayesville, South Carolina. The 15th of 17 children born to Patsy McIntosh McLeod and Sam McLeod, both of whom had been enslaved, she overcame enormous obstacles, and went on to become one of our nation’s most accomplished and celebrated Black women. During her distinguished life of service, Dr. Bethune founded Bethune Cookman College (now Bethune Cookman University); she was a co-founder of the United Negro College Fund (UNCF); she held a leadership position in the Women’s Army Auxiliary Corps; she was appointed a national adviser to President Franklin D. Roosevelt, with whom she worked to create the Federal Council on Negro Affairs that was known as the Black Cabinet; and she was the only African American woman who was officially a part of the United States delegation that created the United Nations charter in 1945.

In recognition of her legendary work as a distinguished educator, the founder, co-founder and leader of a number of civil rights and women’s rights organizations, Dr. Bethune was deemed: “First Lady of Negro America” by Ebony Magazine in July, 1949; she was known by the Black Press as the “Female Booker T. Washington;” and she was known as “The First Lady of The Struggle” because of her commitment to the liberation of Black Americans.

Dr. Bethune was the recipient of numerous honors. Her homes in Daytona Beach, Florida and Washington, D.C. are designated as National Historic Sites, and there is a memorial sculpture of Dr. Bethune in Washington, D.C. In 2018 the Florida Legislature designated Dr. Bethune as the subject of one of Florida’s two statues in the National Statuary Hall Collection. After Dr. Bethune passed on May 18, 1955, columnist Louis E, Martin said, “She gave out faith and hope as if they were pills and she some sort of doctor.”

On December 5, 1935, with the support of the leaders of 28 notable Black women’s organizations, Dr. Mary McLeod Bethune responded to the need to harness the leadership and the power of African American women by founding the National Council of Negro Women (NCNW). Dr. Bethune envisioned an organization of organizations that would improve the conditions of Black women and their families nationally and internationally.

During the 1930’s, as a newly formed organization of Black women, NCNW organized educational programs and launched a number of national efforts. For example, in 1938, the NCNW sponsored a “Conference on Governmental Cooperation in the approach to the Problems of Negro Women and Children.” Following that conference, Dr. Bethune and representatives of NCNW would regularly visit the White House to speak to the need for more Black women administrators in upper-level government positions.

In the decade of the 1940’s, under Dr. Bethune’s leadership, the NCNW continued its activism, including organizing a campaign to desegregate the armed forces. In 1941, NCNW became a member of the U.S. War Department’s Bureau of Public Relations under the Women’s Interest Section. From that membership position, NCNW lobbied to have Black women in the United States Army. By 1942, those efforts were successful as the Women’s Army Corps (WAC) began to accept African American women in the United States Army.

During World War II, NCNW organized efforts to assist women globally. And NCNW advocated for the United States to participate in the United Nations. Dr. Bethune was one of only three African Americans who were present at the official launching of the United Nations.

On this 85th anniversary of the founding of the National Council of Negro Women, we are called to recommit to our work in support of Black women, their families and communities. We must do so in ways that are effective for our time as Dr. Mary McLeod Bethune did so well during her time.