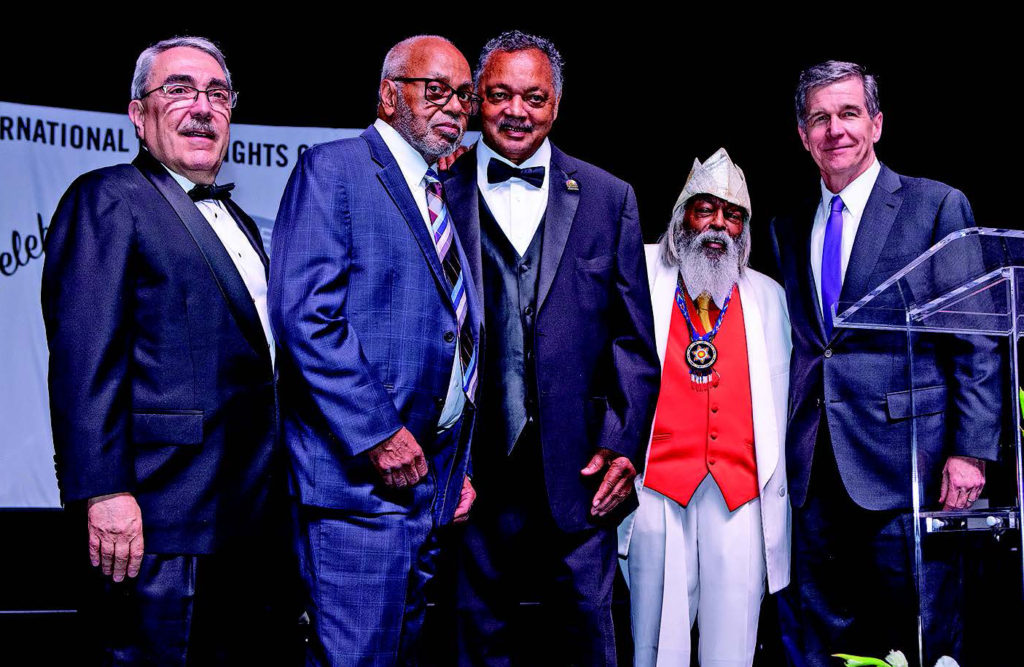 The walls of the Greensboro Coliseum Special Events Center echoed with the sound of more than 1,800 voices belting the words to, “Lift Ev’ry Voice and Sing,” also known as The Negro National Anthem, on Saturday night.

Greensboro’s International Civil Rights Center and Museum hosted its 2020 Annual Fundraising Gala on February 1, marking the 60th anniversary of America’s most recognized lunch-counter sit-in protests against segregated public eating establishments in the South. On that date, four students from N.C. A&T College — Joseph McNeil, Ezell Blair, Jr., (now Jibreel Khazan) and the late David Richmond and the late Franklin McCain — led the charge that would spark a series of sit-in protests to include students from surrounding colleges and high school students during the summer.

Sitting in front of a replica of the original lunch counter at the International Civil Rights Center and Museum, Khazan recalled the night before the first protest and telling his mother about their idea to sit-in at the Woolworth lunch counter in downtown Greensboro.

“She said you better sit down and think twice. Do you realize what you are talking about? You guys start something and some people may get hurt and may even get killed,” said Khazan.

Both he and surviving A&T Four member Maj. General Joseph McNeil said although they knew the risk, it was something they all believed they needed to do.

“In four days over 1,000 students converged on this city. We had to learn how to do the right thing when we came down here. We had to learn non-violence. This community experienced an outpour of people from all walks of life,” said McNeil.

Museum leaders say this year’s gala attracted its largest crowd to date, where attendees enjoyed a sumptuous dinner, musical performances, and the annual awards presentation. Barack Obama, 44th President of the United States, was bestowed with the Alston/Jones International Civil and Human Rights Award. Obama was not in attendance for Saturday’s gala, but he tweeted that morning.

“Sixty years ago today, the Greensboro Four stood up to injustice by sitting down at a lunch counter. Our journey is full of such stories; of acts of patriotic protest that challenge this country we love to live up to our highest ideals, however long it takes. #BlackHistoryMonth.” U.S. Rep. G.K. Butterfield, N.C. Congressional District 1, accepted the award on Obama’s behalf and also presented the museum with a Congressional proclamation recognizing the 60th anniversary of the sit-ins.

“I finished high school in 1965 in Wilson, NC. Back then, we got our thirst for change and our will for leadership from the A&T Four. This event did not happen in isolation. There was a growing movement that was taking place all across the South,” said Rep. Butterfield.

The A&T Four’s actions would also become the impetus behind the creation of the Student Non-Violent Coordinating Committee (SNCC).

The Rev. Al Sharpton, founder and president of the National Action Network, was honored for his continued work on behalf of civil rights and human equality with the Lifetime Achievement Award. Sharpton became an ordained minister in the Pentecostal church at the age of 10 and at only 13 years old, he was appointed to Youth Director of New York’s SCLC Operation Breadbasket by the Rev. Jesse Jackson. He would go on to serve as the Director of the Ministers Division of the National Rainbow PUSH Coalition under Rev. Jackson. Sharpton was unable to attend the gala, but Rev. Jackson was on hand to accept the honor on his behalf.

Bennett College alumna, Dr. Linda B. Brown and Emma Washington were honored as the 2020 Sit-In Participant Award honorees, for their involvement in the F.W. Woolworth 1960 lunch counter non-violent direct action. Dr. Brown is the retired Willa B. Player Professor of African American Literature and Humanities at Bennett College. She is the author of seven published books, three novels, numerous poems and essays, with two of her books of non-fiction depicting life at Bennett College and the sit-ins.

Washington earned a degree in mathematics and biology from Bennett, and went on to have a 26-year career as an educator in the Mecklenburg County School System. She later earned a master’s degree in biology and mathematics from the University of Chicago and taught at St. Augustine’s College (now University). Clayola Brown, a union leader and labor activist, was the recipient of the Unsung Hero award.

Brown has served as the first female president of the A. Philip Randolph Institute since 2004, the oldest constituency group of the American Federation of Labor-Congress of Industrial Organizations (AFL-CIO). Her lifelong commitment to labor activism began when she was a teenager in the early 1960s, in her hometown of Charleston, South Carolina. She and her mother were part of a successful effort to organize the Manhattan Shirt Factory in Charleston.

“This museum is a symbol of our history. It’s amazing to see what tenacity can do. I’m sitting next to real heroes tonight. Because they sat, we can stand,” said Brown.

Rev. Dr. Cardes H. Brown, Jr., president of the NAACP Greensboro Branch, and Religious Chairperson of the N.C. State NAACP received the Lifetime Community Service Award. In addition to being a leader in the Greensboro Pulpit Forum of Clergy, Brown has dedicated more than 50 years of his life to pastoral ministry and fighting against social injustice. He is currently pastor of the New Light Missionary Baptist Church in Greensboro where he has served for more than for 43 years.

Longtime actor and activist Danny Glover was the recipient of the museum’s Trailblazer Award. Although most famously know for his roles in “The Color Purple,” and the popular “Lethal Weapon” series, Glover attended San Francisco State University in the late 1960s, where he played a role in the 1968 student strike, leading to the creation of the first ethnic studies department in the country.

Glover noted how the Greensboro sit-ins touched his life all the way in California. He recounted reading the newspaper articles about the lunch counter protests as he delivered the San Francisco Chronicle as a 14 year-old paper boy.

“My house was alive in that point in time,” said Glover, whose parents were active members in their local NAACP, as well as the postal workers labor union. “Those four young men were my generation’s heroes.” N.C. Gov. Roy Cooper delivered a state proclamation recognizing the 60th anniversary.

“I pictured the Greensboro Four and I wondered how they figured out a sit-in would be so effective. Something so simple for me to do, meant so much to others,” said Cooper.

This year’s gala also celebrated the 10th anniversary of the museum’s opening with the theme, “The Movement Continues,” which museum co-founder and Guilford County District 8 Commissioner Melvin “Skip” Alston said was about celebrating how far we’ve come and acknowledging how far we still have to go.

“When you look at what they did and where we are now, positive changes have been made. But we also know that a lot hasn’t changed and that the movement continues. This is a celebration of a non-violent struggle that took place 60 years ago right here in Greensboro, NC. We should be proud that we made that mark on history. Now we need to rededicate ourselves to bringing about freedom, justice and equality for all people,” said Alston.