Special to the Carolina Peacemaker / November 8, 2019 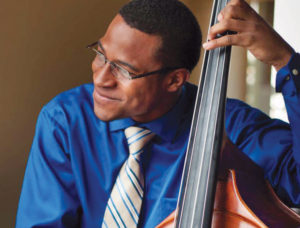 Sharing the stage will be the acclaimed double bassist, Xavier Foley, performing Bottesini’s Concerto No. 2 for double bass and orchestra. This will be preceded by Respighi’s Gliuccelli (The Birds) for orchestra, and followed by Shubert’s Symphony No. 4.

Xavier Foley, called a “standout performer” by the Philadelphia Inquirer, graduated from the Curtis Institute of Music in 2016 where he studied both composition and performance with Edgar Meyer and Hal Robinson. Among many distinctions, Foley was the winner of the 2014 Sphinx Competition and 2011 Senior Division International Society Bassist Competition. As such, he has appeared as soloist on numerous stages, including with the Atlanta Symphony, Sphinx Symphony Orchestra, Philadelphia Orchestra, and the Nashville Symphony. Foley made his Carnegie Hall solo debut with the Sphinx Virtuosi, with which he was also soloist on East and West coast tours. He also performed in Carnegie Hall as principal bass of the New York String Seminar Orchestra.
Foley will be performing Bottesini’s impressive Concerto No. 2 for double bass and orchestra. Fittingly, Bottesini was known as “the Paganini of the double bass” and was famous for an impressive control of his massive instrument. As a result, his second concerto for double bass and orchestra stands as one of the most studied and performed pieces in the bass repertoire.

The concert will open with Respighi’s beloved Gli uccelli (The Birds). This suite was written in 1928 in an attempt to imitate the various sounds of birds including transcriptions of birdsongs, fluttering wings, and scratching feet. The evening will conclude with Schubert’s Symphony No. 4, completed in 1816, when the composer was only 19 years old.

With Xavier Foley’s solo performances described as “unforgettable” and “wrenching” this is not a concert to miss. Join the GSO on November 21 or 23 for Italian Inspirations.
Tickets at: greensborosymphony.org / ticketmaster.com / GSO Box Office: (336) 335-5456 x224