Tar Heels’ Black Alumni go all out at Final Four 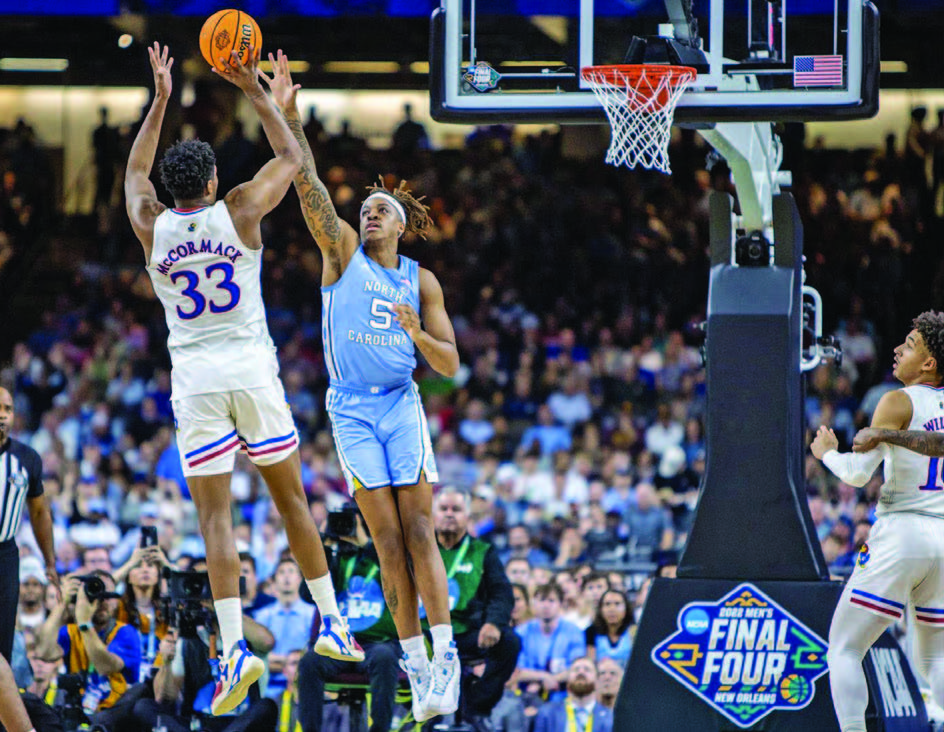 Armando Bacot (#5) led Carolina with 15 points and 15 rebounds for his 31st double-double of the season. Photo curtesy Maggie Hobson.

Three out of four ain’t bad.

Among the throngs of fans, a close-knit group of Carolina Black Alumni were in the Big Easy, meeting up for some of the weekend’s events. 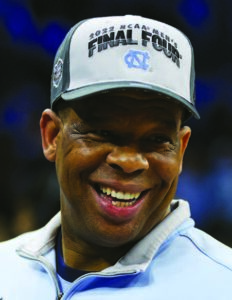 Hubert Davis, coach and an alum of UNC.

Others in attendance connected on Facebook, wishing good luck to Davis and the No. 8 seed Tar Heels, who nearly did the unthinkable before falling 72-69 to No. 1 seed Kansas in the National Championship game.

After the historic Final Four victory over Duke on Saturday night, several of the alumni were treated to a special event at Soule Café for food and cigar smoking.

Then on Sunday, the group gathered at the New Orleans home of Michelle Thomas for a crawfish broil, complete with corn on the cob and potatoes, and a Spades tournament.

Thomas (UNC class of ’93) who enrolled the same year as Davis, helped organize the events at Soule Café and at her home.

“I am a proud alumnus of UNC, so being in New Orleans where I live and hosting the Black alumni has been such an amazing experience for me,” Thomas said.

While at UNC in the 90s, Thomas was president of the Black Student Union in 1992 and 1993 and was mentored by the legendary Dr. Sonja H. Stone, namesake for the Black Culture & History Center at UNC.

“I have not seen many of my friends for 29 years, since I graduated. And to be able to fellowship and celebrate the amazing job that Hubert Davis has done in his first year as head coach has been such a delight,” Thomas added. “It’s been so amazing to fellowship with those Black alumni. Those bonds withstand all time.”

Dr. Tawana Feimster, a Statesville native who now lives in Boston where she is studying at Harvard, also made the trip.

“I am here to celebrate our Final Four win,” Feimster said, referencing the victory over Duke. “We’re here to support Hubert Davis all the way. The most important thing with Hubert is making sure there is equality and equity, with him being the coach, and it’s important for us to support that and to make sure that going forward, he understands that he has our support, and we will fight for him to have the equity as coach.”

The group gathered at the New Orleans Sheraton for pep rallies before the Tar Heels played on Saturday and Monday nights. They gathered for a huge hotel rally at the Sheraton after the victory over Duke and even greeted the team at the hotel after Monday night’s loss.

Also, during the long weekend, the alumni toured the French Quarter, attended the Final Four Fan Fest at New Orleans’ Morial Convention Center and dined at many of New Orleans restaurants.
Chip Tillman, class of 86, said: “I love being a Tar Heel, and I love coming back to support my school and to support Coach Hubert Davis.”

“We are so proud of Hubert,” Tillman added. “I remember seeing him as a player. To see him grow into a man and as a leader of this team, I am so proud. May God continue to bless you Hubert in all your endeavors. Keep it going.”

Veronica Clemons (’92), a native of Maiden, North Carolina, who now works in public relations in Charlotte, was the glue that held some of the weekend’s events together, communicating via group texts and about gatherings and keeping track of the group’s movements.

“This is an extension of what we do in Charlotte all the time in supporting the Tar Heels,” Clemons said. “Charlotte Black Alumni get together for football and basketball games and to give back to our community.

“So, I felt like it was important to get together, no matter where we were from, for this historic weekend in support of Hubert Davis and to support our team.

“And it’s been an epic weekend, where we have had fellowship with Carolina alums, where we’ve made sure people got here, had tickets. It’s historic, and we’re so happy to be here.”
Perhaps, Rochelle Riley, class of 81, summed up the weekend best with a post on Facebook.

“As I was leaving the hotel, a friendly custodian said, ‘Sorry about your loss.’

“I said, ‘No condolences, please. A first-year Coach of the Year took a team no one expected to make it to the Championship Game – and we beat Duke!’ I’m leaving the Big Easy, a big winner. Congrats to Hubert Davis and UNC Basketball!”