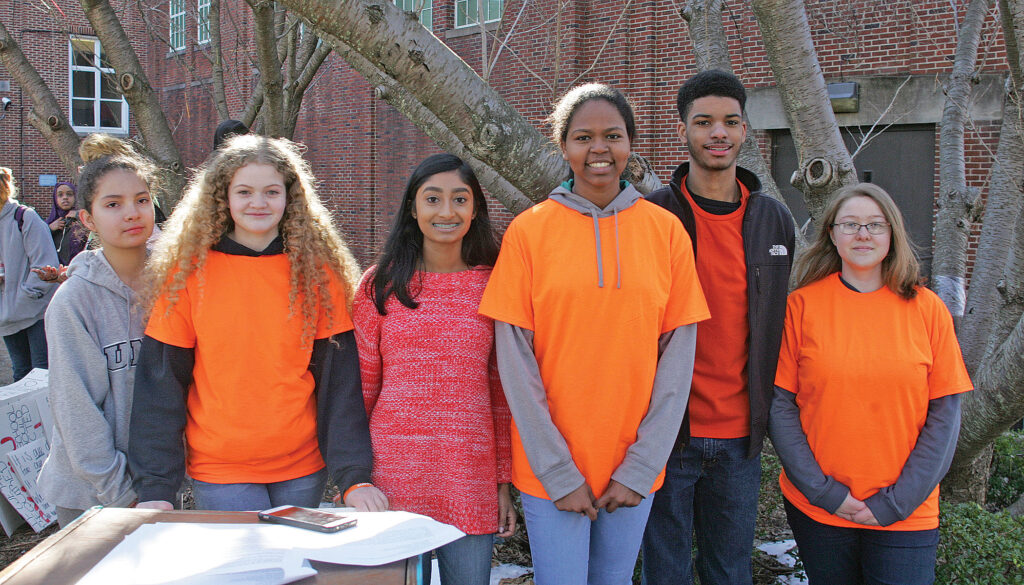 Nearly 200 Grimsley High School students participated in a walkout on the morning of March 14.

One month to the day of the Marjory Stoneman Douglas High School shooting in Parkland, Fla., thousands of schools across the U.S. participated in a nationwide school walkout. Students gathered for 17 minutes, in remembrance of the 17 students and faculty murdered at the high school on February 14.

“We’re here to stand in solidarity with Marjory Stoneman Douglas High School, the survivors of the shooting and with all the supporters in the nation,” said student organizer Omnia Hassan, a junior at Grimsley.

“Us as teens are standing up for something that is really important to us, so I believe that is impactful. We hope that our Congress makes a change so that all students are safe in their schools,” she said.

School administrators allowed the students to gather in the high school’s central courtyard, where they held signs and chanted, “Fear Has No Place in Schools,” and “Enough is Enough.”

High school junior and organizer, Darrien Kenner, noted that the planned walkout was also to encourage more students to speak up about what they believe in.

“We wanted to create an opportunity to allow more students to speak out. And they came out and showed a lot of heart and compassion,” said Kenner.

The idea of a national walkout originated with Women’s March Youth EMPOWER, the youth branch of the National Women’s March Network. While the group led the charge, more than 2,800 demonstrations in all 50 states were expected, according to the organization’s Web site.

In addition to Grimsley: Dudley, Page, Western Guilford, and Northern Guilford High Schools participated in a walkout, along with Kiser, Joyner and Camden Elementary Schools, where the parents helped lead the walkout.

EMPOWER’s list of demands to Congress include: banning assault weapons, requiring universal background checks before gun sales, and passing a gun violence restraining order law that would allow courts to disarm people who display warning signs of violent behavior. They also list policies that they oppose such as conceal carry laws that allow for guns to be carried across state lines, and any legislation that would aim to put more guns in schools.

While other school districts threatened disciplinary actions against students who participated in the walkout, Guilford County Schools’ (GCS) leadership put their support behind the students, allowing people to participate if they chose to.

“I’m very proud of our students and how they handled themselves today. I’m also very proud of educators, who are preparing our students to live and lead in our great democracy, where active engagement is our shared civic responsibility,” said GCS Superintendent Dr. Sharon Contreras.

Dr. John Carlos Miller, Grimsley High School principal, told students, “You have an obligation to yourselves and to your fellow students because you are the young people who will make a difference.”

Dr. Miller went on to applaud the students for exercising their First Amendment rights.

“I believe what we saw today was democracy at its best, students exercising their First Amendment right to address the issues that are significant to their lives. And of course we want them to feel comfortable in doing that, and know they have the support of the adults who are charged with educating them, because this was also a teaching and learning experience for us as educators.”
GCS students also received support from organizations like the North Carolina NAACP, who sent out words of encouragement to students.

N.C. NAACP President, Rev. Dr. T. Anthony Spearman reminded students that the youth have always been on the front lines of change, and to continue their resistance at the ballot box.

“Today, the youth embodies the spirit of resistance that served as the drum beat for justice that guided SNCC leaders and other revolutionaries that have come before them,” said Spearman. “The North Carolina NAACP stands in solidarity with these students as they exercise their constitutional rights. These students are sending a loud and clear message to the administration in the oval office; that they will no longer be silent and will continue [to fight] for the protections they rightfully deserve.”

Students are following up the walkout with a nationwide, student-led march called “March For Our Lives” on March 24 to pressure Congress to pass stricter gun laws. The march in Greensboro will begin at Governmental Plaza at 2 p.m. and end at LeBauer Park.