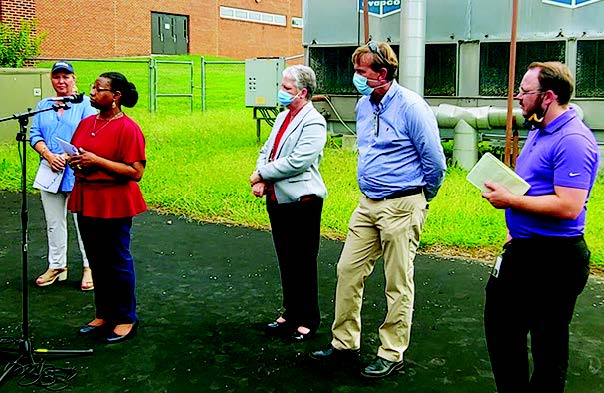 GCS leaders addressed concerns they have been getting from the community at a press conference on August 31at Grimsley High School, one of the schools experiencing cooling problems. With temperatures well into the 90s, a typical classroom can reach 85 degrees quickly, causing concern for the well-being of students, staff and faculty.

“It’s one of dozens of schools across our district that has experienced serious HVAC issues as they returned to school. That is nothing new. It always happens this time of year,” said Winston McGregor, GCS school board vice chair.

The average age of a Guilford County School is 55 years old, with many HVAC systems long past their life span, operating on parts that are no longer in production. GCS leaders cite a global HVAC part supply delay/shortage and a high demand for contractors right now as contributing factors as to how fast these repairs can be made. There are currently nine contractors on the GCS maintenance roster, and they have reached out to 17 more.

The district relies on funding from the state legislature and the Guilford County Commissioners, combined with any education grants for which they qualify. The school district has about $2 billion dollars in deferred maintenance, according to a Facilities Maintenance Study released in 2018. GCS will use the $300 million school bond referendum approved in the 2020 Elections to completely replace nine schools. GCS received about $4 million from the county capital budget, well under the $10 million that was requested. 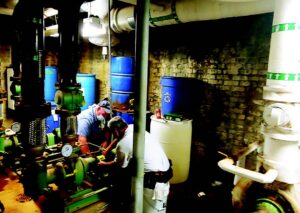 “That $300 million is a fraction of the $2 billion that is needed to replace and build schools. Most of the schools in our district have an unsatisfactory school [rating] in our facilities study,” said McGregor. “We are in this situation here in Guilford County because of years of deferred maintenance caused by chronic under-funding.”

Last year, GCS completed 29 HVAC capital improvement projects. While state laws limit the way the district receives and allocates money, McGregor noted that the school board will have to redirect federal funds that were for learning programs to replace chillers in at least 25 schools.

While not all schools need a full HVAC system replacement, the average middle school’s HVAC system would cost $7 million to $10 million to replace, according to Angie Henry, GCS Chief Financial Officer.

Members of the Guilford County School Board say that emergency maintenance issues like this are forcing them to make tough choices, like replacing an expensive HVAC system in a school they need to replace entirely.

“There’s false and misleading information about what kind of funding can actually be used to repair schools. The law is strict on how we use our funding. The state doesn’t allow us to use transportation funding to go fix our schools, even if we have open bus driver positions. The state doesn’t allow us to use funding from teacher positions we haven’t filled to go fix an HVAC unit either,” said McGregor.

The school board vice-chair said she believes that it could take at least another decade to fix all the deferred maintenance in the schools. It will also take community participation, combined with public and private dollars to fully address the problems in aging schools.

In August, the school district received about 1000 work orders at more than 40 schools. Michelle Reed, GCS Chief Operating Officer noted that 700 HVAC work orders have been completed, which can include whole schools or single rooms. She explained that work orders can get tricky when only certain parts of a school is experiencing cooling problems, because it makes the issue harder to diagnose.

“Work order timeframes are different. Some are an easy fix, where we can just restart the chiller and bring the temperature back up; where some require parts that we have long lead items on.

Dudley advances to 3-A regional semifinals

Did GOP mapmakers try to eliminate strength of Black voters?

Students and teachers enjoy a Thanksgiving lunch with Superintendent Contreras