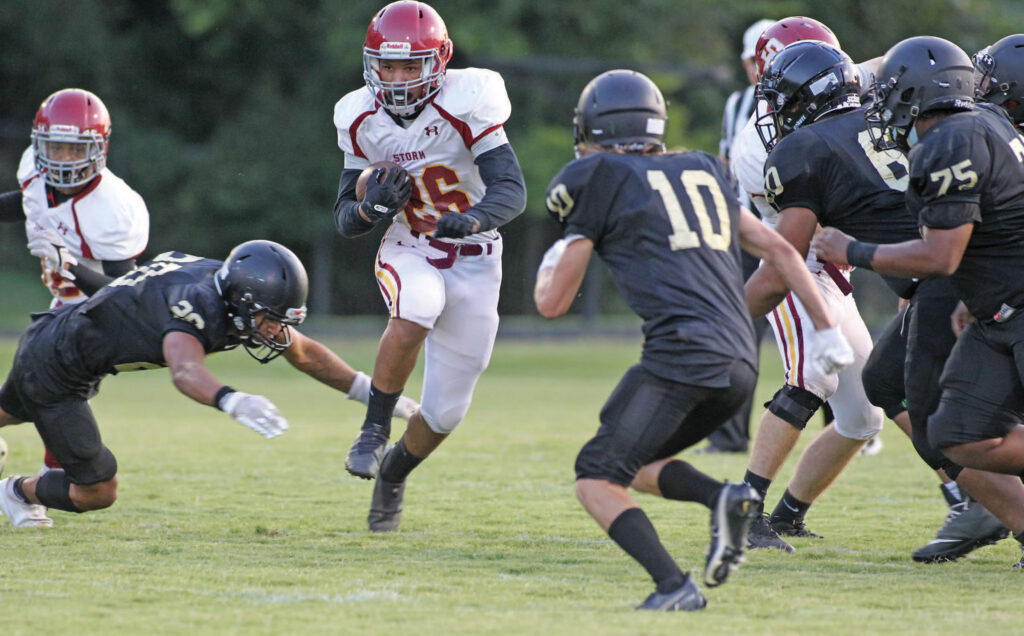 Southern Guilford Storm running back Rydell Herbin scores a touchdown. Herbin tal-
lied a total of 3 touchdowns and one two-point conversion in the Storms’ win over the Hornets. Photo by Joe Daniels.

The Hornets of Western Guilford played host to the Storm of Southern Guilford in a non- conference football game Friday night at Doug Henderson Stadium. Trailing 13-6, at the half the Storm scored twenty-four unanswered points to post a 30-13 victory.

The Storm took the opening kickoff and marched 76-yards, in 15 plays, capped off by junior running back Rydell Herbin’s three-yard touchdown run. The PAT was blocked. Late in the quarter, a bad snap sailed over the punter’s head with the Hornets recovering at the Storm 14- yard line.

On a fourth down and 16 QB Zack Kashubara connected with senior receiver Isaiah Williams tying the score at six all. The PAT fail. Midway through the second quarter linebacker Bryson Moore picked off Southern’s QB Jamias Ferere’spass and returned it 60- yards. The PAT gave the Hornets a 13-6 lead at the break. Unfortunately, for the Hornets there were two more quarters. They never cross midfield in the second half.

The Storm offensive led by junior running back Herbin posted two second half touchdowns, and one two-point conversion, and Herbin scored 20 of his team’s 30 points. Junior wide receiver Jaylin White had a touchdown and two-point conversion ending the Storm scoring. Both teams had frequent penalties such as holding, blocking in the back, offside, delay of game. Things, both teams will have to clean up.