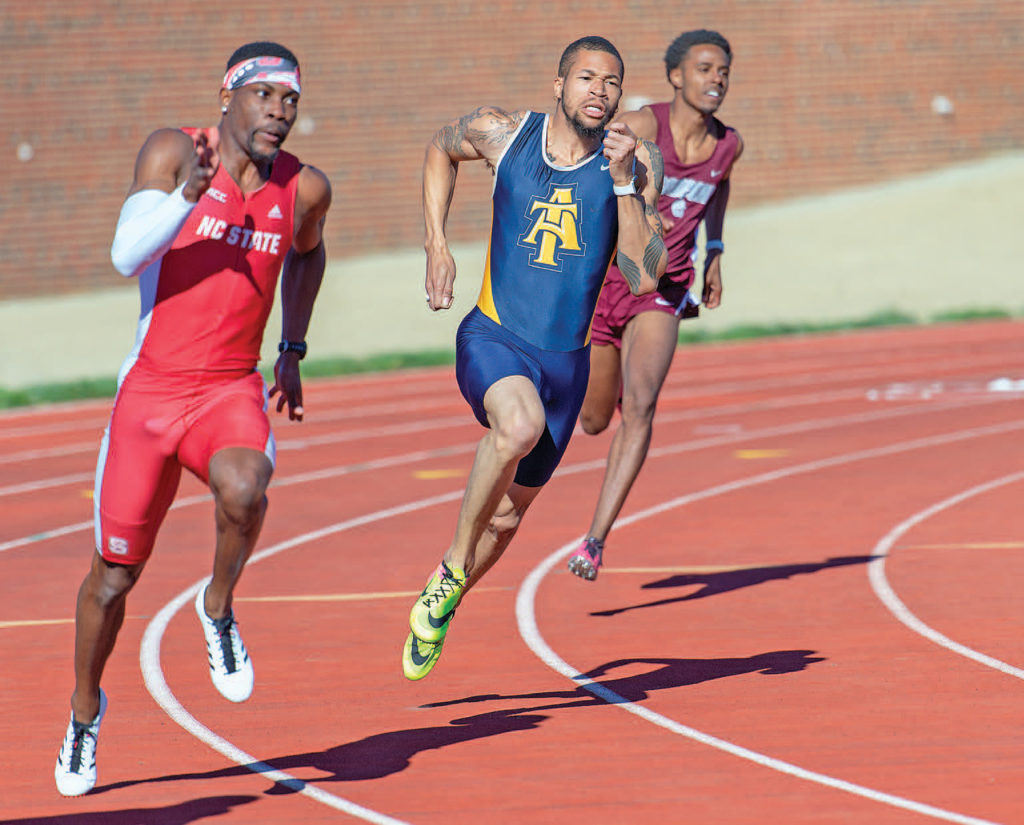 Stewart finished the 400 in 44.54 for a new school record. Quincy Hall of South Carolina holds the fastest time at 44.53 seconds. Stewart won the 400 at the LSU Alumni Gold by outlasting unattached Vernon Norwood who finished in 45.29. Stewart lowered his 400 time considerably after running a 45.18 at the Florida Relays three weeks ago. Senior Justin Hamilton finished 13th in the event.

Stewart was not amazing by himself on Saturday. Freshman Cambrea Sturgis continues to have Aggie Nation excited about what her future looks like. Sturgis won the 200 meters in 22.71. It is the second-fastest time in the world this year. Only Ohio State’s Anavia Battle is faster with a 22.54 she recorded in late March. 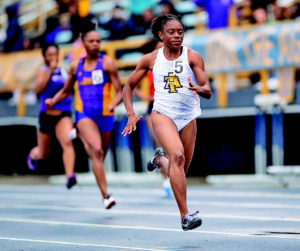 Cambrea Sturgis, a freshman NCA&T sprinter, ran the second fastest 200-meter time in the world with a time of 22.71 seconds. Photo by Kevin Dorsey/Carolina Peacemaker

On Saturday, senior Kayla White, the 2019 NCAA Women’s Indoor Track Athlete of the Year, finished second behind Sturgis with a time of 22.74. White owns the third-fastest time in the world.

Sturgis, White, freshman Kamaya Debose-Epps and junior Taliyah Townsend teamed up to finish third in the women’s 4×100-meter relay with a school-record time of 43.91. N.C. A&T’s director of track and field programs, Duane Ross said the foursome broke the school mark despite having a bad exchange during the race. The 4×100 team moves into 16th place nationally with their performance.

Debose-Epps, the reigning Mid-Eastern Athletic Conference (MEAC) women’s track athlete of the week, won the women’s 100 meters B section with a time of 11.64. Junior Taliyah Townsend finished second in the same race at 11.74.

In the men’s 4×100, the Aggies’ team of junior Akeem Sirleaf, Stewart and seniors Michael Dickson and Rodney Rowe crossed the finish line in 39.14 to finish fourth. Rowe also had a top-five finish in the men’s 200m by finishing in 20.68. Sirleaf was eighth in 20.83.

On the middle distance side, freshman Regan Kimtai finished second in the men’s 800m in 1:51.25. Meanwhile, Dickson had a sixth-place finish in the 110-meter hurdles with a time of 13.70.

On the wmen’s side in the 100mh, junior TeJyrica Robinson ran a personal-best 13.24 to finish fifth. Junior Madeleine Akobundu placed 14th. The Aggies have the top four 100mh in the conference with Akobundu, Robinson, White and freshman Paula Salmon.

The Aggies final tune-up before the 2019 MEAC Outdoor Track and Field Championships to be held at N.C. A&T’s Irwin Belk Track will be the Tom Jones Invitational hosted by the University of Florida on Saturday, April 27.