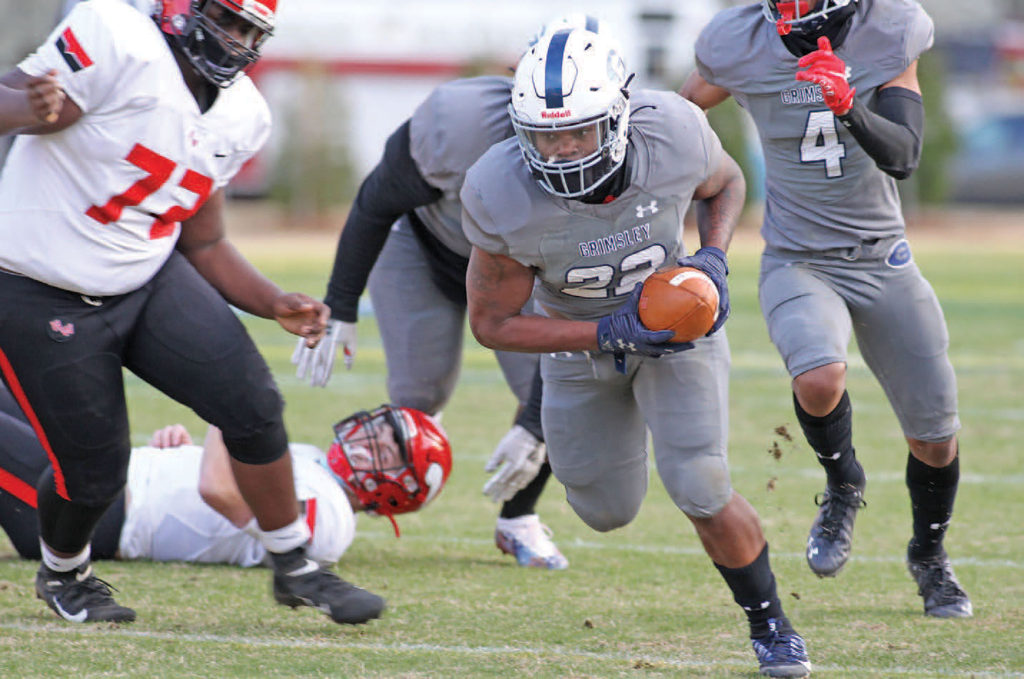 Grimsley’s highly anticipated matchup against Northwest Guilford last weekend was expected to be a showdown between the irresistible force of the Whirlies’ high-scoring offense vs. the Vikings’ seemingly immovable defense.

Instead, special teams proved to be the deciding factor, as Grimsley capitalized on several key Viking miscues in the kicking game to pull away early and cruise to a 48-12 home victory at Jamieson Stadium on March 20.

Northwest Guilford had a blocked punt returned for a touchdown in the first quarter, saw a punt travel just 16 yards to set up another Grimsley score, and later had a kick sail wide left on an extra point attempt.

Probably the biggest special teams blow came on a fake punt by the Whirlies on their second drive of the game, when quarterback Alonza Barnett III took the snap at midfield on 4th and 7 and found Jordan Watkins open down the seam for a 30-yard completion. That would result in points on the following play when Barnett scrambled to his right and located Tyson Resper in the back of the end zone for a 19-yard touchdown.

Later in the quarter, junior defensive end Tamorye Thompson recorded a pair of Grimsley touchdowns in a span of 20 seconds when he returned a blocked punt 30 yards and then, on the ensuing Vikings possession, he picked up a fumble by Northwest quarterback Micah Salmon and found his way back into the end zone after a 28-yard scamper.
Those back-to-back plays put the Whirlies ahead 20-0 and they never looked back.

“We got off to a slow start tonight and I thought special teams kind of got us going,” said Grimsley head coach Darryl Brown whose team improved to 4-0 overall and 2-0 in Metro 4-A conference play. “The fake punt and then the blocked punt that led to a touchdown. Once we got rolling a little bit, I thought our guys made a lot of big-time plays.”

Brown said he recognized something on film earlier in the week that made him confident the fake punt would work against the Vikings.

And while Grimsley managed to cash in on its good fortune all evening, Northwest Guilford (3-1 overall, 1-1 in Metro 4-A) saw similar scoring opportunities slip through its grasp.

After recovering an errant snap on Grimsley’s first punt of the game, Northwest started their opening drive at the Whirlies’ 10-yard line. Yet on 4th and goal from the three, Salmon had his pass tipped at the line of scrimmage and intercepted by Grimsley’s 5-star defensive end Travis Saw.

All totaled, Northwest Guilford would commit four turnovers in the first half alone – including another Salmon interception in the end zone right before halftime – a stat line almost impossible to overcome when facing a team as talented as Grimsley.

The Vikings entered the contest having surrendered just 6.0 points per game in their first three outings; blowout wins over Western Guilford, Smith and Page. However, the combination of bad field position and Grimsley’s explosive array of playmakers caused the normally stout Vikings defense to gradually wear down.

“We started off slow but what people should take away from this game is that we are a complete team and we were clicking on all three cylinders tonight,” said Barnett, who finished with three touchdowns and completed 14 of 21 passes for 125 yards. “Tamorye Thompson came through with two clutch defensive touchdowns. Travis Shaw – we fumbled the ball on a punt and then he gets in the interception. So it was really a great team effort and I’m just glad those guys were able to pick us up when the offense was slow in the first half.”

Barnett, a 6’0, 190-pound junior who is currently being recruited by several Division One schools, showed great command of the offense all night and was especially dangerous when the play broke down.

His most impressive highlight came midway in the second quarter when he avoided two tackles in the backfield, rolled out to his left and through a perfect spiral across his body to senior wide out Christian Tutuh for a 7-yard touchdown.

“He is a very composed young man,” said Brown about his starting quarterback. “Has great vision. Has great feel in the pocket and understands where the pressure is coming from. He had another really good game tonight even though we didn’t have many long drives because we got the ball with a short field at times.”

Brown said as good as his team has played during their 4-0 start; the Whirlies still have a lot of room for improvement.

Grimsley has a bye this week before returning to action on April 2 to face Ragsdale.

“There are times throughout the game where we kind of lose focus and maybe we don’t finish a drive or quarter like I’d wish we would,” said Brown. “So I want to see us get better at that, and I believe that starts at practice.”