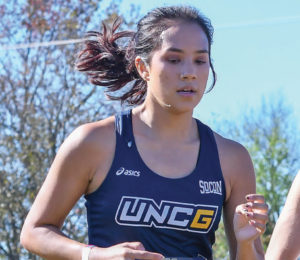 MACON, GA – It was prime conditions for the 91st running of the SoCon Cross Country Championships Saturday, with the Spartans competing alongside the other nine members of the Southern Conference in the men’s 8K and women’s 5K. Both the UNCG men and women were able to grab fourth-place finishes as a team, with Furman securing its eighth consecutive title on both sides.

With the men opening competition at 10 a.m., junior Dylan Christopher was the first to cross the finish line for UNCG, running a 25:53.10. Christopher’s pace was good enough for a 10th-place finish among the field, while only three other teams had athletes outpace the Spartan runner.

Newcomers led the way for the Spartan women, with freshman Jenna Reiter providing a team best 18:54.08 5K, that earned the first-year SoCon All-Freshman honors. Crossing the finish line in 17th overall, Reiter came in just two spots ahead of junior transfer Jillian Felton, whose 18:59.95 was just a few seconds off her teammates’ pace. Senior Ariana Garcia added 27 points for the Spartans with a 19:34.65 in her final SoCon Cross Country Championships, while Malea Smith and Chandler McCaslin came in among UNCG’s top-five finishers.

“We had great individual performances on both sides, including freshman Jenna Reiter and transfer Jillian Felton for the women,” said Pearson. “We’re glad to have them join us this season. On the men’s side, Dylan Christopher earned his first all-conference selection and Alex Roy really performed for us today and just missed all-conference by one spot. These athletes provided some low-point performances today, which is always needed at championship races.”

As a team, the Spartan men and women scored 114 and 140 points respectively, with the men’s squad coming within a dozen points of third-place finishers ETSU (102).