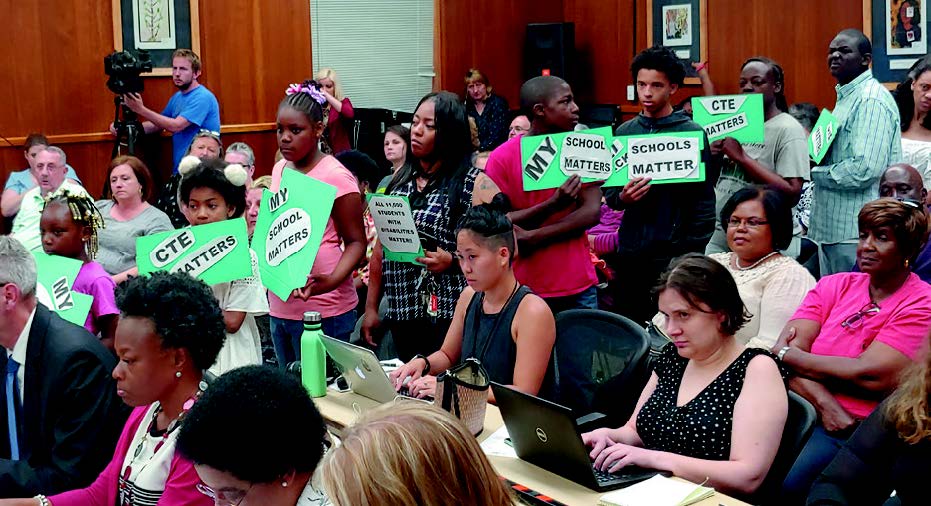 The Guilford County Board of Education approved funds in the proposed budget to pay for repairs at Gateway Education Center.

The board voted 7 to 2 at it’s meeting on April 30 to request that Guilford County Commissioners reallocate $1.9 million of $7 million in bond money to fund CTE programs for repairs to Gateway Education Center.

Dozens of parents and supporters of the special needs school in East Greensboro pleaded with school board members to find the funds to fix the more than $11 million in repairs the school is in need of, instead of closing it.

“What has been done to families here has been needlessly difficult. I urge you to fix our school,” said Dania Ermentrout, a Gateway parent and PTA president.

School board Chairwoman Deena Hayes-Greene and vice-chair and District 1 board member T. Dianne Bellamy-Small voted no.

“I really want parents to understand that I understand it is important to have any child in a stable, clean, safe environment. We have four schools that are in better condition than Gateway is right now. We’re not cold and callous up here. We truly made a decision based on the info that the superintendent gave us that Gateway is not in the best condition for your child,” said Bellamy-Small.

“Even if we worked on Gateway, it would not solve all the problems. We would halfway do it. Is that what we really want?” she added.

The Guilford County Commissioners postponed a vote on an initial $7 million request that was intended to fund CTE or Career and Technical Education programs at six schools, at its April 18 meeting in order to give the school board time to address the issues at Gateway.

Smith High School was estimated to receive the bulk of the funds at $4 million, with the remaining $3 million to be split among the other five schools. With some of that now going towards repairs, GCS Superintendent Sharon Contreras noted that what was left was not enough to complete the career lab renovations for the new CTE sites and be ready for student use by fall 2020.

District 7 GCS board member Byron Gladden suggested using leftover funds from other completed projects, such as Western Guilford’s new gymnasium, to make up the difference to repair Gateway and fully fund the proposed CTE projects.

“I feel that we have an opportunity to have a win-win. We have two projects we have put cushion in that will probably not be used. We can literally have our cake and eat it too, we just have to think about it,” said Gladden.

Lissa Harris with Parents Supporting Parents asked that the board not forget that all children in the GCS district matter.

“While I uplift all the support for this one school, I ask you to pay attention to the fact not all students with disabilities come in a wheelchair,” said Harris. “We have students who need better outcomes than what they are getting.”

The school board also heard from parents in opposition on the closure of Hampton Elementary.

Deborah Jones, former Hampton Elementary principal, urged the board to not just close the school, but to preserve the name and legacy by building something in its place for the community. Founded in the fall of 1964, the school was named for William Milford Hampton, the first African American councilman in the history of Greensboro, N.C.

“That school is the best part of that community. It has the only playground for children in that community. Hampton serves more than just the students that attend,” said Jones.

Gladden noted that Black and Brown children have been left out of the conversation for far too long when it comes to building and fixing schools.
“My predecessors have set a precedent that EC (exceptional children) schools are on a different merit than regular schools. We built schools all around Hampton and Peeler Elementary Schools, but never put a dime into fixing them,” he said.

In the superintendent’s proposed $700 million budget is the recommended closure of Hampton Elementary. The school has been closed since April 15, 2018, after it was severely damaged by a tornado. Students were transferred to other schools, with Hampton operating alongside Reedy Fork Elementary.

Contreras said her recommendation came after learning from a parent survey in April 2019 that not enough parents intended to send their children back to Hampton at Reedy Fork in the fall. Early estimates by district officials say that less than 50 students are expected to attend Hampton at Reedy Fork for the 2019-2020 school year, a decrease from the 297 that were enrolled at the time of the tornado.

Hampton parents also have the option to send their students to a newly zoned school, which will be either Simkins Elementary or Faulkner Elementary, based on their address.

The school district is still waiting to hear back from the insurance company on compensation for the damaged schools. Contreras noted that due to Hampton’s previously existing maintenance problems, district officials are expecting less money from the insurance company. The district has said that proceeds from insurance will be used for the design costs for building a new Hampton-Peeler Elementary School in the future.

The school board hopes the Board of Commissioners will approve the funds at its May 14 meeting.