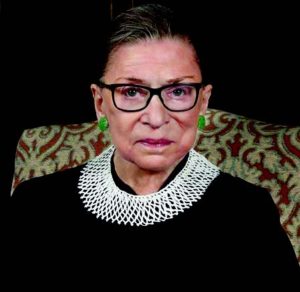 “I attended law school in days when women were not wanted by most members of the legal profession …Yes, there are miles in front, but what a distance we have traveled from the day President Thomas Jefferson told his Secretary of State: ‘The appointment of women to [public] office is an innovation for which the public is not prepared. Nor,’ Jefferson added, ‘am I.’

“The increasingly full use of the talent of all of this Nation’s people holds large promise for the future, but we could not have come to this point — and I surely would not be in this room today — without the determined efforts of men and women who kept dreams of equal citizenship alive in days when few would listen. People like Susan B. Anthony, Elizabeth Cady Stanton, and Harriet Tubman come to mind. I stand on the shoulders of those brave people.”

Justice Ruth Bader Ginsburg stated these words before the Senate Judiciary Committee after becoming the second woman nominated to the United States Supreme Court. She acknowledged the women who paved her way and throughout her lifetime fighting gender discrimination, paved the way for countless others. She was a trailblazer and teacher for all Americans of all genders and races just as Dr. Martin Luther King Jr. was. I adored her.

She is a role model for everyone, especially little girls, but also boys, reminding them that they can be and do anything if they believe in themselves and never give up despite obstacles. She described many instances of discrimination including from a Harvard Law School professor who chided her for taking a man’s spot but she was not deterred. After graduating at the top of her Columbia Law School class no New York City law firm offered her a job but she never gave up and inspired countless girls, women, and men to shatter the glass ceilings women and people of color still face.

The outpouring of grief and gratitude since her death reflects how many feel her loss. House Speaker Nancy Pelosi ensured Justice Ginsburg would be the first woman honored to lie in state at the Capitol. This overdue ‘first,’ which she so richly deserved, was a fitting honor for her tireless fight for equal rights for all.

She received the National Constitution Center’s 2020 Liberty Medal the evening before her passing. In accepting, she said: “It was my great good fortune to have the opportunity to participate in the long effort to place equal citizenship stature for women on the basic human rights agenda. In that regard, I was scarcely an innovator. For generations, brave women and enlightened men in diverse nations pursued that goal, but they did so when society was not yet prepared to listen. I was alive and a lawyer in the late 1960s and the decade commencing in 1970. Conditions of life had so changed that audiences responded positively to pleas that society — men, women, and children — would be well served by removing artificial barriers blocking women’s engagement in many fields of human endeavor — from Bar membership to bar tending, policing, firefighting, piloting planes, even serving on juries. Helping to explain what was wrong about the closed door era was enormously satisfying,”

Too many leaders and citizens seek to turn the clock of progress backwards for girls, women, people of color, and others left behind but we must steadfastly follow Justice Ginsburg’s example and precepts in our families, schools, colleges, and universities for boys and girls and all of our children alike. She lived up to the charge in Deuteronomy framed on the wall of her Supreme Court chambers: “Justice, justice you shall pursue.” May her memory goad us to action to see that every girl child and woman in our nation has the same opportunity as every boy child and man. We must Leave No Child Behind.

Marian Wright Edelman is Founder and President Emerita of the Children’s Defense Fund whose Leave No Child Behind mission is to ensure every child a Healthy Start, a Head Start, a Fair Start, a Safe Start and a Moral Start in life and successful passage to adulthood with the help of caring families and communities. For more information go to childrensdefense.org.