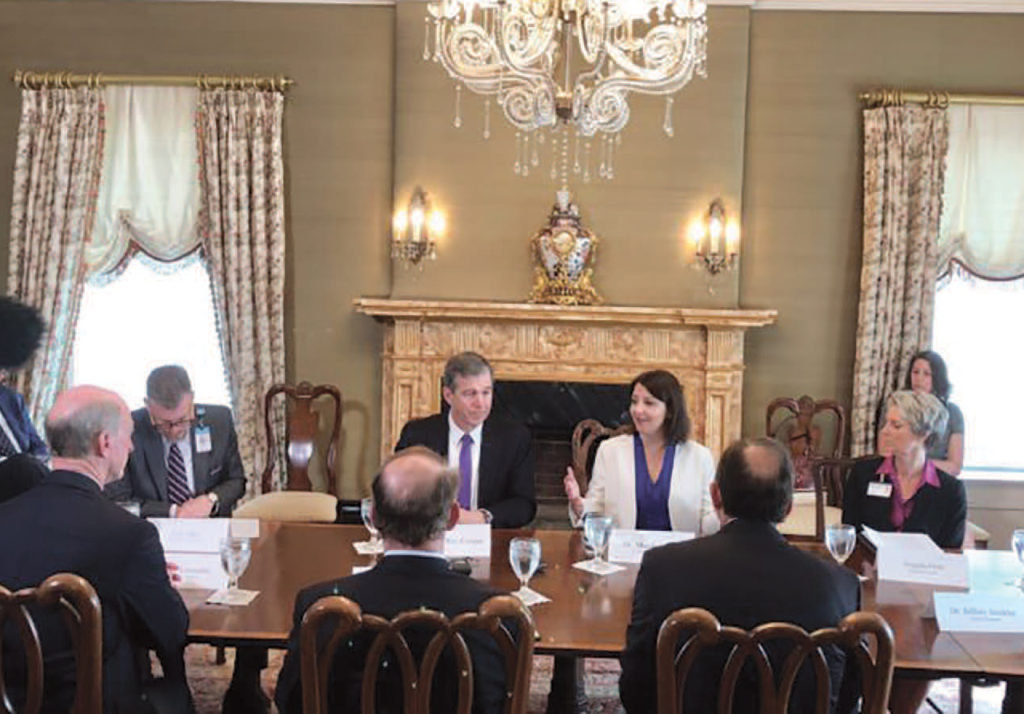 There were some common elements to all their stories. For starters, all of their hospitals are operating on thin margins.

The group nodded in agreement as each talked about excessive use of their emergency departments and the uncompensated care resulting from ED patients who were uninsured or unable to pay.

Adding to their problems, many said they have a difficult time recruiting medical professionals, and that their counties are turning into “doctor deserts.”

The consensus was that Medicaid expansion wouldn’t solve all their problems overnight, but they agreed it would go a long way to relieving pressure on their emergency departments and create a healthier patient population.

“We can talk about the present, but we really need to talk about where we are going to be in three to five years,” Chris Lumsden, CEO of Northern Hospital of Surry County, told the group. “This issue is monumental to us. [Medicaid expansion] is something we can do today that will impact patient care and economic development down the road.”

In North Carolina, there have been six rural hospital closures since 2010. Across the U.S., there have been 104 closures during that same time, according to data compiled by the UNC Sheps Center for Health Services Research.

Cohen said that 80 percent of the hospital closures nationwide occurred in states that didn’t expand Medicaid.

The CEOs’ pleas have some backing from the research. Greg Tung, a health economist from the University of Colorado, found in his research that Medicaid expansion has had a positive impact on hospitals’ financial situations and that they were less likely to close their doors.
Rural hospitals are most at risk for closure in states that did not expand, he said.

“Rural hospitals tend to be in a more financially precarious situation compared to urban hospitals,” Tung told N.C. Health News.
He said this has a trickle-down effect to the rural economy surrounding each institution.

“Rural hospitals are anchor institutions in their communities. They are kind of a pillar of the local community and the local economy, they provide a lot of skilled, well-paying jobs for that area,” he said. “So, when a rural hospital closes, it has a disproportionately large impact on that community, especially in comparison to an urban hospital closure.”

Cooper said there are enough votes to pass a GOP-backed version of Medicaid expansion in the state House right now if the Republican leadership would bring it to the floor for a vote.

He expressed less confidence about prospects in the state Senate.

“Obviously the leadership of the Senate has some concerns about this, but we hope that all of it is negotiable,” he said. “It’s so important for us to take this step here in North Carolina.”

Some have expressed fear that the federal money to expand Medicaid might disappear, but Cooper said he doesn’t think it will. People in Washington D.C. have been trying to do away with these policies for the past two years and have not succeeded, he said.

“They couldn’t kill it,” he said. “One, because people need health care. Two, because Republican and Democrat governors in states that have expanded came to Washington and said, ‘This is working. Don’t take this away.’

“Plus, you can write safeguards into the legislation that can stop coverage if the federal money dries up,” Cooper said. “But I don’t see this happening. If it didn’t happen in the last two years, it’s certainly not going to happen any time soon in a divided Congress.”