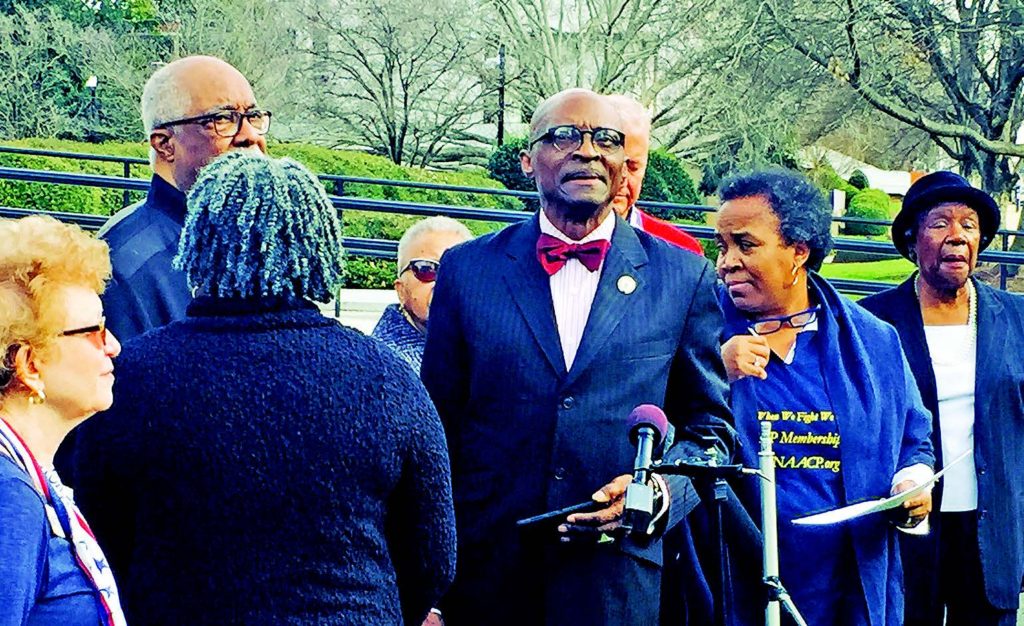 Rev. Dr. T Anthony Spearman, president of the N.C. NAACP, and members of the NAACP say that SB 824 is unconstitutional and racially-biased as passed by the Republican-led N.C. legislature, adding that it violates Section 2 of the 1965 Voting Rights Act, and the 14th and 15th amendments to the U.S. Constitution.
Photo by Cash Michaels / Carolina Peacemaker.

To hear Republicans tell it, U.S. District Court Judge Loretta Biggs is playing politics, legislating from the federal bench in her decision to temporarily block the state’s voter ID law from being implemented during the March 3, 2020 North Carolina primaries.

After all, if 34 other states can compel their citizens to show photo identification at the polls during primaries and general elections, why can’t North Carolina, Republicans ask?
“This last-minute attempt by an activist federal judge to overturn the will of North Carolina voters must be immediately appealed by the Governor’s Board of Elections,” an outraged Rep. Tim Moore, Republican Speaker of the N.C. House said in a statement last Friday.

There is little doubt that Moore, and other North Carolina Republicans are beyond themselves about this latest, unexpected legal development, primarily because there is little legally they can do about it.

Judge Biggs’ action is based on the N.C. NAACP’s December 20, 2018 lawsuit to stop Senate Bill 824, which, based on a state constitutional amendment voters passed a month earlier to approve voter photo identification in the state, was passed to legislatively establish it by law.

The N.C. NAACP alleged that SB 824 was unconstitutional and racially biased as passed by the Republican-led N.C. legislature, adding that it violated Section 2 of the 1965 Voting Rights Act, and the 14th and 15th amendments to the U.S. Constitution.

In doing so, the group alleged that the SB 824 was very similar to the 2013 voter ID law that was ultimately ruled unconstitutional because, in the words of the federal court, it targeted African Americans for voter suppression with “…surgical precision.”

The civil rights group sued Gov. Roy Cooper, and members of the state Board of Elections [SBOE], the officials tasked with implementing and enforcing the law.

Realizing the shrewd legal move left them with no standing, Republican legislative leaders petitioned Judge Biggs last January to become “intervenors” in the suit, but she said “no,” adding that the SBOE, which opposed the N.C. NAACP’s lawsuit initially, would suffice.

However, the SBOE at the time the N.C. NAACP lawsuit was filed was dissolved, and Gov. Cooper had vetoed SB 824, saying that “it was designed to suppress the rights of minority, poor and elderly voters.” The GOP-led legislature still had a super-majority then, and promptly overrode Cooper’s veto.

Thus, at press time, if there is an appeal coming, it will be from either a Democrat-majority SBOE, or Democrat state Attorney General Josh Stein, whose office is tasked with defending the state in court.

All of this leaves Republicans trying to pressure both Stein and the SBOE to appeal Judge Biggs’ ruling, or come up with some legal maneuver that Biggs would be forced to approve of.
Meanwhile, N.C. NAACP Pres. Rev. Dr. T. Anthony Spearman, along with attorney Irving Joyner, chair of the N.C. NAACP Legal Redress Committee, and attorney Caitlan Swain of the nonprofit legal advocacy group “Forward Together” in Durham, rejoiced during a press conference last Friday, driving home the point that, barring an appeal, voter ID is dead for the March 2020 primaries.
Judge Biggs, who sits in the Middle District Court in Winston-Salem, sent notice of her coming ruling on the N.C. NAACP’s petition for a preliminary ruling last Thursday to county BOEs because the SBOE was planning to send information out to voters about voter ID requirements this week.

They expect that trial in which the lawsuit will be heard will proceed, and end in time before the November 2020 elections.

“We applaud the court’s action to stop a discriminatory and poorly-implemented strict photo voter ID law that would have meant long lines at the polls, election chaos for our counties and ultimately disenfranchise eligible voters during the high-turnout 2020 Primary,” said Tomas Lopez, executive director of Democracy N.C. “Now the work must immediately begin to make sure eligible voters know that the rules governing their elections have changed again, while emphasizing that what hasn’t changed is the importance of them making their voices heard in 2020.”

This is just one of two lawsuits the N.C. NAACP has pending against the state’s 2018 voter ID law. The other suit, this one against the legitimacy of the 2018 voter ID constitutional amendment, is pending a decision of the Republican-led state Appellate Court. A decision on that one is expected later this year.

Cash Michaels is an award-winning journalist and writer covering state news for the Carolina Peacemaker. He is based in Cary, N.C.