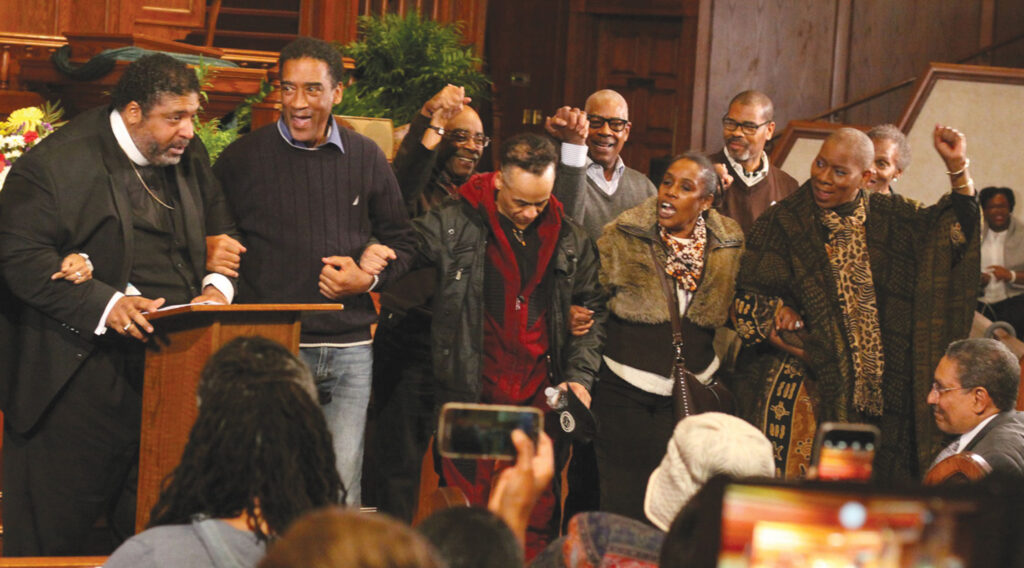 WASHINGTON – In stirring comments that were more sermon than speech, Bishop William J. Barber II derided the Trump administration Tuesday night during an “Alternate State of the Union” gathering.

As Trump delivered his first State of the Union Address at the U.S. Capital, Barber described him as the end-product of more than 100 years of attempts by White extremists to blunt any progress made by African Americans and progressives in the U.S.

“We’re witnessing a fundamental changing of our demographics around the world,” said Barber, a national activist, former president of the North Carolina NAACP and president and senior lecturer of Repairers of the Breach. “We see extremist policies in America today and it’s driven by the growing blackening and browning of America and a fusion of every creed, color and class.”
He continued, “Those who embrace the Make America Great Again slogan are willing to work hard and cheat to undermine what is evolving in America. This is White hegemony and White nationalism strengthened by enormous wealth.”

Rev. Barber’s analysis of Trump’s cynical attacks on non-Whites, Barber’s deconstruction of America’s racial malady and his exhortation for African Americans, progressives and other allies to join the movement against extremism, wrapped up a more than two-hour panel discussion involving leading political and Civil Rights activists, organizers educators, and thinkers in the Black and Latino communities.

The event, arranged and moderated by former News One anchor and news personality Roland Martin, was co-sponsored by the NAACP and titled, ‘The Real State of Our Union’ It was one of dozens of progressive alternatives arranged around the country to counter Trump’s first State of the Union before a joint session of Congress. 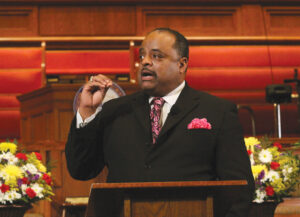 Rev. Barber, well known as an unapologetic voice of resistance to this administration’s hard move to the right, told an audience of several hundred people at Shiloh Baptist Church in Washington, D.C. that America is in the midst of a Third Reconstruction.

“Our discussion aims to put a spotlight on a variety of issues that are vital to our community, and that we are sure will be overlooked in his State of the Union address on Tuesday,” said Martin in a statement released to the press.

Hot topics ranged from attaining economic self-sufficiency, voter mobilization, the rightward tilt of judicial appointments, political and election strategy, organizing and the administration’s attacks against immigrants, the LGBTQ community and anyone not White, heterosexual and male.

“His words, actions and appointments and all we’ve seen is a policy of division,” said Kristen Clarke, president and executive director of the Lawyers’ Committee for Civil Rights Under Law. “He has taken us back decades. We’ve seen a spike in hate crimes, Charlottesville, and his inability to condemn Neo-Nazis … it’s hard not to trace ugly hate and animus to this White House.”
Clarke, Melanie Campbell of the Black Women’s Roundtable, NAACP President Derrick Johnson and other panelists warned about the danger posed to African Americans, other people of color, the poor and the most vulnerable by Trump’s judicial appointments. In his first year, Trump, Senate Majority Leader Mitch McConnell and the Republican leadership have rammed through nominations to federal, district and circuit courts after eight years of holding up or blocking former President Barack Obama’s nominees.

“This is a huge issue,” Clarke explained. There are 140 vacancies in federal courts. The judiciary has always mattered to Black people because it is a place of last resort. Ninety-nine percent of cases are heard in federal and district courts. Ninety-one percent of those Trump is putting forward are White and male and they are the fringe. He’s turning back the clock to the Jim Crow era.”

A panel of millennials spoke with great passion about the failings of the two-party system, their general disdain for both parties and their desire to build infrastructures and institutions for, with and about Black people.

NAACP President Derrick Johnson set the table with his insistence that Black people use their vote wisely. If 28,000 Black voters had not skipped choosing one of the candidates at the top of the ballot, Trump would not have won the election, he said.

“We need to stop being emotional and focus on outcomes,” Johnson said. “We need to understand the political landscape because we seem to have forgotten. In a democracy, the vote is our currency. It’s nation-building time. We have to build it within the rules of building power.”

Dayvon Love, director of Research and Public Policy at Leaders of a Beautiful Struggle, focused on the importance of developing opportunities and a pipeline into politics for African Americans and holding Democrats’ feet to the fire to force them to do right by Black people.

Dr. Greg Carr, chair of Howard University’s History Department, offered caustic comments about Trump and the environment that he and his administration have fostered.

“They’re extremists, there’s no such thing as the United States of America and Mike Pence is a Christian fundamentalist … Mitch McConnell and Paul Ryan are wholly-owned subsidiaries of corporations and the Koch Brothers. Steven Miller has proposed cutting immigration. These people don’t give a damn. We’re appealing to a morality these people have never had.”

Johnson and Campbell stressed the importance of Black people flexing their electoral muscles in the upcoming midterms and the 2020 general elections.

“We’re mad as heck, but we’re being more strategic with our politics,” she said. “We will not have anyone take our vote for granted. We’re seeing a power shift. Black women all over the country are starting political organizations, running and challenging the Democratic Party. More and more Black people don’t think the Democratic Party represents their interests.”