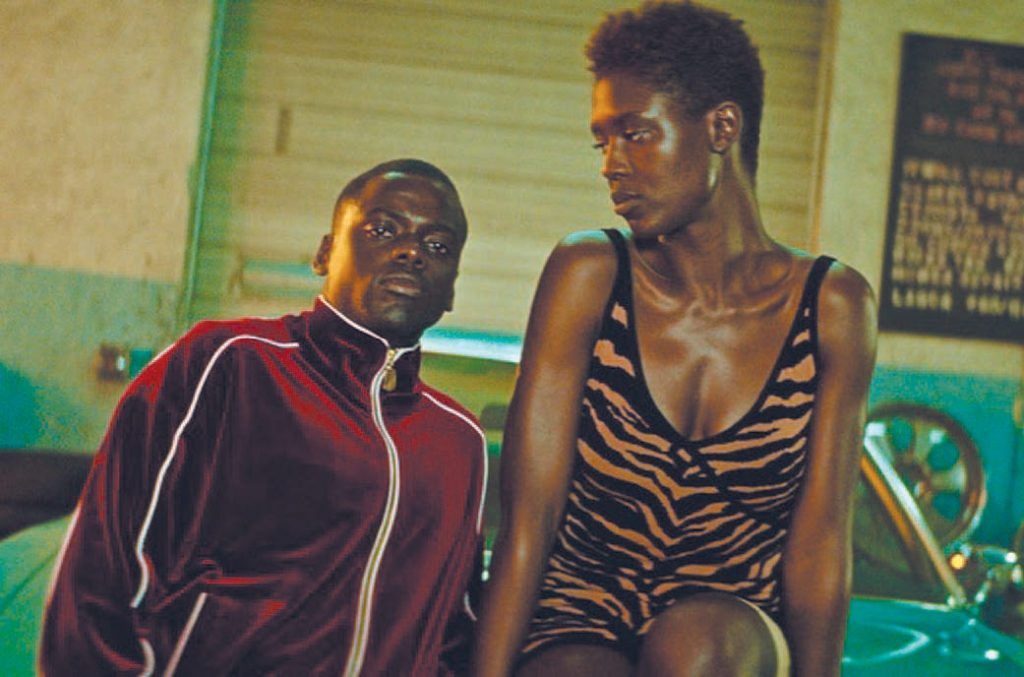 Daniel Kaluuya plays Slim and Jodie Turner-Smith is Queen in this soul-searching allegory hidden inside a crime getaway film.

It’s lyrical. Like an extended poem with waves of emotion, heady rumination, love proclamations and lost souls gathering around a common issue.

Some will recollect the true-life story of Bonnie and Clyde, but they gained fame for crimes and robbing banks. A closer comparison is Thelma & Louise, two feminist icons who were pushed into rebellion. Yet their story never involved an intimacy between the two that included sexual attraction and love. Queen & Slim is on its own path. Groundbreaking for its rich, layered storytelling (Lena Waithe, Emmy-winner TV’s Master of None), stylish direction (Melina Matsoukas, Grammy-winner Best Music Video Beyoncè: Formation), provocative contemplations on race and police abuse and two performances that will redefine how Black men and women are portrayed on screen.

They meet at a diner in nowhere Ohio. She, Queen (Jodie Turner-Smith TV’s Jett), is an aloof and exacting criminal defense lawyer, with braids down her back and a disposition more sour than a lemon. He, Slim (Daniel Kaluuya, Get Out), a salesclerk, is her polar opposite. Congenial, funny, sardonic sloppy. He chews his food with his mouth open, making noises that could wake the dead. It annoys her. He’s completely oblivious. Fate didn’t bring these disparate souls together. Blame it on Tinder.

Driving home from their rendezvous, a siren flares, red and white lights flash and his porcelain-colored Honda Accord is pulled over by a very White and overly aggressive cop (Sturgill Simpson, Grammy-winner Best Country Album “A Sailor’s Guide to Earth”). The car is searched. Nothing is found.

It’s as if the police officer is extra pissed because he can’t find drugs or alcohol. His anger grows. Slim is calm. Queen, as attorneys can be, is indignant. The situation escalates. A gun is drawn and shots are fired. Queen and Slim go on the lam, driving down endless highways, trying to escape. He’s not sure what to do. She: “Keep running until we come up with a better plan.”

In the first five minutes the tension between the two draws you in. Contrary personalities, yet common cultural threads. Conversations about the movie Love Jones and other Black pop knowledge banter set their personae: They are hip, smart, modern African Americans. People you may have known in college, on your 9-5, from a dinner party… They’ve got urbane exteriors. Underneath they are scarred and vulnerable. You want to watch them court and spark. You want them to survive.

This is the mark of brainy, sensitive and socially-aware screenwriting that will likely propel Lena Waithe from TV gigs to steady feature film work. Her mixed bag of indelible characters include: an ex-con uncle (Bokeem Woodbine, Jason’s Lyric); the con’s ladyfriend (Indya Moore, TV’s Pose); a goodwilled sheriff (Benito Martinez, TV’s 13 Reasons Why); and a war vet (Flea, bassist for The Red Hot Chili Peppers).

Police aggression in the Black community ignites a journey that’s laced with intrigue, thrills, narrow escapes, family drama and a romance that goes from highly unlikely to sensual bliss. All of it keeps viewers guessing what’s next — right until the end. For good measure, provocative dialogue expresses the characters’ subjective attitudes. Queen: “Nothing scares a White man more than a Black man on a horse.” Slim: “Why?” Queen: “Because they have to look up to them.”

Between intense conversations, conflicts and deaths, Matsoukas gives the footage time to breath, with carefree moments: Queen sits on the window sill of a gold-colored Mercedes-Benz station wagon, as it travels down a two-lane road. Sun on her face, wind in her hair. In endless sequences of supreme tension, it’s an oasis moment. The kind video directors imagine freely, when other filmmakers do not.

Daniel Kaluuya is a photographer’s gift. The camera lens loves his guy-next-door face, large eyes, full lips and dark complexion. He plays Slim completely understated, tender in the right moments, brave in others. His is a subtle performance, fueled by inner strength. Turner-Smith’s character arc shines as she takes Queen from the impervious, to the needy, to the courageous. In the beginning her long braids weigh her down, just like her cranky disposition. Later, when she’s shorn, it’s as if a duck has left and a swan arrived. Happier. Adaptive. In the mood for love. With a beauty that would shame a goddess.

It’s been a minute since Bokeem Woodbine was in a film that properly displayed his talents. It’s as if his career has come full circle. Moore, Flea, Simpson, Colby Boothman as a convenience store clerk and Jahi Di’Allo Winston as a young martyr complete a compelling supporting cast that turns in superb ensemble acting.

More judicious cutting (editor Pete Beaudreau, Beast of No Nation) could have trimmed the 2hr 12 min runtime. Scenes at the uncle’s house could have been shorter. Chopping off a couple of road sequences might have made the film tighter. But it’s doubtful the target audience will complain about the movie’s rhythm or compass.

The mix of racial/social hot-button issues may make some squirm. Crime/drama/thriller elements will likely keep viewers engrossed. The love story and carnal scenes could inspire couples to hold hands.

These engaging qualities should attract and satiate urban audiences and romantics looking for a unique, soul-searching allegory hidden inside a crime getaway film. Queen: “I’m scared.” Slim; “I’ll be brave enough for the both of us.”