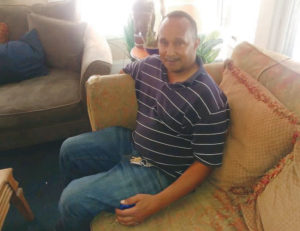 High Point resident Columbus Devontenno was diagnosed with HIV in 1989 and says that although major strides have been made regarding the disease, there is still a stigma. Photo by Yasmine Regester/Carolina Peacemaker

Guilford County is number three in the state for new HIV infections, according to Triad Health Project, a local HIV/AIDS awareness organization.

With hundreds of new HIV cases every year, researchers are developing ways to prevent the spread of HIV, not just treat it.

Triad Health Project is spreading the word about a prescription medication currently on the market called Truvada, a pre-exposure medication that is used in the prevention of HIV.

THP has identified that the highest rates of HIV are among African American men, particularly those who have sex with men. Statistics show that one in seven African Americans are unaware they have the disease. HIV education advocates contend that stigma, fear, discrimination, homophobia and socioeconomic issues places many African Americans at a higher risk for HIV.

The FDA approved pre-exposure prophylaxis, or PrEP, for HIV-negative people in 2012. When taken daily, PrEP can reduce the risk of HIV from sex by more than 90 percent and from intravenous drug use by 70 percent, according to the Centers for Disease Control and Prevention (CDC-P). However, 69 percent of individuals currently on PrEP are White, while only 11 percent are African American.

Scott Trent, Lead Health Educator at Triad Health Project, is urging anyone with risks of being exposed to HIV to take the PrEP medication.

Triad Health Project provides support to individuals living with HIV/AIDS, to their loved ones, and to those at risk for HIV/AIDS. THP began in 1986 as a grassroots effort to address the emerging health crisis and the barriers and discrimination people with HIV and AIDS were facing.

Presently, THP is one of the largest HIV/AIDS service organizations in North Carolina. As a primary community service provider, they offer case management, access to resources, a client food pantry, education and prevention outreach, and free HIV testing. In Greensboro and High Point, there are currently 2,152 people living with HIV.

It is documented that HIV arrived in the United States sometime around 1970, but it didn’t come to the public’s attention until the CDC produced an official report in 1981. Today, there are more than 1.1 million people in the U.S. living with HIV and more than 700,000 people with AIDS have died since the beginning of the epidemic.

HIV, or Human Immunodeficiency Virus, is the virus that causes AIDS. It breaks down the body’s immune system.

For decades, the disease was associated with men who have sex with men, but HIV can be transmitted through semen, breast milk, vaginal secretions and blood and through intravenous drug use. It takes an average of 10 days after exposure to the infection for there to be enough of the virus in the bloodstream to be detected by a viral RNA test.

Sometimes HIV symptoms are similar to the flu. However, the symptoms don’t go away, or they keep coming back. Symptoms can include sudden, unexplained weight loss, constant fatigue, fever or night sweats, diarrhea, dry coughing, swollen glands in the neck, armpit or groin, and pink, blue or purple spots on the skin or in the mouth that resemble bruises.

According to Trent, a person who has acquired HIV and is successfully taking their prescribed medication cannot infect another person once the amount of virus in their body is undetectable.
“Early detection and early treatment is key for not only the individual, but also for public health,” said Trent. “Being HIV positive isn’t the same death sentence it once was.”

In 1987, the first antiretroviral medication for HIV, azidothymidine, more commonly known as AZT, became available. The nearly $10,000 a year prescription required patients to take an AZT pill every four hours, night and day, forever. Today, scientists acknowledge that the amount of AZT is a toxic overdose.

The unknown disease spread quickly across the U.S. in the 1980s and 1990s, taking down hundreds of men, many of whom died within months of being diagnosed. By 1995, AIDS had become the number one killer of men ages 25-44 across the country.

High Point resident Columbus Devontenno was diagnosed with HIV in 1989 and says that although major strides have been made regarding the disease, there is still a stigma.

In the early years of the disease, medical providers kept HIV patients in a separate part of the hospital, which Devontenno said further added to the stigma of the disease. He recounts having to take the elevator to a wing in the basement of a hospital to receive treatment.

“Everyone on the elevator knew what floor you were going to and why you were there. So people were less likely to go to get the treatment they needed,” he said. “But you can’t just look at someone and know if they are positive or not.”

Breakthroughs in HIV treatments have drastically reduced the number of antiviral drugs a person may have to take, down to one pill a day for most people. More than 20 years ago, people were being prescribed what was known as “the AIDS cocktail” which could be up to nearly 23 pills a day for some individuals. Devontenno shared that he went from taking 21 pills a day to only one pill a day.

“I would try to sneak away from my co-workers when I would have to take my pills at work. You didn’t want anyone seeing you,” he said.

There is also a clinical trial currently underway in Guilford County for an injectable HIV treatment, which is administered once a month by the patient’s physician.

THP also runs Higher Ground, a community day center where individuals living with HIV can share a meal and gain emotional support through group therapy, arts therapy and meditation. A 32-year HIV survivor, Devontenno is an active member of Higher Ground and said that he doesn’t know where he would be without it.

“The men’s support group at Higher Ground saves lives,” said Devontenno. “It makes you feel like someone actually cares. You can talk about whatever is on your mind and we all support one another, within the house and outside the house.”

Chase Hanes, house manager for Higher Ground, describes the day center as a welcoming place for all, where people don’t have to hide who they are.

“Higher Ground gives people a place to escape the stigma of living with HIV. It also helps bridge the gap between people who need resources and those who have resources,” said Hanes.

THP advocates locally, regionally, and nationally for individuals and groups infected with or affected by HIV/AIDS. The organization also provides support to other HIV intervention projects, such as Impact Triad with Wake Forest University, a group that works to address the social aspect of the HIV/AIDS epidemic; and The Chicas Project in Winston-Salem, a group that works with transgender and Latina women.

“If we really want to curb this epidemic, then we have to get creative in how we address it. We can’t keep rolling out the same initiatives and expect different results,” said Trent.