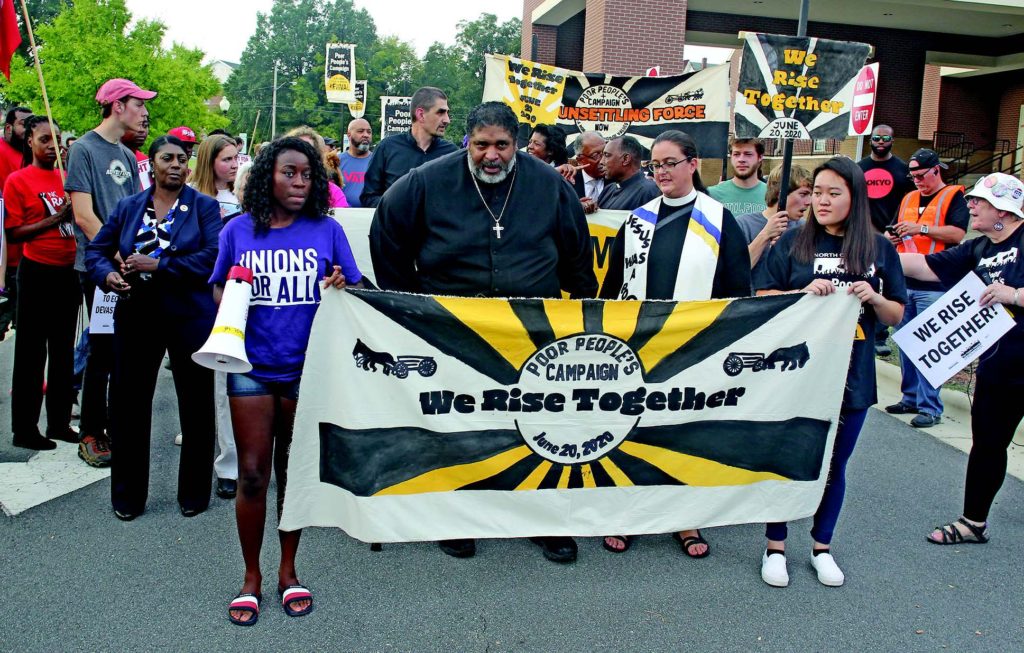 The Poor People’s Campaign (PPC): A National Call for Moral Revival brought its message of eliminating racist and immoral policies to Greensboro on September 30.

“Every attack on immigrants ought to cause us to be agitated. Every vote against old and sick people should embolden our fight for what is right. We must fight for what is right and have an eternal dissatisfaction with injustice. If all of us merge our movements together, we can be powerful,” said Rev. Barber, president of the Repairers of the Breach, one of the non-profit organizations leading the Poor People’s Campaign in partnership with the Kairos Center for Religions, Rights, and Social Justice, the Popular Education Project, and hundreds of other local and national partners.

The Poor People’s Campaign: A National Call for Moral Revival is calling on people across the country to challenge systems in place that discriminate against the poor and people of color. The “revived” campaign is building upon the original 1968 Poor People’s Campaign, led by the late Rev. Dr. Martin Luther King Jr. It was a multi-cultural, multi-faith movement that brought thousands of Americans living in poverty to the national mall to demand better living conditions and higher wages.

Monday’s stop in Greensboro is part of a 25-state “We Must Do M.O.R.E.” Tour from September 2019 to May 2020. M.O.R.E. stands for mobilizing, organizing, registering and educating people for the movement who will vote.

In front of more than 200 people at Shiloh on Monday, Rev. Theoharis acknowledged Greensboro’s storied history in the Civil Rights movement and its involvement in other social justice movements as a place that has committed itself to justice.

“We must do more in such a time as this,” said Rev. Theoharis, an ordained Presbyterian minister and the director of the Kairos Center for Religions, Rights, and Social Justice. “Here in Greensboro we commit to rising up for justice. We pledge to do more.”

The PPC’s nine month tour launched on September 16 in El Paso, Texas and will lead into the Mass Poor People’s Assembly and Moral March on Washington on June 20, 2020, where thousands of poor people and moral agents will gather at the nation’s capitol.

Since its inception in 2017, the Poor People’s Campaign has traveled to more than 30 states across the country, spreading the movement’s Moral Agenda and Declaration of Fundamental Rights, a document that focuses on challenging systemic racism, poverty, the war economy, ecological devastation and the nation’s distorted narrative of religious nationalism.

According to the PPC, there 140 million poor and low-income people in the United States, while 41 million Americans live below the federal poverty line. The PPC also presents a “Moral Budget” in the agenda which reports that cuts in military spending, fair taxes on the wealthy, and savings from ending mass incarceration can help meet the demands of the poor and address widespread systemic injustices. The budget also demands a $15 federal minimum wage and the expansion of Medicaid, among other things.

“What does it cost for America to keep people poor? Families can go down the street and buy unleaded gas, but can’t pour unleaded water from their faucet,” said Rev. Barber. “We must educate people. This movement — make no mistake about it — is not about merely saving the Democratic party or simply criticizing the Republican party. This movement is about saving the soul of this nation,” said Barber.

Local residents also had a chance to share their stories and why the work that the PPC is doing is important to them. Greensboro resident, Minerva Cisneros Garcia spent the last two years living in sanctuary with her family at the Congregational United Church of Christ in Greensboro, pastored by Rev. Julie Peeples. She was granted a green card in May 2019 and applauded the PPC’s fight for fair immigration reform.

“Please keep fighting for what you know in your heart is right. Please vote for candidates who believe in protecting our environment, human rights, peace, health and fairness for all people,” said Garcia.

“Let us walk together, struggle together, learn together. We are on a journey and we are not turning back,” said Rev. Johnson.