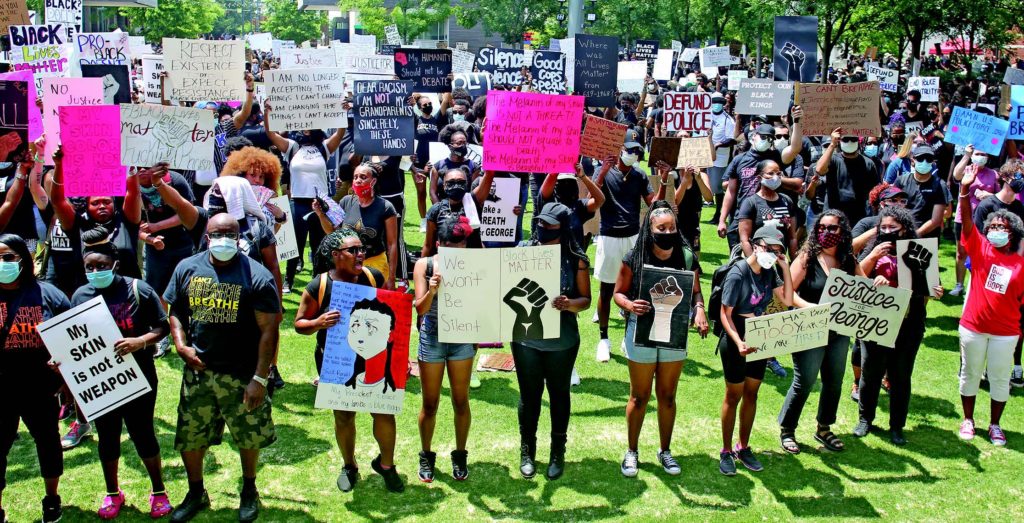 Hundreds gathered at LeBauer Park to remember George Floyd and other unarmed African Americans, who have lost their lives during encounters with law enforcement officers. Photos by Joe Daniels/Carolina Peacemaker

“It was one of the most frightening moments of my life. I felt like a target. A moment in which I didn’t know if I would get to see my mom again,” said Quinton Jones, a Greensboro resident and protestor.

Jones, one of five men who were arrested after Greensboro demonstrations on June 2, shared his story in front of thousands of protestors in LeBauer Park in Downtown Greensboro on June 7. The #BlackoutNC protest was organized by Greensboro Rising, a collective of local organizers helping to mobilize the community around issues of killing, brutalization, harassment and degradation of Black people by the police.

Protests in Greensboro and globally during a time of the COVID -19 pandemic, were triggered by video footage of the death of Minneapolis, Minn. resident George Floyd. Floyd was killed on May 25 when Minneapolis Police officer Derek Chauvin, pressed his knee against the neck of Floyd for nearly nine minutes as three additional officers physically restrained and handcuffed him.

Floyd cried out, “I can’t breathe” and for his deceased mother. Floyd’s death in police custody sparked a series of global protests denouncing police brutality against Black people. The four Minneapolis police officers: Chauvin, Tou Thao, Thomas Lane and J Alexander Kueng, have been fired from the department, arrested and charged with Floyd’s murder.

At the Greensboro rally, Jones continued, “In the same state where American citizens can walk around in Raleigh with rifles, we African American citizens are treated as threats. When we are just trying to protect ourselves and other protestors from those who may wish us harm. All we wish is to be treated fairly and as regular human beings and citizens in this great state of North Carolina.”

He, along with Jonathan Slaughter, Remontre Legrand, Dashawn McKinnon and Kacey Foster, are being called The Protest 5. The young men were each arrested and charged with possession of a weapon at a parade. They assert they were unfairly targeted based on race and arrested using excessive force. The men say they are fighting against biased policing and the fact they are not allowed the same constitutional freedoms that they see are continually afforded to White citizens.

“We were arrested for exercising our first and second amendment rights in America,” said Foster. “That same equality that we were protesting for throughout the week, is the same equality that the Greensboro police did not show us.”

The Protest 5 was just one example of alleged victims of police brutality who were recognized at the protest.

Richard Hughes, a pastor at St. James Presbyterian Church opened Sunday’s rally with a prayer. Wesley Morris of Faith Community Church and Beloved Community Center followed, detailing Greensboro’s history of inequality and police brutality. He spoke about the 1979 Greensboro Massacre and the community-led initiative around a Truth and Reconciliation Commission. He noted that the issues of police brutality are not new, but need to be eliminated because the city continues to fail to address them.

“Today we are here to recover our histories and take national issues and bring them home,” said Morris, reciting the names of five Communist Worker’s Party members, who were killed in 1979 during a protest at Morningside Homes when Klansmen and members of the American Nazi Party opened fire on the unarmed crowd.

In Greensboro however, there are families who say they are still fighting for justice for their loved ones who died at the hands of police.

The family of Marcus Deon Smith, the 38-year-old unarmed African American man who died in GPD custody in 2018 after being hogtied by officers, also addressed the crowd.

“To young mothers, old mothers, grandmothers – you would not want to be standing where I am today,” said Mary Smith, Marcus Smith’s mother. “He was hogtied, suffocated and died on the ground just the same way that George Floyd died. Homicide. He was hogtied so tight that his arm hemorrhaged.”

Greensboro Mayor Nancy Vaughan went on record in January 2019 saying that she did not believe there needed to be an investigation of Smith’s death. After months of community pressure, the City Council voted to launch an independent investigation.

Smith’s mother told protestors to address their frustrations with City Council through their vote in the next municipal elections.

“We’ve traveled this road many times only to be laughed at by city council. We won’t ever stop fighting for justice for Marcus. We need y’all to fight. Don’t stop fighting, don’t stop hoping and don’t stop praying, we have got to get justice. This is just not a one-time fight. This is a fight for every single time that we have been treated unjustly,” she said.

Greensboro Rising has released a 10-point list of demands to the Greensboro City Council. Number one on the list is for the city to make amends to the family of Marcus Smith.

The demands go on to include defunding the police and instead, fund Crisis Intervention and Recreation Centers, stop police use of excessive and violent force, stop physically harming and arresting people who are not physically harming others, equal and fair treatment of the LGBTQ community and people experiencing homelessness, end arrests for marijuana, publicly share police department data, require police to get signed permission before completing a non-warrant search, and allow the Police Community Review Board to hold the police accountable.

Mayor Nancy Vaughan has already addressed one point on the list, which was to end the citywide curfew, which was lifted on Monday, June 8.

Armed with BLM shirts, signs and face masks, the nearly four hour #BlackoutNC rally ended with a march through downtown Greensboro. Greensboro Rising is also working in tandem with Guilford For All, a local organizing group focused on eliminating the same issues across the whole county.

On Monday, June 8, Greensboro Police Chief Brian James announced that the department is prohibiting the use of choke and strangleholds, a tactic that Greensboro officers are not trained in and have never been authorized to do. The policy also requires that an officer intervene verbally and physically to halt the use of excessive force.

On the west side of the city, a separate group of more than 300 protestors, which included a motorcade, led a peaceful demonstration through Walmart on West Wendover Avenue and stopped traffic on the busy street and I-40 for a few hours on Sunday.

Protest organizer, Anthony “AJ” Morgan noted that he felt it was important to take the protest to other parts of town where people may feel unaffected by the movement.

“Why are we marching just in our communities? What about the White people over there eating wine and cheese, thinking nothing is going on,” said Morgan.

“We are fighting for a systemic change. I feel like in order for there to really be change we have to affect the whole justice system scale,” Morgan added. “It’s not about policy, it’s not about police brutality, it’s about a whole entire system of wrong that has to be rewritten.”

A vehicle procession honoring the Black lives lost at the hands of police took place on Tuesday, June 9. The protest car processional began at Union Square Campus on East Gate City Blvd, moved through downtown Greensboro, and ended at Maplewood Cemetery, where four of the five people killed during the 1979 Greensboro Massacre are buried. Organizers of the car protest said it was an opportunity for people who were social distancing, the differently-abled and the elderly to participate in the demonstrations.

More information on the community’s demands can be found at www.greensbororising.wordpress.com or at www.carolinafederation.org/guilfordforall.