Police Brutality and Racism in the U.S. and Latin America 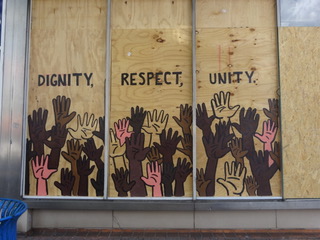 On May 25, 2020, a convenience store employee called 911 and told the police there was a possible fraudulent situation involving a counterfeit $20 bill. Shortly after, the suspect was unconscious and pinned beneath three police officers, showing no signs of life. An hour and twenty minutes later, George Floyd, a 46-year-old black man, was pronounced dead at a hospital. This tragic event occurred in Minneapolis, a major city in the state of Minnesota in the United States of America. Six days prior to Mr. Floyd’s death, on May 19, Anderson Arboleda, a 19-year-old Black man in the region of Cauca, Colombia, South America, was violently attacked and struck several times on the head by the police for disobeying the government’s “stay at home” order due to the current COVID-19 pandemic. Immediately after the incident, Mr. Arboleda started vomiting and experienced sharp headaches. Three days after the incident and after having been taken to two different hospitals by his family, he died of brain injuries.

Both of these deaths have a common denominator: the victims were Black people who died as a result of injuries inflicted by the police. Although it is widely known that police brutality is a civil rights violation, the level of attention and the discourse around this issue manifests differently in the United States than in does in Latin America. There are research and advocacy groups in the United states, for example, that collect data pertaining to demographic differences among those victims. One of them is called Mapping Police Violence, in which we find that 1,098 people were killed by the police in the United States in 2019. Twenty four percent of them were Black. What is clear from this data is that Black people are more likely than White people to die at the hands of the police in the United States. In Latin America, however, information about issues of police brutality are less known. One of the reasons is that only a few of these countries—Brazil, Colombia, and Mexico, for example—provide statistical information about this type of violence and disparities by race. Another reason is the historically systematic effort of denying the existence of racism in all Latin American countries.

While there are approximately 41 million people who identify as African American in the United States, there are about 133 million people who identify as Afro descendant in Latin America. Whereas conversations about racism are part of the mainstream media in the United States, Latin American media outlets almost never discuss this issue. As a matter of fact, for Afro-Latinos, being discriminated against because of the color of their skin has been so normalized that they don’t recognize it as racism. Mexican actor Tenoch Huerta says that “La magia del racismo y el clasismo en México es que no lo vemos. Ni siquiera lo notamos y, cuando alguien nos lo señala, nos ofendemos y nos enojamos de que nos llamen racistas y clasistas.” (The magic of racism and classism in Mexico is that we don’t see it. We don’t even notice it, and when we are called out on it, we are offended and get upset for being called racist and classist.) Mr. Tenoch is referring to the false but popular idea that Latin America is less racist than the United States. Dr. Alejandro De la Fuente, Director of Afro-Latin American Research Institute at Harvard University, agrees and says that “there is an existing consensus in Latin America that racism is unacceptable and embarrassing.” He continues by saying that “racial discrimination, systemic racism, and the exclusion of Afro-descendants from national projects, and also citizenship projects, are common realities in all the Americas.” In these ways, Dr. de la Fuente emphasizes the systemic and parallel forms of racism towards Afro-descendants in Latin America and the United States.

Some organizations go as far as to express that denying racism in Latin America creates an issue of “double victimization” for Afro-Latinos. For example, the Comisión Interamericana de Derechos Humanos and information from Grupo Banco Mundial published in 2018, confirms that Afro-descendants in Latin America are two and a half times more likely to live in poverty than whites and mestizos. Also, because of structural discrimination, Afro-Latinos have higher unemployment rates, are underrepresented in leadership positions, and are less likely to be part of decision-making bodies in the societies where they live. Additionally, protection from law enforcement tend to exclude Afro-Latinos, causing a higher rate of victimization as a result of police brutality. Mónica Oliveira, the leader of Red de Mujeres de Pernambuco, report that 6,200 people were killed by the police in Brazil in 2019, 75% of whom were Black. Also, the social organization Temblores recorded nearly one thousand cases of police brutality in Colombia between 2017 and 2018. In Latin America, the majority of these cases go unpunished, with little to no attention in the media.

In the United States, on the other hand, private and street cameras are being used more and more to capture violent encounters with the police in real time. In the case of Mr. Floyd, for example, the anguish of his last eight minutes and forty-six seconds of life were captured on video. These images circulated the world and prompted protests around the globe. People of all ages, races, and creeds were compelled to demand major police reforms and the elimination of deadly tactics that disproportionally target Black people.

Black Lives Matter, an activist movement that began some five years ago advocating non-violent civil disobedience in protest against incidents of police brutality against African-Americans, would become a powerful and visible phenomena across the United States with support from around the world in the early summer. Decentralized in its leadership, BLM gained mass support following the murder of Mr. Floyd at the hands of the police and inspired protests against police brutality in Latin America. Some images of these protests that have circulated the world come from Mexico, Brazil, Colombia, among other countries in Latin America.

As we now see, police brutality and racism is as much of a social in/justice issue in the United States as it is in Latin America.

Nodia Mena is Garifuna—of African and Indigenous descent—from Honduras and serves as a Coordinator of the Afro-Latin American/Latinx Studies Project at UNC Greensboro, where she is a doctoral student in the Department of Educational Leadership and Cultural Foundations.