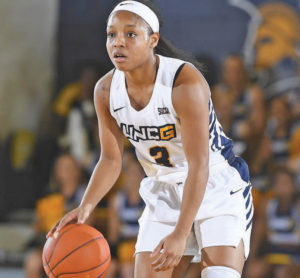 The Southern Conference named Alexis Pitchford of UNC Greensboro a nominee for the 2020 NCAA Woman of the Year award.

The Southern Conference (SoCon) named Alexis Pitchford of UNC Greensboro (UNCG) and Natalie Srinivasan of Furman as its nominees for the 2020 NCAA Woman of the Year award.

Selected from a program-record pool of 605 school nominees, the 161 conference-level nominees represent student-athletes from 21 different sports spanning all three NCAA divisions. Of those nominated, 59 nominees competed in Division I, 39 in Division II, and 63 in Division III.

The NCAA Woman of the Year program is rooted in Title IX and has recognized graduating female college athletes for excellence in academics, athletics, community service, and leadership since its inception in 1991. “I’m beyond grateful for the Southern Conference deciding to select me as a Woman of the Year candidate,” Pitchford said. “Our conference is full of women who’ve overcome personal battles and exterior barriers, and I appreciate my efforts and accomplishments being recognized. My four years at UNCG will be cherished, forever.”

“We are proud of AP and everything that she’s accomplished,” UNCG head women’s basketball coach Trina Patterson said. “This is a great honor for her. She’s very deserving of this recognition and it couldn’t happen to a better person. She’s a great ambassador for women’s basketball. While she helped us win a championship, she’ll be remembered for being a terrific teammate, excellent student, and a positive role model.”

In 2019-20, the passionate Pitchford helped UNCG to a share of the SoCon regular-season title, its first since 2001-02, and its first appearance in the championship final since 2006.

The Spartans won 23 games, a school record at the Division I level. Pitchford started 17 of UNCG’s 32 contests on the year, including 11 of 14 SoCon games, and led the squad with 94 assists. As a freshman, she helped the Spartans reach the title game of the Women’s Basketball.

The Top 30 honorees will be celebrated and the 2020 NCAA Woman of the Year will be named this fall.

“Playing sports is the best way for women to break down gender barriers in today’s generation,” Pitchford said in her Woman of the Year essay. “It’s about bringing attention to women who are accomplishing amazing things that are not receiving the proper attention from mainstream sports media. Young girls and women get discouraged from men receiving more attention, or attaining sports jobs before they do, but we, as women, cannot quit.”