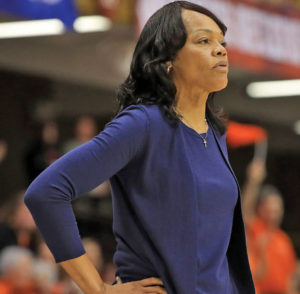 UNCG women’s basketball Head Coach Trina Patterson has been named to the first-ever Achieving Coaching Excellence College Basketball Coaching Honor Roll recently, after guiding the Spartans to a share of the regular season SoCon title and an appearance in the conference tournament final.

Patterson was one of 11 NCAA Division I women’s basketball coaches to be named to the inaugural honor roll, which recognizes leaders in women’s and men’s college basketball who demonstrate tenets of coaching excellence that include on and off the court performance, community involvement, and serving as champions for college basketball, their coaching peers and the coaching profession.

In her fourth year at the helm, Patterson led UNCG to its first conference title since 2002 while the team’s 23 wins are the most in Division I program history. She earned her second SoCon Coach of the Year designation during the 2019-20 campaign, while guiding a pair of Spartans to All-Conference honors and guard Nadine Soliman to a SoCon Player of the Year recognition.