The Dudley Lady Panthers extended their winning streak to seven games with a 78-12 Piedmont Triad 3-A Conference victory over Smith. 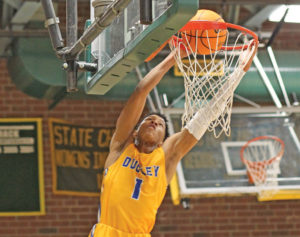 In the nightcap, Dudley upset Smith by a score of 73-53. The win was a total team effort with four players scoring in double figures.

Senior Darien Wynn led the way with 31 points; junior Ayden Gamble had 19 points while juniors Franklin Stockon and Jahree Braswell added 11 points apiece. Dudley led 23-22 at the half before stretching the lead to 50-39 late in the third quarter.

Dudley kept Smith at bay with timely shooting. Smith turned the ball over 21 times and Dudley held Silas Mason at bay for most of the game. The Panthers also out rebounded the Eagles, especially on their offensive glass.

Smith dropped into a two-way tie for second in the Piedmont Triad 3-A with Parkland at 15-5 overall, 4-2 in the conference, while fifth place Dudley moved to 14-5, 2-4.