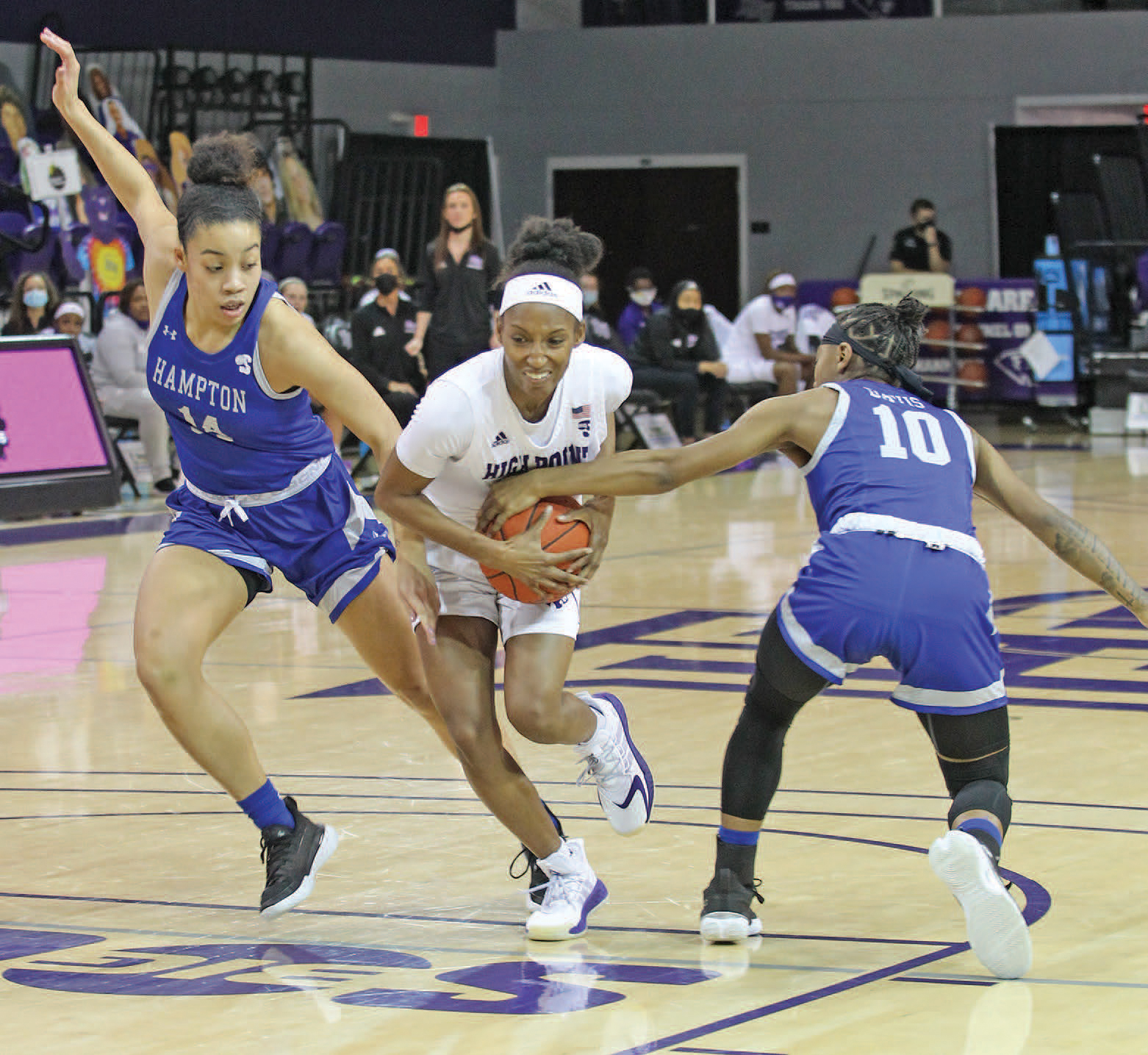 HIGH POINT – Led by redshirt sophomore Jenson Edwards with a career-high 22 points, the High Point University women’s basketball team won its fifth game in a row with a 79-55 victory over Hampton University, Friday afternoon (Feb. 19). It was the first game back at home in the Millis Center for HPU in 34 days, ending the third-longest stretch of days between home games in a single season in program history.

A total of four Panthers scored in double digits, making it nine such games on the season for the Purple and White – all nine of which HPU has come out victorious. High Point has largely dominated the games winning by an average of 18.8 points in the nine games.

Junior Skyler Curran was second in scoring with 16 points, followed by sophomore Callie Scheier with 14 after returning to the starting lineup for the first time in nine games. Curran nearly recorded her fifth double-double of the season, grabbing nine rebounds to lead the team.

Freshman Claire Wyatt continued her torrid start in the month of February, notching her fifth game in double digits of the last six after scoring 13 points. Redshirt sophomore Courtney Meadows had a strong game distributing the ball, dishing out a season-high five assists to lead the team and finish one shy of her career-best. 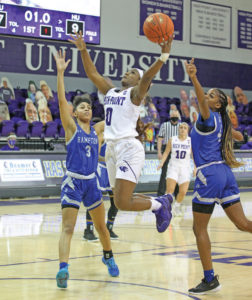 “I’m happy that we got a win but I think we were a little sloppy in some areas defensively at points,” head coach Chelsea Banbury said after the win. “Hampton was attacking the basket and we didn’t do a great job of guarding without fouling them. We did make a run in the second quarter and a little bit in the third quarter to extend our lead and make plays and we were able to come out with a win.

The Panthers scored the first six points of the game, forcing Hampton to take an early timeout. Edwards got right to it, dropping in two free throws and pulling up in the paint for the first four, followed by a runner from Curran after a Lady Pirate turnover. Hampton found the hoop from the floor two times in a row after that to get on the board but HPU answered with an 11-2 run to take a double-digit lead, 17-6. Hampton converted a three-point play with 30 seconds left to cut the lead to eight and Meadows hit a free throw in the final seconds of the quarter to give High Point an 18-9 lead at the end of one.

HPU’s defense put the clamps on early in the second quarter, holding the Lady Pirates without a field goal for more than five minutes of the frame. High Point used the Hampton dry spell to build a 20-point lead, opening the quarter on a 12-0 run. Curran, Wyatt and Edwards each scored in the first two minutes of the second and then Curran and Scheier hit back-to-back threes on consecutive possessions to give the Panthers a 30-9 lead four minutes into the period.

Hampton finally got on the board in the second with a pair of free throws and then hit from the floor on its next possession. The Lady Pirates cut the lead to 16 after some more free throws and another bucket, but only connected once more as High Point ended the half on a 9-2 run, with Edwards scoring the final four points before the break to give the Purple and White a 41-18 lead at halftime. Edwards almost single-handedly outscored the visitors in the first half, ending with 15 points at the break to go along with four rebounds while only missing a minute of action on the court.

The second half was a much closer affair, with High Point only outscoring Hampton by one in the entire half. The one-point difference came in the third quarter, with HPU outscoring the Lady Pirates 20-19 coming out of the break. Curran scored four quick points to start the half and Edwards knocked down a mid-range jumper to give High Point its largest lead of the game at 27 points, 47-20.