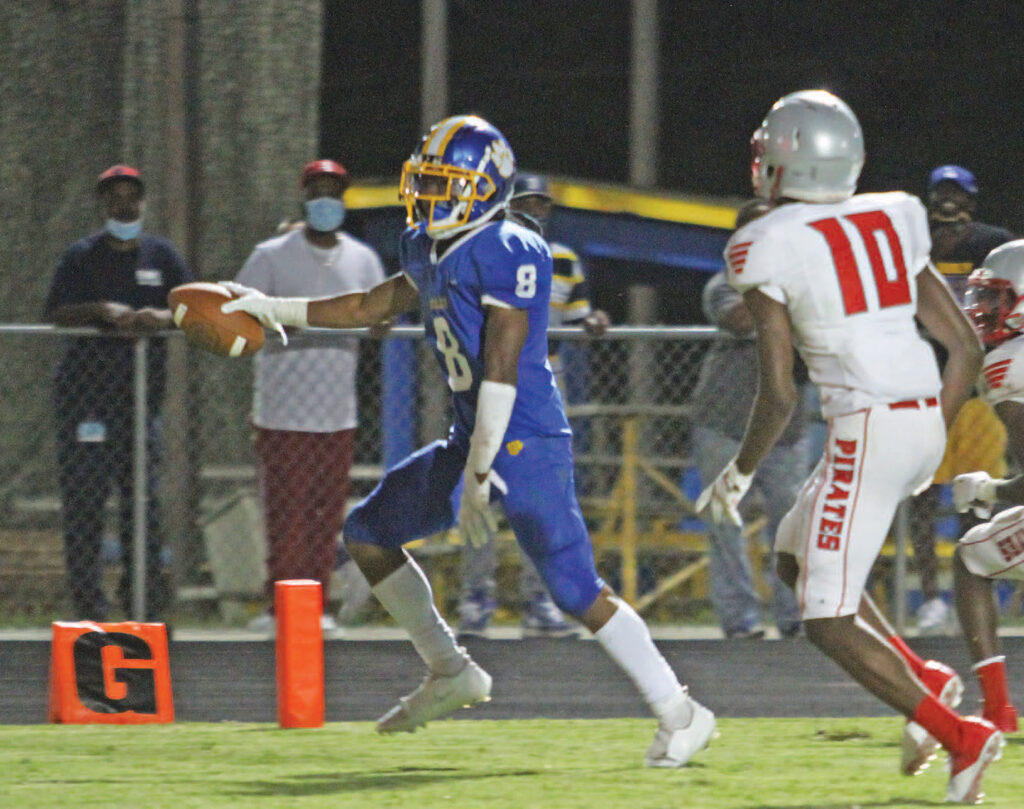 Dudley junior receiver R. J. Baker scores on the last play of the first half on a 31-yard pass from QB Domaine Vann. Joe Daniels/Carolina Peacemaker.

The Dudley Panthers won a home non-conference game against the Page Pirates at J.A. Tarpley Stadium. The Panthers won an ugly 18-7 game, where they were penalized 17 times for 155-yards. They had eight penalties in the first quarter for 70-yards alone. Two other penalties erased touchdown runs. “We had a lot of mental mistakes, personal fouls, unsportsmanlike conducts,” defensive coordinator Brandon Anderson said. “We have to clean it up as of tonight.”

Page marched 51 yards late in the first quarter aided by two Dudley penalties with senior Trevon Hester scoring on a one yard run and junior Tylar Elliott kicking the extra-point with 11:30 in the second quarter giving the Pirates a 7-6 lead. Dudley posted two more scores in the second quarter on a 36-yard pass from freshman QB Domaine Vann to senior Mehki Wall on a fourth-and-three and a 31-yard pass from Vann to R.J. Baker on the last play of the half. After the Page score, the Panthers held the Pirates to just 92 yards of offense. With starting senior QB Jahmier Slade out with an injury and head coach Steven Davis quarantining after a positive COVID-19 test, the Panthers’ offense struggled for most of the game against a Page team that was 0-7 during the spring season.

“This is a different Page team from our winless spring season,” said second year head coach Doug Robertson. The Pirates started four drives at their 40 or better, but failed to capitalize, scoring just once.