Panthers on the prowl, advance to 3A-Regional 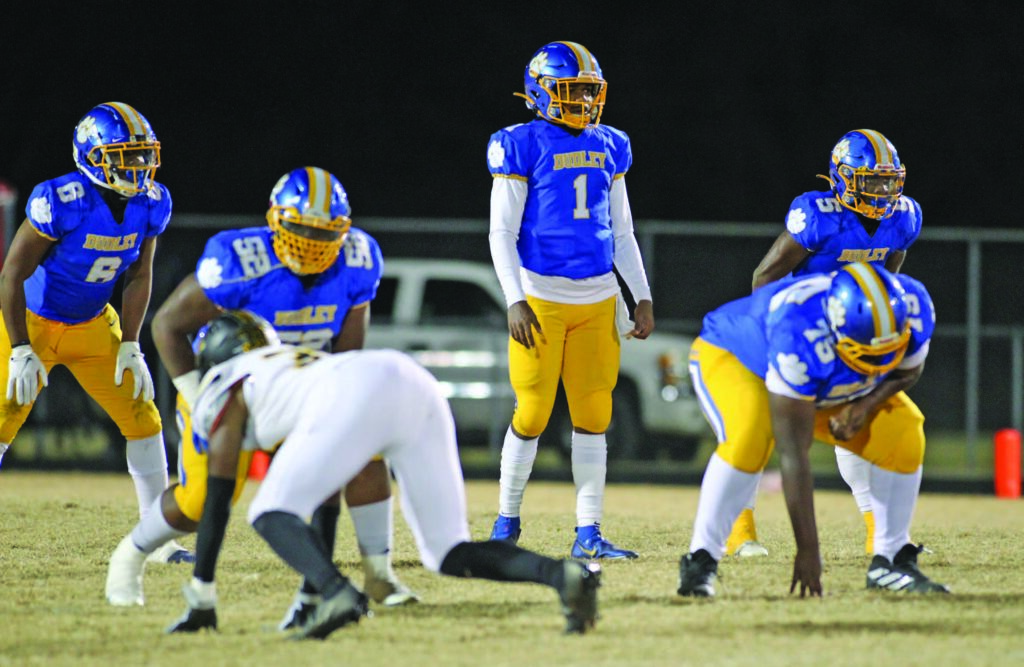 In the fourth round of the NCHSSA 3-A play-offs, Dudley Panthers’ quarterback Jahmier Slade (Sr., #1) finished with 7-of-13 passes for 137-yards and two touchdowns, while rushing for 155-yards on 10 attempts for the victorious Panthers against the Statesville Greyhounds. Photo by Joe Daniels/Carolina Peacemaker. 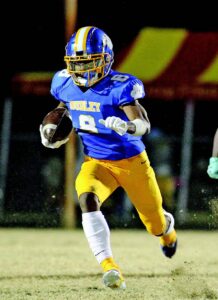 Dudley junior receiver R.J. Baker, had two catches for 93-yards and two touchdowns in a fourth round NCHSAA 3-A playoff game against Statesville. Photo by Joe Daniels/Carolina Peacemaker

STATESVILLE, N.C. – The Dudley Panthers continued their quest for a 3-A state championship with a convincing 20-6 win over the Statesville Greyhounds. With the win, Dudley tallied a 13-1 record. While the previous unbeaten Greyhounds fell to 12-1.

This Friday, December 3, the Panthers will host Belmont South Point (11-3) in a 3-A West Regional Championship game at J.A Tarpley Stadium starting at 7 p.m.

In play against the Statesville Greyhounds, the Panthers began their second offensive possession by covering 80-yards in two plays.

Dudley quarterback, senior Jahmier Slade, raced 79-yards to the Greyhounds’ five-yard line. Next, K.J. Morehead scored on a five-yard run. The PAT failed. Panther R.J. Baker scored in the second quarter on a quarterback B. Slade 70-yard pass. Dudley led 12-0 at the break. Baker caught another touchdown pass in the fourth quarter and Dudley’s two-point conversion lifted the score to 20-0. Statesville scored with three minutes remaining in the game but the PAT failed.

Statesville quarterback Zamari Stevenson rushed for 37 yards and completed 19 of 31 passes for 168 yards. Twelve of his completions came in the second half when the Greyhounds were in a must pass mode.

Dudley Head Coach Steven Davis said he was confident his defense could take away the run against No. 2 seed Statesville (12-1) and it did, particularly in the first half, when the Greyhounds were held to just 27-yards on 19 attempts.

“We liked our front seven against their group and it showed all night,” Davis said. “Other than their quarterback scrambling around – and he’s a good athlete, give him credit – we did the job. Six points against an undefeated team is not bad.”

The Panthers were led offensively by senior quarterback Slade who completed 7-of-13 passes for 137-yards, two touchdowns, while rushing for 155 yards on 10 attempts. Dudley receiver R.J. Baker (Jr.) finished with two catches for 93-yards and two touchdowns. On the negative side, Dudley was penalized 17 times for 108 yards. Dudley senior running back Michael Shaw left the game in the third quarter with a possible concussion. He may miss this week’s home advantage play-off game.

Defensively, the Panthers are clicking on all cylinders. In three playoff games they held their opponents to just 26 points, while the offense scored 106 points. The Panthers’ defense was led by a host of players such as: Jhyheem Pittman with 11 tackles, Jaylan Richmond with nine tackles (Sr., LB), Logan Wright with eight (Jr., DL), Jeremiah Barnes (Sr., LB) and Kafi Abass (Jr., LB) with seven apiece, while K.J. Morehead (Sr., RB) added six.

If the Panthers defeat Belmont South Point this Friday, they will head to the 3A-State Championship game at Kenan Stadium in Chapel Hill on Friday, Dec.10 at 7:30 p.m.